“DO YOU LIKE TO PLAY? What if I told you that play can change our world?”

With these questions, Dina Buchbinder MC/MPA 2016 invites listeners to connect to the best parts of themselves: the parts that share, that play fairly, and that include others. “If we all learned how to share,” she says, “we wouldn’t have so many problems in the world.”

Buchbinder took her passion for improving the world and created a nonprofit—Education for Sharing (E4S)—that builds better, more empathetic citizens through the power of play. E4S’s fun and creative games prompt children ages six to 13 and their caregivers to reflect and act on global challenges and civic values. She ties the lessons to the UN’s Sustainable Development Goals, a set of aspirations that range from ending poverty to creating a peaceful world, both to provide purpose and to measure progress. 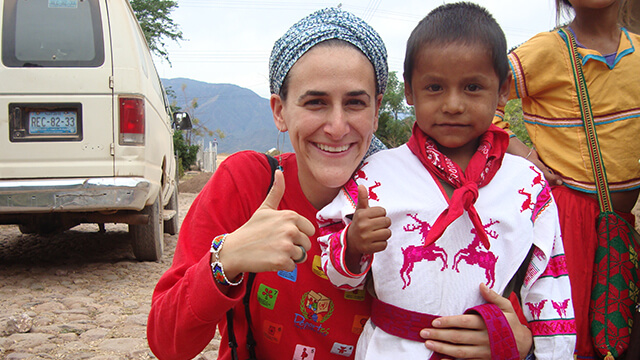 I’ll never forget what he said: ‘The intrinsic value of what you’re doing needs no economic explanation.’ That was so important to hear.

Take goal ball, a team sport originally designed for visually impaired individuals. “It’s like handball, except the ball has a rattle inside that makes a sound,” Buchbinder says. Before the game begins, players are blindfolded. Then each team tries to score on the other. “This game has a very direct connection with fair play and empathy,” she says. At the end of every session, E4S creates a “circle of reflection.” The players discuss the difficulties of the game and use the experience to empathize with visually impaired people. The game creates awareness about reducing inequalities, one of the UN goals.

The outcomes from E4S’s programs are profound. Quantitative and qualitative appraisals show a reduction of violence, an increase in civic participation, better teamwork and fairer play, and an increase in empathy among participants. And E4S, which Buchbinder started in 2007, now operates in eight nations on three continents and has had an impact on more than 900,000 individuals.

As a person who continues to redefine the value of play—a powerful, universal human language that can teach abstract lessons—Buchbinder has always looked to quantify the economic benefits of games. But she also understands that doing what one believes in is worth the effort even if others think your project is simply “play or fun.” She had this realization during a conversation at HKS with Professor Ricardo Hausmann. “I’ll never forget what he said: ‘The intrinsic value of what you’re doing needs no economic explanation.’ That was so important to hear.”

Other mentors at HKS included University President Larry Bacow MPP/JD 1976, PhD 1978, who at the time was Hauser Leader-in-Residence at the Center for Public Leadership (CPL). “I met Larry at the CPL retreat in the very beginning of my school year, and when I asked him to mentor me, he said, ‘yes, of course,’” she says. “I am so grateful for all that I learned from him.”

Today, Buchbinder is busy expanding her organization, building partnerships, and raising funds to sustain her unique vision. “Problems like corruption, apathy, discrimination, and violence are not exclusive to any one country,” she says. “I believe that these behaviors and attitudes are learned, and that we can unlearn them to be the best version of ourselves.”