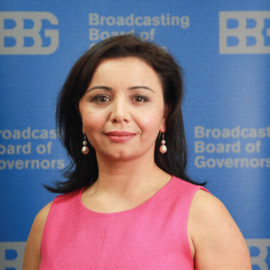 Navbahor Imamova MC/MPA 2017 and Mason Fellow is a native of Uzbekistan, a region where authoritarianism is entrenched, corruption rife, and access to information restricted. Imamova has dedicated her life—first as a reporter for state-controlled media in Uzbekistan and, more recently, as a producer for Voice of America in Washington, DC—to providing unbiased news to a region that was not accustomed to a free press.

After two decades in journalism, Imamova realized she wanted to help find solutions, not just report on problems. “I want to continue to alter the media landscape in Central Asia and, in doing so, change the political landscape of a region badly in need of fundamental reforms in every sector. To do this, I need new knowledge, broader skills, a global network, and a wider intellectual aperture. And that’s where Harvard Kennedy School comes in.”

Imamova, like nearly 60 percent of HKS students, is able to attend HKS because she receives financial aid from the Kennedy School.