The World is Here to Support You

“I GREW UP IN Cape Town in what was classified as a ‘colored’ community,” says Zeenith Ebrahim MC/MPA 2019, a native of South Africa. “The black community was the worst off, then colored communities, then people of Indian or Asian descent, and then white people. That was kind of the order, and that’s how resources like education, health care, and so on were allocated.”

Although apartheid formally ended in the early 1990s, South Africa’s smaller cities and rural areas remain highly segregated. It is there that Ebrahim hopes her early-stage social enterprise, Jamii (Swahili for “community”) will have an impact on populations that have trouble accessing health care. Her solution provides an antidote to the interrelated issues of lack of access to health care and lack of access to jobs.

“The intention is to provide very affordable diagnostics for heart-related illnesses in low-income communities,” says Ebrahim. The company is working on an app-connected medical device that home care workers would use to assess people’s health, including their blood sugar levels, blood pressure, and heart rate. “The second idea is to provide home care, including a tech platform for people who have suffered a stroke or a heart attack and need help,” she says. 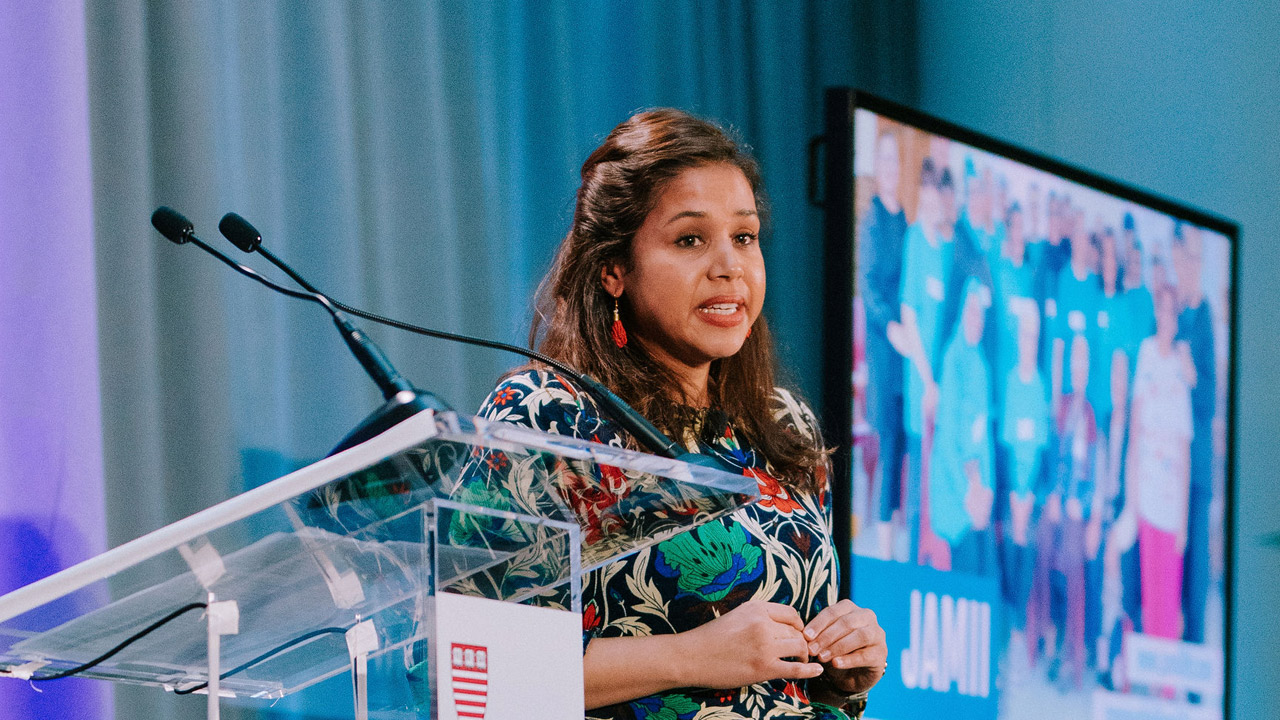 “Having the HKS staff as a support system, kind of cheering you on, and then also the cohort of other Cheng Fellows, was very valuable.”

The project was born during Ebrahim’s year at the Kennedy School, where she was an Adrian Cheng Fellow. But it has much deeper roots. “My grandmother was bedridden for 16 years, and we always struggled to find people who could help us,” Ebrahim says. “We didn’t ever find people who were qualified. So the idea for the company is that we have a medical device, we have an app, we have people that we trained. They can go for half an hour and just do whatever the family needs them to do, from basic diagnostics to bathing.”

She says that people frequently don’t learn they have diabetes or hypertension until something else goes wrong—and often it’s too late. “We want to screen people and try to help them make lifestyle changes early enough,” Ebrahim says. “Of the women we spoke with last year, 60 percent were diabetic, prediabetic, or had hypertension.”

The community of social innovators created by the Cheng Fellowship and the Social Innovation + Change Initiative at HKS was critical to helping Ebrahim transition from her corporate background. “Having the HKS staff as a support system, kind of cheering you on, and then also the cohort of other Cheng Fellows, was very valuable,” she says. “There was never a sense of competition—it always felt collaborative.”

A formal product launch was scheduled for January 2020. Ebrahim remains grateful for her experience at HKS. “It’s amazing: There is a sense that the world is here to support you. I have never been in a resource-rich environment. I don’t mean money. There’s something about being at Harvard that makes you feel like you have access to resources—and I haven’t lost that feeling.”

Going Where the Need Is Greatest