“Their stories deserve to be told”

Mallika Ahluwalia MPA/ID 2011, MBA 2011 is the co-founder, curator, and CEO of the Partition Museum, the world’s first memorial to those affected by the 1947 partition of India. 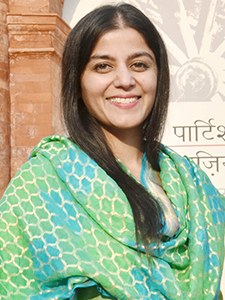 In 2015, Mallika Ahluwalia was working with the Gates Foundation on child and maternal health in New Delhi when she connected with fellow “partition families”—people whose relatives either survived or perished during the 1947 division of the subcontinent into independent India and Pakistan. This partition led to the largest mass migration in human history, with the United Nations High Commissioner for Refugees estimating that over 14 million Hindus, Muslims, and Sikhs were displaced due to violence. Though nobody knows the exact number, estimates of lives lost to the violence range from several hundred thousand to 2 million.

Ahluwalia was troubled that, as India approached the 70th anniversary of its independence, it lacked a memorial or museum to chronicle this cataclysmic event. She and several others from partition families decided to change this by launching the world’s first-ever Partition Museum.

“I thought starting the museum would be something that’d take years,” says Ahluwalia. “What ended up happening was that we did a public event where we announced this idea to set up a museum, and some 1,000 people were packed in a room meant for 300. That’s when we realized this was something that people really wanted, something that really resonated with them.”

So, on top of her job with the Gates Foundation, Ahluwalia began to chart the course for a new—and a new kind—of museum. “This history of partition has been looked at from a macro lens, the nation-state lens, but we wanted to look at the people. It was a very different way of understanding history. A lot of people were affected, and their stories deserve to be told.”

The museum opened in time for the 70th anniversary, just a little less than two years after that first meeting, in the city of Amritsar near today’s border between India and Pakistan. Says Ahluwalia, “It was a crazy period, raising funds, finding volunteers, collecting materials—I curated the entire museum, finding ways we wanted to tell the story.” Since the museum’s opening 28 months ago, it has welcomed 500,000 visitors—proof of the high demand for information on how the partition of India had an impact on the people who endured the chaos and loss.

Some of these visitors were from partition families but had never talked about the tragedy with their relatives. Ahluwalia, who is now the museum’s full-time CEO, says, “Much of this history hasn’t been spoken about. Sons and daughters had no idea their parents went through resettlement. I realized this about my own family.” It was only when her father was talking with her uncle about the museum project that they both learned the partition story of her father’s mother. “I knew my maternal grandparents had been affected by partition, but I never knew my father’s mother had to be hidden in a mail wagon in a train to escape Lahore,” she says. “That is why this museum is so important—to open up these stories before this generation is gone.”

Ahluwalia is glad visitors are moved by their experience at the museum. “I always wanted my life to be about social impact. What’s interesting is that the museum is so different from anything I’ve ever done,” says the former program officer and consultant who has worked everywhere from inner city Chicago to Namibia. “The museum is having a social impact—it is something that needs to exist.”