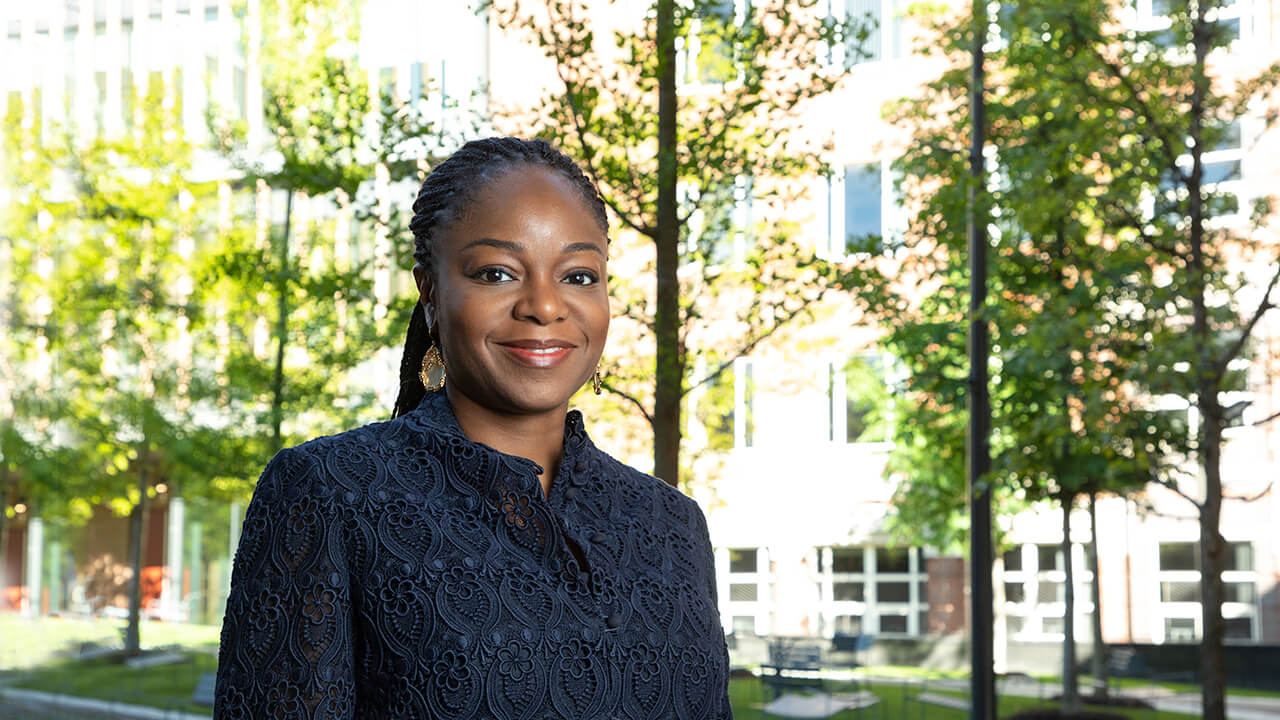 CINA LAWSON MPP 2001 FIRST MET the president of Togo when he visited New York for the United Nations General Assembly in 2009. She was working in Manhattan, developing data infrastructure services for Orange Business Services’ public- and private-sector clients, and the two discussed the challenges and opportunities facing the telecom sector in West Africa.

When President Faure Gnassingbé was reelected in 2010, he remembered their conversation and asked Lawson to join his government as the minister of posts, digital economy, and technological innovation. Since assuming that position, she has significantly expanded access to both the internet and financial services in Togo.

For instance, the percentage of people in Togo who have mobile internet access has grown from 3 percent in 2012 to 49 percent in 2018, while the number of people who have internet service has grown tenfold since 2013. On financial inclusion, Lawson led two projects—Eco CCP (an interest-bearing mobile savings account that allows anyone with a mobile phone to open a bank account in seconds) and AgriPME (an electronic wallet for farmers that has revolutionized the disbursement of government subsidies to the most vulnerable Togolese farmers, making it possible for them to receive funds directly in their e-wallets to purchase fertilizer). “With AgriPME, we are ensuring that the fund is effectively managed and that the subsidies reach their beneficiaries securely and quickly,” says Lawson.

In a sense, Lawson had been preparing for this job her whole life. She grew up in Paris as the daughter of Togolese immigrants who had fled their homeland. “Because my dad was an opponent of the regime and we were exiles, we had lots of discussions about politics. But for me, it was about policy not politics—how do you do something to contribute to the public good?” she says.

She was studying at Institut d’etudes politiques de Paris/Sciences Po when one of her professors suggested that she continue her education at Harvard Kennedy School. Thanks to a scholarship from the Harvard Club of France, she was able to attend. “I loved the MPP program,” says Lawson.

She says that she valued her HKS education while she was in Cambridge, but that it was only later, as she was working in telecom, that she connected the dots. “My time at the Kennedy School was fundamental. It prepared me for the position I have today, but I had no idea of this at the time,” she says.

“Now I have a deeper understanding of leadership. It’s not about forcing people; it’s about inviting them to understand your vision and connecting with them on a level where it’s their fight too.”

As minister, Lawson implements what she learned about leadership, teamwork, and motivating others. “I cannot be doing everything on my own,” she says. “I need to convince people to believe in what I do and to be willing to put in the effort and fight even better than I could for a shared vision. Now I have a deeper understanding of leadership. It’s not about forcing people; it’s about inviting them to understand your vision and connecting with them on a level where it’s their fight too. It’s not success for you as an individual. So I understand better, 20 years later, the importance of what I was taught at the Kennedy School.”

She also recognizes the significance of her Kennedy School alumni network: “I was on a trip for Togo in Japan, and I wanted to meet some Japanese leaders, so an HKS alumna organized everything for me. I know I can rely on this—people are very helpful with their contacts and advice. The alumni network is formidable.”

Lawson is also aware that she is a role model. “For Africans, it is very important to have other Africans as Harvard alumni—it inspires people, and tells them that they too can achieve this,” she says. As one of just a few students from Togo in the history of Harvard Kennedy School, Lawson is a shining example for other leaders everywhere.

A dream realized: Kader Kaneye MC/MPA 2017 was frustrated with graduate education in Niger, so he created a new university