Combatting Substance Use Disorders and the Ecosystem that Nourishes Them: Sarmed Rashid MPA 2017 | Harvard Kennedy School
Skip to main content

Combatting Substance Use Disorders and the Ecosystem that Nourishes Them: Sarmed Rashid MPA 2017 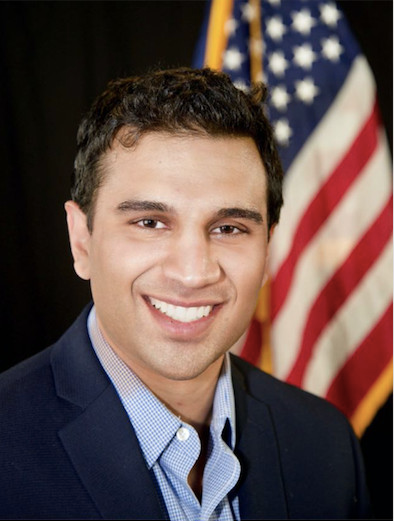 In the summer of 2018, Sarmed Rashid MPA 2017 had just started volunteering as an emergency medical technician with his local fire department when his first call came in: someone had overdosed. He rushed to the person’s home, and, on entering, was overwhelmed by the stench and debris. Of the victim, says Rashid, “She was unresponsive, and I don’t know if she survived. It was truly awful.”

That he joined the White House’s Office of National Drug Control Policy (ONDCP) just a few months later was a coincidence not lost on him. Rashid decided to work for the ONDCP because he felt “the opioid epidemic was symptomatic of a lot of what’s going on in this country, such as disparities in health care access, large macroeconomic trends regarding the loss of manufacturing jobs, and social isolation,” he says. So when he was offered a Presidential Management Fellowship (PMF) at ONDCP, he jumped at the chance.

An ecosystem of problems

He had already been serving as a PMF at the U.S. Small Business Administration, where he worked for over a year. In this position, he talked to many small business owners who were struggling to find employees who did not have a substance use disorder. This is when he started to become more interested in the opioid and addiction crisis.

“The problems we’re dealing with—how to get people into treatment, supporting people into recovery, and preventing drug use—have technical solutions,” he says. “But there’s another layer: the ecosystem that gave rise to all this.” Rashid is particularly interested in the idea of wellbeing, which, he says, incorporates issues of physical and social health. “Obviously, it’s one thing to work on the technical challenges, but for me it’s about looking at the ecosystem to figure out why it is something we see in our society compared with others.”

From Pakistan to Texas

Rashid grew up in Texas, which is about as far away from his parents’ native Pakistan as one can get. He was especially close to his grandmother, who “managed to raise two kids of her own while developing a career in Pakistan,” starting as a midwife then moving to work for the UN and international NGOs on neonatal and maternal health programs. “She was instrumental to my upbringing,” he says of the woman who instilled in him a deep desire to serve the public—plus the ability to read and speak Urdu.

Rashid’s parents are both doctors, and Rashid had planned to follow their example and attend medical school. But after 9/11, like many others, he started thinking and talking more about social issues and, he says, he became more interested in transforming the system than serving as a doctor.

After college at the University of Texas at Austin, where he majored in government and mathematics, he worked for four years in international development. “I was a USAID contractor in destabilized places, using development money that came in to help with community-building programs in countries in transition, such as in Afghanistan, Libya, and Myanmar. A lot of this involved building links between the government and civil society and trying to figure out how the two could work together.”

An even larger impact

Wanting to gain skills to have an even larger impact, Rashid matriculated at the Kennedy School as a dual MBA/MPA student, receiving his MBA from Wharton in 2016 and his MPA at HKS in 2017. He says he loved his class with Robert Putnam, Peter and Isabel Malkin Professor of Public Policy Emeritus, and that the idea of social capital plays a big role in his work today. “We’ve seen places where unemployment is high, there’s a rise in loneliness, a decrease in institutions like marriage—it’s no surprise there’d be an opioid problem. I was lucky to take Robert Putnam’s final graduate seminar on how social capital affects a range of public policy outcomes. I’ve come to see that this epidemic cannot be separated from other conversations about worrying trends in mental health rates, Americans’ feelings of loneliness, and the decline of institutions that would provide a feeling of human connection.”

In his current role on the public health team of ONDCP, he was selected to lead the coordination of 33 agencies’ public health efforts in support of drug prevention, drug treatment, and recovery from addiction. He is also creating the agency’s strategy to address the unique needs of urban populations and people of color.

“I’m like an in-house strategy consultant and project leader,” he says. “I helped conduct the analysis that led to the development of the plan to help people get treatment. But we didn’t want the government to create a plan that sits on a website,” he says. “So now I am working with almost every agency in some capacity or another to implement the plan.”

He points out that combatting opioids is one of just a few issues that claim strong bipartisan support. Says Rashid, “Addiction is prevalent everywhere—people in many families, including mine, have dealt with it. Our approach is to enhance public health services. We are trying to use the criminal justice system to help people into recovery. This is a whole-of-government approach to end the addiction crisis we face in America.”

We are trying to use the criminal justice system to help people into recovery. This is a whole-of-government approach to end the addiction crisis we face in America.

Today, Rashid is dealing with the impact of COVID-19 on people with substance use disorder. “A lot of what we’re rushing to do is to see how to continue to deliver treatment and recovery services despite the new situation. People still need to get treatment for their substance use disorders. People often need ongoing recovery support—these are lifelong problems, and what if people can no longer access support? How do you effectively deliver these services remotely?” he says, listing just some of the problems on his mind. He is also concerned with the many individuals in the prison system or who are homeless and struggling with addiction. “These populations are at high risk of being exposed to COVID.”

Rashid continues to volunteer with his local fire department during the COVID-19 public health emergency, where he still observes the impact of the addiction crisis on America. But he is cautiously optimistic. “It was amazing seeing that overdose deaths decreased by 4 percent in 2018. This was the first time that overdose deaths have decreased in nearly 30 years,” he says, though he notes that deaths increased in Latinx and African American populations.

“Whether it’s my family, my classmates at the Kennedy School, or my colleagues, I’ve always been surrounded by people motivated by public service.” Rashid says. “In that way, I’ve been very lucky.”