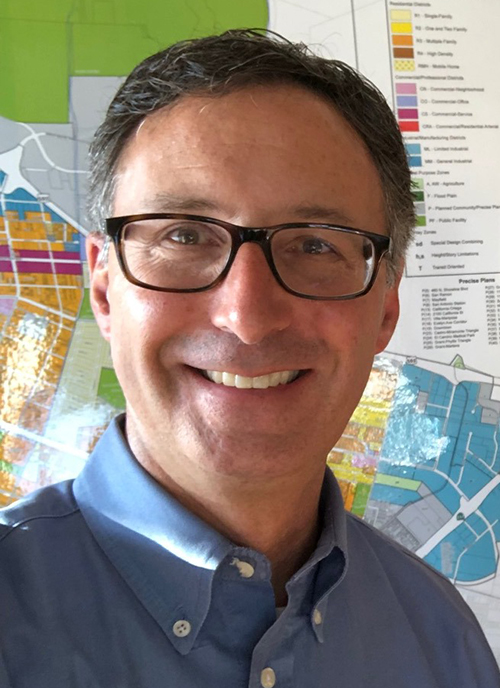 After five years working on Capitol Hill, Dan Rich MPP 1992 took stock of his career, set a course for Harvard Kennedy School, and discovered a career that he loves: city manager for Mountain View, California. Since 2011, this former congressional aide has helped lead the city of 80,000 that is perhaps best known as the home of technology companies such as Google, LinkedIn, and Intuit. He just announced his retirement after 27 years in local government.

“I didn’t go to Harvard Kennedy School to be a city manager,” says Rich. “I didn’t even know what a city manager was then. I left DC because I was very frustrated by what I deemed to be a lack of management skills in politics. I wanted to marry politics and management.”

Unsure of what that marriage would look like, Rich attended the Kennedy School with the knowledge that he loved the political environment of our nation’s capital, but he preferred to work behind the scenes.

“The Kennedy School helped define me,” he says. “Taking courses in finance and human resources gave me a foundation in areas I didn’t have skills in. The case method encouraged critical analysis, and the ability to see things from both sides of the issue. We were required to think on our feet and answer under pressure, and this was absolutely helpful. It gave me more self-confidence.”

Whether he’s working on the high cost of housing in Mountain View or dealing with the transportation issues that come from a growing population, Rich says that he enjoys helping others find a middle ground. It’s something he realized about himself during a negotiation class at the Kennedy School. “What I learned about myself is that I’m not as good at the one-on-one, win-lose negotiations, but I was very good at helping a larger group reach consensus. It was great to understand that I like to find a fair and equitable middle ground.”

He says that as a city manager, he works as both an administrator and influencer of policies. “The classic public administration textbook says councilmembers are policymakers who stay out of administration, and managers are administrators who stay out of policy, but in reality, it’s a lot more grey than that. Whether I admit it or not, I influence policy through the recommendations I make and the conversations I have. But no matter whether my recommendation is followed or not, as long as their policies are legal and ethical, I have an obligation to implement them.”

He has no doubts that he works in a very political world, but, as he puts it, “By my code of ethics, I am nonpartisan and nonpolitical. I help shape policy and I help elected officials be successful—but first and foremost, I’m a manager. I will go to my grave saying that being a city manager is harder than being a CEO of any company other than maybe a conglomerate. A city really is a conglomerate. Most companies have a core mission and core product, not only regarding the bottom line but whatever their product or service is. In a city, I’ve got police, fire, library, parks, public works, planning, and recreation—all areas with entirely different motivations and drivers. My job is to be the conductor of the orchestra and have these disparate parts work together to move the organization and community forward.”

The HKS Alumni Network: A Bridge from Graduate School to New Careers

When Cate Fox-Lent MC/MPA 2019 wanted insight into careers in the nonprofit world, she turned to Harvard Kennedy School’s alumni network.

Alumni host students for one day during the January term at their workplaces in different locations around the world.

Develop new friendships, learn something new and share your expertise while strengthening the HKS alumni community.