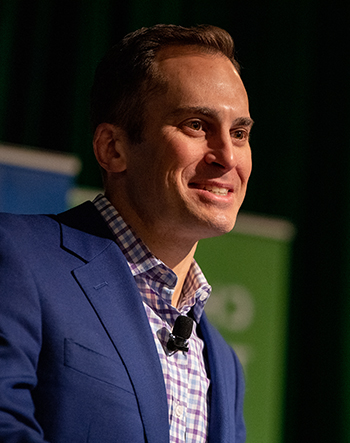 Jeff Marrazzo MPA 2009 likes to approach big, societal problems from multiple angles. This belief—that the public, private and nonprofit sectors can and should be leveraged to have a positive impact on people’s lives—is one reason he studied health care and then pursued a career in the industry.

Today, he is the CEO of Spark Therapeutics, an enterprise he cofounded based on research from The Children’s Hospital of Philadelphia that has grown to employ 600-plus people. Spark focuses on discovering, developing, and delivering gene therapies to treat rare genetic disorders; its drug Luxturna®, which combats an inherited blinding disorder, was the first gene therapy approved by the U.S. Food and Drug Administration to treat a genetic disease. The company has sent more than 250 vials of the gene therapy to 10 specialized treatment centers in the United States, where they are delivered via a specialized surgical procedure. Marrazzo and his team have heard that patients who would likely progress to complete blindness have experienced significant improvement in their vision after receiving the therapy.

Marrazzo didn’t set out to become CEO of a biotech company. He was always interested in health—at age 15 he worked in a cancer research laboratory and during college he considered attending medical school—but he chose instead to undertake a dual major in economics and systems science and engineering at the University of Pennsylvania. After college, he worked in the private and public sectors, including as a political appointee in the administration of Pennsylvania Governor Edward Rendell—a job that would later shape his desire to attend Harvard Kennedy School.

“As a member of Governor Rendell’s staff, I was focusing on health care policy legislation, regulation, and implementation questions; I also had responsibility for emergency management and gaming issues, so I had this wide range of topics I had to be conversant in each and every day,” he says. “But the one issue I was most excited and passionate about was health care policy.”

Wanting to learn more, he was accepted into the MPA program at the Kennedy School, where he examined health care’s public and nonprofit aspects, as well as the MBA program in health care management at Wharton. Before he matriculated as a concurrent-degree student, though, he recalls a particularly inspirational discussion he had with Governor Rendell in 2005. “He said that over the next 50 years, the United States would face three crises: health care, education, and energy. In all three, there’s an explicit and substantial role for the private, nonprofit, and public sectors. If you devoted your professional career to any one of these, first, you would never be bored, and second and most important, you could leave a lasting mark on the nation and humankind.”

Marrazzo liked that health care was one of the few industries where “being facile enough to crisscross those three different sectors not only is really important but also can have a lasting impact on people,” as he puts it—and he dived into graduate school to explore every corner of the United States’s $2.7 trillion health care industry. As he approached graduation and began to look for jobs, he notes that he was not focused on a sector or technology—he considered multiple opportunities in government—but instead, he says, “I wanted to find the corner of the health care industry where I could be most disruptive and have the most impact on patients and ultimately human health.”

After graduation, he joined a startup called Generation Health that was attempting to bring genetic testing to everyday clinical practice by making its use more accessible and affordable to patients and physicians. Marrazzo found his way to the startup through an HKS course on social entrepreneurship in which he and other students wrote a business plan about the application of new genetic testing technologies in the criminal justice system. After reviewing the business plan, one of the two professors of the course, who financed and sat on the board of Generation Health, invited him to explore various potential applications of genetic testing, including in the health care industry. Generation Health was eventually sold, and from there, Marrazzo started Spark with the goal of using DNA to fix the root causes of diseases as opposed to simply treating symptoms.

“Both companies are about new technologies that were stimulating complex policy questions that, if the science, medical, and policy questions could be all solved, could unlock a period of real change in the human condition and human health,” he says. “For example, in the case of Spark, how society pays for a potential one-time, curative medicine was uncharted territory, and without some of the policy innovations that my team at Spark has worked hard to introduce over the past decade, I don’t believe the field of genetic medicine would be as far along, despite the remarkable scientific progress.”

While at the Kennedy School, he took inspiration from his classmates, citing one course in particular, “Writing for Policy and Politics.” He says, “Every class, we had to write a speech or policy brief, and one of the things I so appreciated was that I wasn’t anywhere nearly as naturally gifted as many of my classmates, so I learned a lot from them, many of whom went on to be advisors and speech writers to elected officials.

He says his classmates and this class upped his game. “I use those skills—of being able to distill and communicate complex issues down to a few salient points—nearly every day, whether I am speaking to a patient and their family, a scientist or physician, or a policymaker, or investors. In every case, I need to understand an issue well enough to be able to communicate it clearly and succinctly to different stakeholders with differing levels of understanding of a topic. The Kennedy School and my classmates helped me perfect this critical skill to advance my ultimate objective of making change happen in medicine for the benefit of patients.”

Marrazzo greatly enjoys passing his knowledge along to others. “I am in the midst of my own personal journey to find ways to amplify my impact on the world,” he says. “Recognizing that I have only a limited amount of time in a given day, one way for me to have an impact is to be an effective coach, mentor, and developer of other people who can go on and create positive change.”

He works not just with his employees but also with individuals from outside his company. “I gain a lot of motivation from seeing people step into the things I used to do, and to watching them be even more successful and put their own imprint on the world,” he says. Because he believes that diversity strengthens efforts to improve the human condition, he prioritizes saying “yes” to opportunities to coach people who do not look like him. “I’m a firm believer that the creative process—which science is—requires diversity of thought. I want to have an impact on the diversity and inclusiveness of our organization and the industry of startup technology companies,” he says.

Marrazzo is just one of the many alumni using skills they learned at HKS to improve people’s lives—in his case, by transforming health and by leading an ethical company where diversity, inclusion, and belonging are part of its DNA—“both literally and figuratively” notes Marrazzo, given Spark’s use of DNA to improve health. “It’s about the multiplication of impact,” he says—words that ring true for HKS alumni around the world.