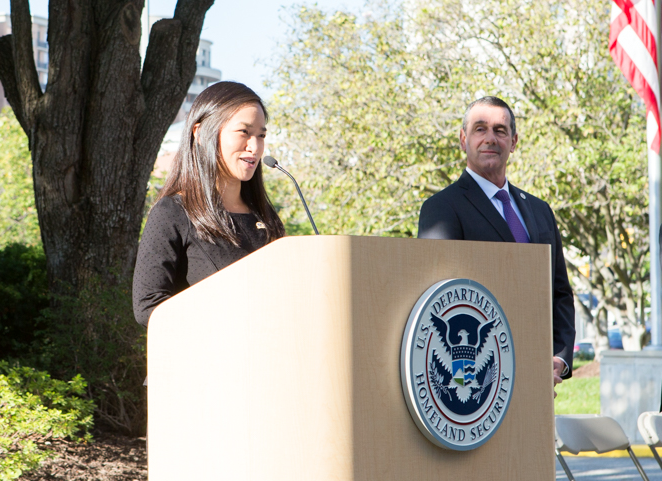 “Take off your shoes. Remove your laptops from your bags. No bottled water.”

These instructions, given by screeners from the Transportation Security Administration (TSA), are familiar to anyone who flies in the United States—and they are often passengers’ only interactions with the TSA. But for one alumna of the Kennedy School, the TSA’s role is much deeper.

Ha Nguyen McNeill MPP 2006 is the chief of staff for the TSA. She describes a far-reaching organization that is continually evolving. “The face of TSA are the folks in uniform at the airport checkpoints, but the agency does so much more for all transportation nodes. We are international, we have an intelligence arm, we do policymaking, we look at emerging threats, and we have a lot of innovation on the tech front. The threat is evolving very quickly, and we need to stay ahead of that.”

McNeill has almost a decade of service in the U.S. federal government. Her focus has always been on security—of trade, people, intellectual property, and transportation—all of which have benefited from her dedication to this core governmental function. “For me, the intriguing thing is that you’re delivering security that affects people’s day-to-day lives, which comes with a lot of complexities and nuances,” she says.

McNeill asks, “How do you secure the homeland and, at the same time, secure people’s way of life?” The flow of goods into the United States was an initial focus of these efforts. “Early on, my work with the department focused on cargo and trade security. How do we keep trade flows open but integrate security?” she says. “There’s lots of interest in how we incorporate new security technologies into the supply chain and commerce flows.”

At the Kennedy School, McNeill gained management and analytical skills that she uses daily. She points specifically to her class in ethics. “How to resolve difficult ethical and human questions in the workplace comes up all the time,” she says. “It’s important to enable difficult conversations upfront, but to ensure that people move forward as a team.”

She says HKS prepared her to work collaboratively. “HKS set up critical framework around which projects are team-based, and you have to be able to rely on teammates and develop work plans that use people’s varied skills. I cannot say enough about this.”

McNeill engages multiple stakeholders, including people in public affairs, legislative affairs, the White House, and industry, to achieve the mission of TSA, a behemoth comprising 60,000 employees. “It’s a whole-government effort,” she says. “It’s important to be transparent and cultivate relationships and channels of communications early and frequently. It’s about being an honest broker while understanding that the security-focused mission is our top priority.”

This mission remained a top priority, even during the federal government’s longest partial shutdown, which took place December 22, 2018, to January 25, 2019. “We didn’t have funding for five weeks, and the vast majority of screeners continued to report to work and most airports ran very well. Their commitment to the mission should not be forgotten. I could not have been prouder to be a part of this agency.”

Applying what she learned at the Kennedy School to her passion of national security makes the TSA a perfect fit. With McNeill in a leadership role, it is certain that the TSA will be on the forefront of any risks that develop.