A seat at the table for all Iraqis: Ambassador Matthew Tueller MPP 1984 | Harvard Kennedy School
Skip to main content 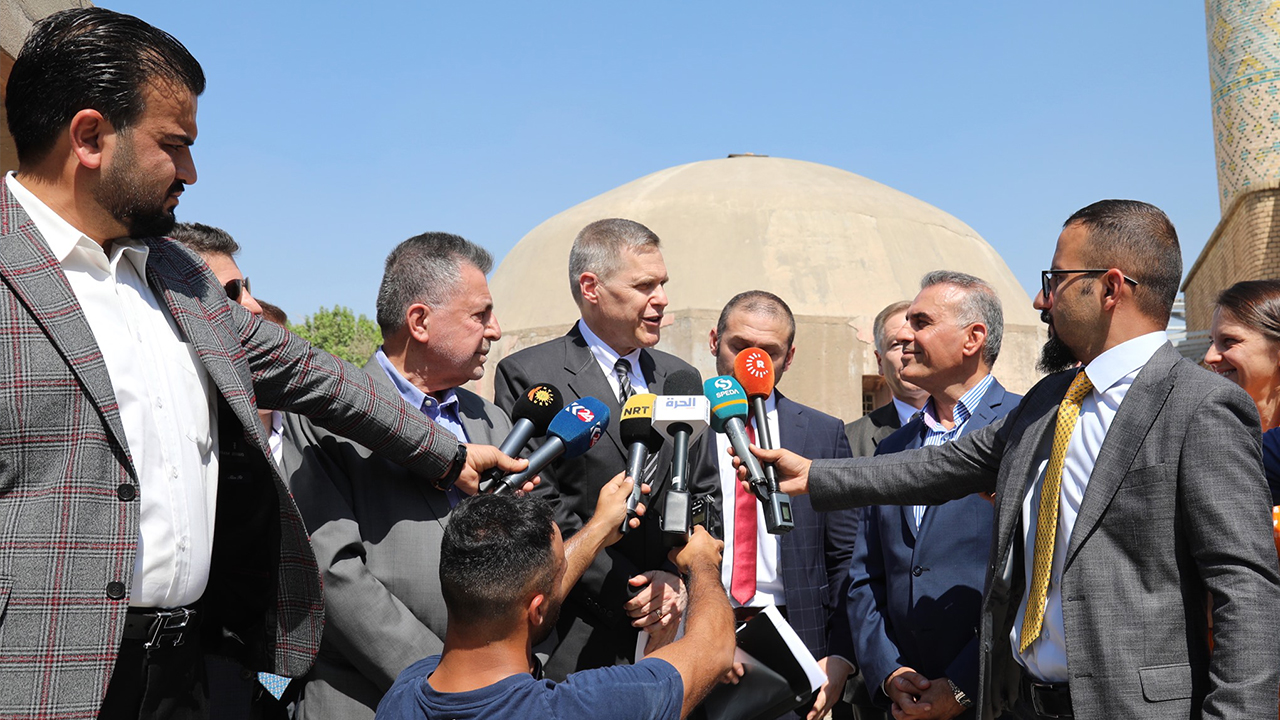 A seat at the table for all Iraqis: Ambassador Matthew Tueller MPP 1984

A veteran diplomat, with senior postings across the Middle East, Tueller has been leading America’s diplomatic efforts in Iraq since 2019

Tueller should know. Since June of 2019, he has been the U.S. ambassador to Iraq, a country with long-standing ethnic and religious strife in a region shaped by America’s presence.

“I focus on engaging with senior government officials, political leaders, civil society leaders, and others to try to understand what’s motivating positions that they’re taking, and to make clear the ways in which the United States can lean into particular positions,” he says.

This work is urgent. “Imagine a case where Iraq falls into the same sort of failed-state status of Syria,” he says. “In Syria, we saw the impact of large numbers of displaced people, which had impact on the security of our partners in Europe. Iraq has many of the same fissures, and we could see the same outcome.”

Tueller always knew he wanted to join the foreign service. He is a “third culture kid,” a term coined in the 1950s to describe the children of American citizens who work abroad. Tueller’s father was a foreign service officer whose postings meant that Tueller grew up in Latin America, Europe, and North Africa. “We were integrated into the communities, the culture, and the economy, looking from outside of a culture to see how it ticks. It’s an incredibly important part of making yourself fluent in how to operate within that culture,” he says.

He also recognized the value of his father’s work. “I saw what my father did and had a sense that representing the United States abroad was a meaningful way to spend my life,” he says. Living in Tangier as a pre-teen, he had the opportunity to learn colloquial Arabic, a skill he enhanced during an intensive program in Cairo before joining the MPP class of 1984 in Cambridge.

He was drawn to HKS by the School’s case study method. “It was very well suited to what I wanted to do in the foreign service, and the kind of skills I would need,” he says. “I also knew that the MPP program had a very strong quantitative element, focused on economics and systems.”

Serving as the U.S. ambassador to Iraq is not his first time leading diplomatic efforts in a Middle Eastern nation. He became an ambassador in 2011, to Kuwait; in 2014, he became ambassador to Yemen and, five years later, was confirmed by the Senate to his current position. It is, however, his most unusual posting. “Iraq is not a normal embassy,” he says. “It’s quite large in some senses, because of particular challenges we face operating in an environment with security threats.”

“I saw what my father did and had a sense that representing the United States abroad was a meaningful way to spend my life.”

Those security threats mean that his wife of 41 years, DeNeece, did not join him in Baghdad. “There is a reason for the foreign service to have families at posts,” Tueller says. “We are representing the United States. We’re not off living in a military base. We integrate ourselves into the community, into the culture, the economy; our children attend local schools; we have local friends and neighbors. It is an incredibly important part of making yourself fluent in how to operate within that culture. Baghdad is different.”

“I have to give credit to my wife and five children,” he says. “I don’t know how I would do it without the ability to maintain regular communication. My wife and I do have a video conversation every evening. Many of the grandkids know me as the face on the screen—they’re delighted when they get to see me face-to-face.”

Despite the sacrifices, Tueller is committed to helping Iraq emerge from its sectarian strife.

The United States’ major strategic interest in Iraq is preventing a resurgence of the Islamic State—the violent group that prospered most when a sectarian Iraqi government marginalized Sunni Arabs, Tueller says. Also vital are fostering a military engagement that strengthens governance and helping the country move toward a place where all Iraqis feel they have a seat at the table. “Iraq is very much in a state of trying to define itself,” Tueller says, pointing to the fact that many Iraqis feel a tribal identity more strongly than a national identity. “It’s a country that is riven by ethnic and sectarian differences. Many Iraqis wouldn’t be able to answer the question of how to be an Iraqi.

“If Iraq can actually find a way, through participation in a constitutional rule-of-law democratic process, to give all Iraqis the sense that they have a state, this would have a beneficial impact over the next generation among all the countries in the Middle East that still struggle with finding ways to establish a basis for the legitimacy of government,” Tueller says. “We have the opportunity to help Iraq have this kind of outcome. It’s not going to happen quickly, but this would serve the United States’ long-term interest of seeing a region where states respect each other’s borders and, within their borders, govern on the basis of popular participation for all, and not differentiating citizens based on arbitrary identities.”

While sometimes more extreme, Iraq is not alone in facing daunting issues such as polarization, violence, and a splintered sense of national identity. These are hard issues that will require the best thinking the United States has to offer, which leads Tueller to reflect on the evolution of the foreign service.

“Right now there’s a lot of discussion on reform, to bring the foreign service into the 21st century,” Tueller says. “But since I entered the foreign service, 35 years ago, I don’t think there’s ever been a time when the service hasn’t been examining itself—are we bringing in the people with the right skills and giving them a chance to develop skills? The world is changing. I think we’re trying to find out how to deal with issues in 2021 with basic skills that have been around for a long time. Diplomacy relies on cultural sensitivity, listening, communications skills—these are basic skills many of us learn in kindergarten. The question is, how do you apply them to complex issues?” This is why diplomats exist: to solve difficult problems.

Banner image courtesy of Matthew Tueller MC/MPA 1984, center, who has been U.S. ambassador to Iraq since 2019.