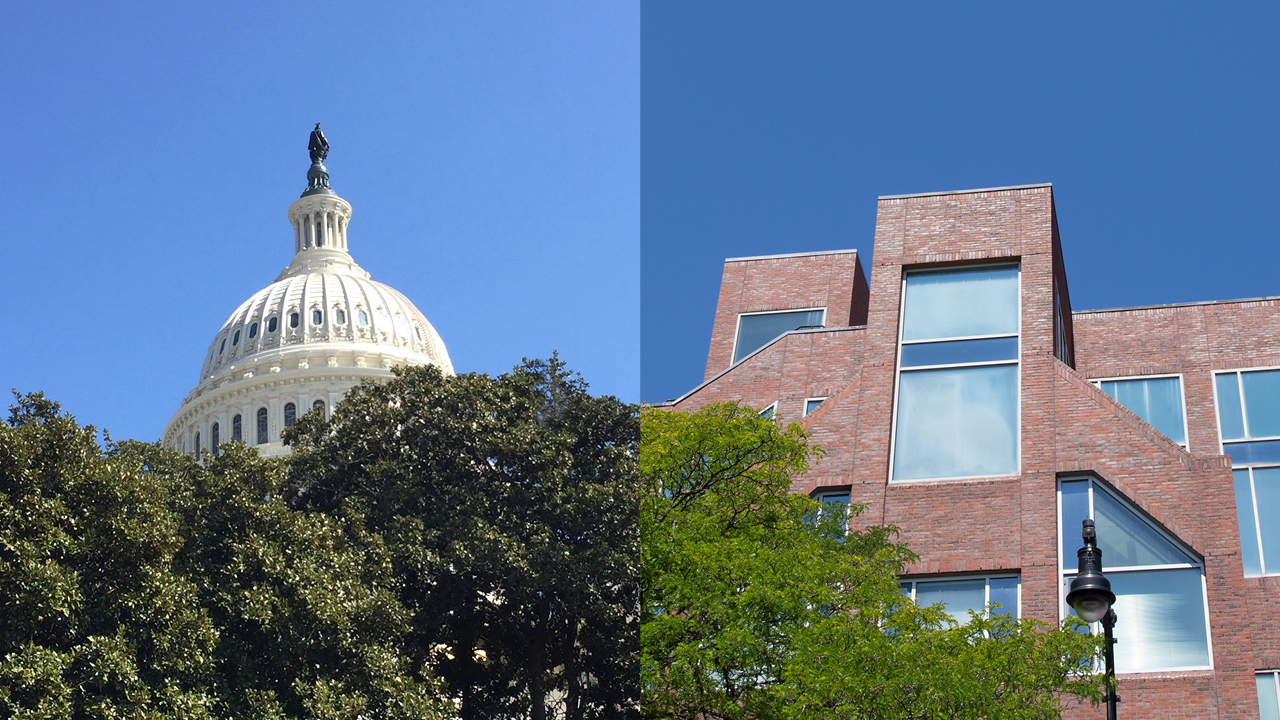 THE ENVIRONMENTAL SCIENTIST John Holdren was no stranger to the world of Washington when, in 2008, he was appointed senior science advisor to President-elect Barack Obama. For more than four decades, during his posts at UC/Berkeley and then at the Kennedy School, where he has taught for almost 15 years, Holdren advised all three branches of government up to and including the president on energy and technology matters. Yet looking back on the past eight years from his office at the Kennedy School, where he returned this past spring, Holdren can see that his time in Washington broadened his perspective on the myriad issues surrounding science and technology policy. It’s a perspective he believes will help inform his research and teaching.

Holdren is among a cadre of Kennedy School faculty members who through the years have had the chance to leave academia, put teaching and research aside, and experience Washington from the inside looking out. For example, Roger Porter served as director of the Domestic Policy Council in the George H.W. Bush administration; Joseph Nye was assistant secretary of defense in the Clinton administration; and Meghan O’Sullivan was appointed deputy national security advisor for Iraq and Afghanistan in the George W. Bush administration. These faculty members, and the more recent returnees discussed in this article, are part of a long-standing tradition the Kennedy School deeply values and encourages.

Kennedy School Dean Doug Elmendorf, who served as director of the U.S. Congressional Budget Office from 2009 to 2015, understands firsthand the importance of effective governance and the role of the Kennedy School in helping achieve it. “When Kennedy School faculty members serve in government, they bring their insights directly to elected officials, and later they bring new perspectives back to their teaching and research in Cambridge.”

Time spent in Washington was important to Ash Carter, deputy secretary of defense from 2011 to 2013 and secretary of defense from 2013 to 2015, in how he might structure his future teaching. “Having been in the world of practice helps to steer students toward the problems of consequence that are going to determine their futures and also prepare them to be leaders in public life,” says Carter. “My experience in the world of practice gives me the ability to convey to them the tradecraft of bringing the world of thought and the world of action together.” He recently returned to the Kennedy School to direct the Belfer Center for Science and International Affairs.

Samantha Power, a professor of practice at the Kennedy School before leaving for Washington to serve on the National Security Council from 2008 to 2013 and as U.S. ambassador to the United Nations from 2013 to 2017, believes she will emphasize an aspect of government service she didn’t fully appreciate before going to Washington.

“When I return to the classroom,” says Power, who has a joint appointment with Harvard’s Kennedy and Law Schools, “I plan to situate any work oriented toward policy makers with an understanding of all they are juggling at one time. When I was at the United Nations, I would go from a national security meeting with the President by videoconference on ISIL to a security council session on South Sudan to a meeting with my team on what sanctions we needed to impose on North Korea that might someday affect the calculus of the regime to a meeting in my office with Shirin Ebadi, the Iranian Nobel prize winning human rights laureate. The list goes on and on and on. Managing bandwidth constraints and delegating properly are key.”

For Holdren, his Washington experience expanded his understanding of the challenges in science and technology facing countries around the world—a perspective he intends to share with students and postdocs going forward. As director of the Office of Science and Technology Policy, Holdren presided over implementation of the six bilateral ministerial-level science and technology cooperation agreements the United States has forged with Brazil, China, India, Japan, Korea, and Russia. He also met regularly with chief science advisors to the governments of the G8 plus 5 and with the science ministers of the Organisation for Economic Co-operation and Development and the G20.

Public policy professor Jeffrey Liebman, who served during the early years of the Obama administration as executive associate director and chief economist and later as acting deputy director, believes that his time in Washington, where he was consistently swept up in the major issues of the day, prompted him to change his macroeconomic course lectures to better reflect current events. He also sharpened his professional skills, learning how to write more-effective memos and briefings that conveyed the pluses and minuses of an issue to policymakers. “Early in my career, when I was asked to teach these kinds of skills, I didn’t know what I was doing, but later, after Washington, I did,” he says.

For many who have served in Washington the experience changes not only how they teach but also their research focus. “I came back with a complete refocus on my research,” Liebman says. “I wanted to look at how one can help government agencies be more effective.” Upon his return, Liebman started the Government Performance Lab, which focuses on the question of what techniques work best for improving government.

After 35 years working in national security affairs, Carter looks forward to turning his attention to new issues. “I wanted to continue to contribute to the public life and to the greater good outside defense, but not to the exclusion of defense,” he says. “A tsunami of change is coming, brought by technology, but those of us at work in the technology community need to work on all the consequences and opportunities and responsibilities that come with change.” One issue he plans to focus on in his post-defense role is ensuring that the innovative system continues to work for a broader public purpose, and to the benefit of all our citizens, because, he says, “that’s the only way we’re going to have a cohesive society.” One innovation challenge he points to is how to use the vast human talent that will not be driving cars or in retail.

The recent work in Washington done by Jason Furman, professor of the practice of economic policy, will significantly shape the research he plans to conduct. Furman, who served as chair of the White House Council of Economic Advisors from 2013 to 2017, will focus on issues that are on the minds of people both in Washington and throughout the country: the decline of participation in the workforce by prime-age men, household income and the relationship between growth and inequality, and fiscal reform. The collaborative setting the Kennedy School provides, he says, will be critical to this work. “A lot of public policy is done collaboratively,” Furman says, “so to work with my colleagues on issues they specialize in like climate change or health policy is really exciting to me.”

Time in government gave these faculty members new perspectives on teaching and research interests. It also gave them added appreciation for the impact and influence of the Kennedy School.

On issues ranging from nuclear security to climate change to science and technology, Carter says, his Pentagon experience benefited greatly from the research coming out of the school. Over at the National Security Council and then at the United Nations, Power saw broad concepts such as Joseph Nye’s soft power guide administration thinking, while granular work on Iran’s nuclear program had great influence during the negotiation of the nuclear deal.

The seeming omnipresence of HKS graduates was perhaps most striking. “I had a bet with my staff that when we got off an airplane or a helicopter anywhere in the world—a war zone, an American base, or a foreign capital—one of my students would be there somewhere,” Carter says. “And there always was, and I always won the bet.”

At a U.S. base in a remote corner of Afghanistan, the senior military officer welcoming Carter during a visit was a former student. When the officer asked Carter if he would speak to a journalist from the Economist who was also there, Carter agreed, only to learn that the journalist had also been one of his students. It fell to him to introduce the two fellow alumni. “If I went into a ministry of defense or foreign affairs or the headquarters of a foreign leader, invariably there were Kennedy School graduates there,” he says.

“My experience in the world of practice gives me the ability to convey to [students] the tradecraft of bringing the world of thought and the world of action together.”

“By the end of my time in government I felt like I had assembled quite literally a dream team: the best operational people to do scheduling, advance and logistics; the best specialists who knew the history, the culture, the language of the Middle East generally and of Syria specifically; the best Congressional liaison, the best of everything,” Power says. “There’s no coincidence that I had on my team Kennedy School veterans. My closest advisor was a former student of mine, Nik Steinberg MPP 2008.  Everywhere you looked, there were Kennedy School alums,” she says. “They were people who came up and said, ‘I was at the Kennedy School while you were there. I took Graham Allison and Bob Blackwell’s class. They interested me for the first time in foreign policy.’”

Kennedy School faculty members are accustomed to having the ears of leaders and decision-makers, regardless of party affiliation or what administration they served in. And that’s especially true for those whose resumes include time spent at the highest levels of government. There’s a concern that, given what sometimes appears to be a chasm between the current administration and the academy, this may have changed.

“The challenge of nonpartisanship, of course, is that the new administration has given us a lot to criticize in terms of their stance on science and technology and its role in government,” says Holdren, who was deeply critical, for example, of President Trump’s decision to pull the United States out of the Paris Climate Accord. “I don’t think the issue in this administration is choosing between Republican and Democratic positions. It’s choosing between good government and bad government.”

Furman says that a yawning partisan divide among policy experts is exaggerated. He already sees important conversations going on across the country, with participation by experts from across the political spectrum. “The solution to not enough data and analysis is more data and analysis,” he says. “On a lot of things there’s a great dialogue already that’s based on facts and analysis.”

Power believes that a partisan or unilateral approach, while initially appealing, may be fool’s gold, and different voices will eventually be sought out. “What I would expect is that you’ll start to see approaches, policies, staffing decisions tack more to the mainstream to more of the traditional approaches, and in the meantime, Kennedy school students and professors and researchers will be doing their work, and that work will be available to those at the highest levels of government when they really want to get things done that work for America and work for global peace and security.”