Cambridge, MA—Four Harvard Kennedy School graduates will be honored during Reunion Weekend May 21 for their exceptional contributions to the HKS community and to the world. The school’s Alumni Board of Directors will present the awards at a ceremony on campus.

The HKS Fund’s Executive Council will also present Mary V. Kurkjian MPP 1978 with the HKS Fund Outstanding Alumni Award for her support of the Kennedy School for more than two decades. 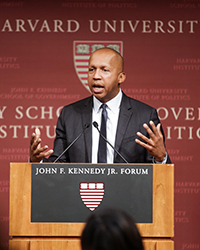 As a human rights lawyer, professor, humanitarian, and author, Bryan Stevenson MPP 1985, JD 1985, LLD 2015 works to fight poverty and challenge racial discrimination in the criminal justice system. He also serves as an advocate for mentally ill individuals, children who have been sentenced as adults, and those who are abused while incarcerated. He educates communities about racial discrimination in the criminal justice system, poverty, and racial inequality in America. He has successfully argued many cases before the United States Supreme Court; his most recent victory involved a ruling that mandatory, life-without-parole sentences for all children age 17 or younger were unconstitutional.

In 1994, when Congress eliminated funding for death-penalty defenses for indigent individuals, Stevenson founded the Equal Justice Initiative (EJI) in Montgomery, Alabama. EJI has gone on to win relief for 125 people in the United States who were wrongly condemned to death row. In addition, EJI works to reduce and remove bias in the criminal justice system by representing poor people, defending people during the appeals process, and overturning wrongful convictions. It also provides resources for establishing grassroots advocacy efforts and finding volunteer opportunities with prisoner reentry and reform organizations. Last month, EJI opened an African-American history museum in Montgomery that explores the legacy of slavery, racial terrorism, segregation, and the contemporary issues of mass incarceration, excessive punishment, and violence by the police. In 1995, Stevenson received a MacArthur Genius Award, and used all the funding to support EJI’s work. Stevenson is the author of the New York Times bestseller, Just Mercy: A Story of Justice and Redemption (2014). His 2012 TED Talk is one of the most viewed TED Talks.

This award, established in 1997, recognizes an alumnus/a who has significantly improved the human condition at the local, state/provincial, national, or international levels. Recipients will have made a substantial difference for people, organizations, or governments through a single influential act or a series of steps that produced positive societal change. Nominations come from Harvard Kennedy School alumni or faculty. 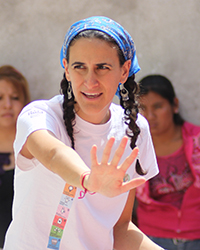 Dina Buchbinder MC/MPA 2016 co-founded Education for Sharing (E4S) a year after she graduated from Instituto Tecnológico Autónomo de México in 2006. She came to Harvard Kennedy School as a Gleitsman Fellow for Leadership in Social Change in 2015 to pursue her Master in Public Administration degree and to learn the best methods to grow her organization. Today, E4S operates in seven (soon to be eight) nations on three continents. E4S uses a rigorously evaluated methodology to form better citizens during childhood using the power of play. Since the organization’s inception, more than 900,000 individuals have benefited from programs including project management, sports, science, and arts for children ages 6 to 13 plus education for their caregivers and teachers. Operating in public, private, and charter schools as well as in homeless shelters and community centers, E4S has partnered with businesses including Build-A-Bear and Ford México to achieve its goals. It has also partnered with the public sector. E4S uses social and emotional learning techniques, and every session combines fun and creative games that prompt children to reflect on global challenges and civic values, including the UN’s Sustainable Development Goals. Quantitative and qualitative appraisals show the organization’s positive impact on issues such as the reduction of violence, an increase in civic participation, better teamwork and fairer play, and an increase in empathy.

This award, established in 2001 and formerly known as the Rising Star Award, recognizes an alumnus/a under the age of 40 who has stood out as a leader or catalyst for change or as a person making a meaningful difference to individuals, organizations, or governments. Recipients exemplify the Kennedy School mission “to improve public policy and public leadership in the United States and around the world through research, teaching, and direct engagement with policymakers and public leaders” at all levels and across all sectors. Nominations come from Harvard Kennedy School alumni or faculty. 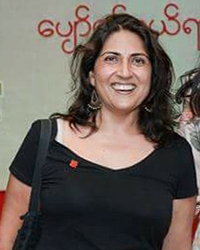 Yasmin Padamsee Forbes MC/MPA 2008 is recognized for her exemplary public service with Kennedy School alumni in Myanmar and beyond, and for her ability to help alumni forge professional and social connections. She served on the HKS Alumni Board of Directors, traveling more than 20 hours from Myanmar for board meeting to help connect HKS with alumni in Asia. In addition, she has worked on behalf of the University through the Harvard Alumni Association’s Asia Pacific Club Leaders group, which included country representatives and regional directors. She has also served as an HKS alumni ambassador and has raised funds for the Adaptive Leadership Network, an HKS Shared Interest Group. Several Reunions for the Class of 2008 have benefitted from her planning, and she has worked on events to highlight female leaders in Boston. She has encouraged agencies at the United Nations to provide internships for HKS students, and has helped the Office of Admissions by contacting newly admitted applicants. Padamsee intends to continue creating opportunities to increase alumni engagement and participation between alumni in Asia and HKS for decades to come.

The HKS Alumni Network of the United Arab Emirates, which was officially recognized as a regional alumni network by Harvard Kennedy School in 2015, has had a significant impact in a short timeframe. The network has developed a tradition of annual events where alumni and leaders from various sectors connect to discuss important issues and policies. In addition, the network holds an annual gala each spring to gather Kennedy School alumni and dignitaries from across the UAE and the Middle East. In 2017, the HKS Alumni Network of the UAE was the only university alumni network in the entire UAE to partner with the organizers of the two-day Mohamed Bin Zayed Majlis for Future Generations event, which attracted thousands of students from across the UAE and which featured information on admission to the Kennedy School and plenary sessions with HKS alumni.

Established in 2014, this annual award recognizes one regional network that has significantly strengthened the alumni community within its region and advanced the network’s ties with the School. Nominations come from an officer of a regional network on behalf of his or her regional network. 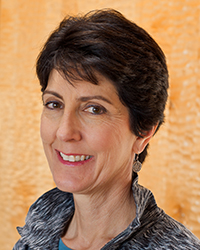 Mary V. Kurkjian MPP 1978 is an experienced information technology and management consultant for organizations in the public sector. Her services focus on management of large IT projects, strategic planning, and the improvement of operations. She has worked in 44 states for motor vehicle, human services, criminal justice, and IT agencies. Before her consulting career, she served in senior management roles in Massachusetts state government at the state employment and training agency and the health and human services agency. She is also the founding director of Harvard Kennedy School’s Senior Executives in State and Local Government Executive Education Program. Kurkjian has given to the HKS Fund for 27 consecutive years, and is currently a member of two of the Fund’s honor societies—the Littauer Society and Loyalty Society.

Established in 2017, this award recognizes an alumnus/a who has demonstrated a long-term commitment to the Kennedy School community through his or her dedicated annual support of any amount. This person, who embodies the power of alumni participation and philanthropy, has shown that gift s of all amounts can have a tremendous impact on students, faculty, and alumni. Individuals are nominated and selected by members of the HKS Fund’s Executive Council.

The Harvard Kennedy School Alumni Board comprises 22 elected members who represent the interests of the global HKS community. These volunteers advise the Office of Alumni Relations on programs and planning to improve connectivity within the alumni networks, enrich the alumni experience, and support the School and its students.

The Harvard Kennedy School Fund Executive Council fosters alumni engagement and cultivates a culture of giving to the Kennedy School. Our members lead efforts to develop a comprehensive volunteer fundraising program while working to increase alumni participation in the HKS Fund.