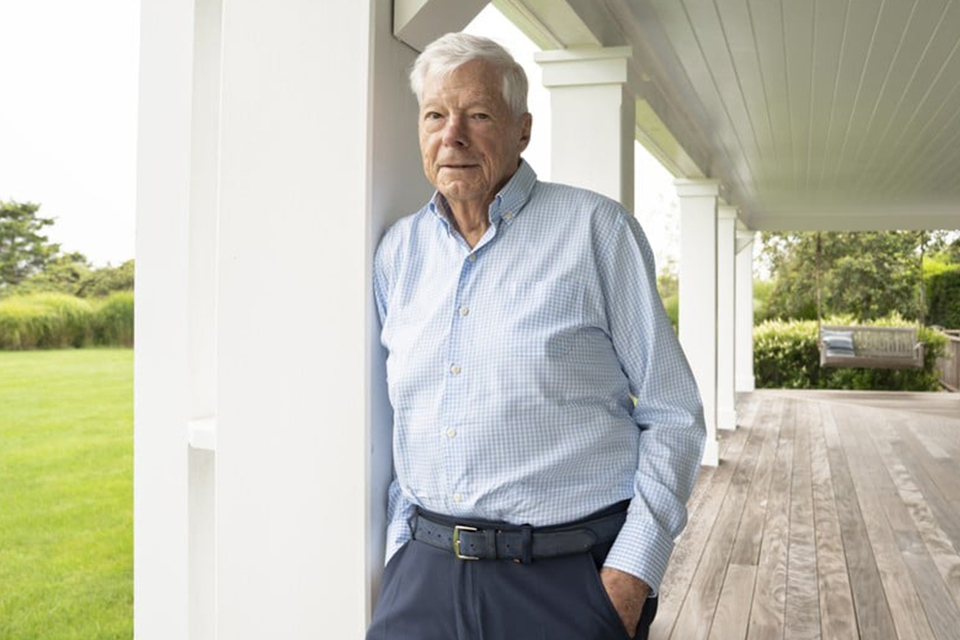 The philanthropist, alumnus, and renowned lawyer and developer contributed immeasurably to the Greater Boston region, including to Harvard University.

Rappaport left an indelible impact at Harvard University and beyond, making it possible for the University to launch many significant initiatives, including the Rappaport Institute for Greater Boston, the student-run Harvard Law School Forum, the HLS Rappaport Forum, and dozens of fellowships and visiting lectureships. He will be remembered for his astute ability to connect theory with practice and public policy as well as for his skill in creating fruitful partnerships across sectors.

“Jerry worked tirelessly to improve the world by better connecting ideas and people,” said Lawrence Bacow, president of Harvard University. “Through his philanthropy and his dedication to public service and public policy, he set an example for all who want to make lasting change in their communities. Harvard is fortunate to be among the many institutions that benefited from his dedication, generosity, and wisdom.”

Born August 17, 1927, in New York City, Rappaport entered Harvard College in March of 1944 as a 16-year-old freshman as part of an experimental joint degree program in which students concurrently advanced toward their undergraduate and law school degrees. At the beginning of his Harvard education, the University was on a three-semester-a-year schedule thanks to World War II, and in the fall of 1945, he began his studies at HLS as an 18-year-old student still working on his baccalaureate.

Not long after joining HLS, Rappaport approached Harvard Law Dean James Landis with the proposal that the school sponsor a speaker series on issues that would shape the post-war world and offer a way to grapple with the real-world implications of the law’s intersection with government and public policy. As described in a Harvard Law Bulletin feature, Landis agreed. By the spring of 1946, in the midst of the Nuremberg Trials, the Harvard Law School Forum hosted its inaugural meeting titled, “War Crimes: Revolution in Legal Theory or Law Enforcement?” Open to the public and filling Harvard’s Sanders Theatre, the forum, which has hosted speakers from John F. Kennedy to Eleanor Roosevelt to Dr. Martin Luther King to Fidel Castro to Thurgood Marshall, became so popular that it was broadcast on radio throughout the Boston area, an anomaly at a time when, as Rappaport put it in a 2017 interview, “people weren’t bombarded with public policy in the media like they are today.”

After graduating from HLS at age 21, Rappaport dove headfirst into the historic 1949 Boston mayoral election, leading the campaign of the reform candidate John Hynes to victory over the legendary machine of James Michael Curley. This was around the time when urban blight and declining industry and retail in the city induced many families to flee to the suburbs. A significant population loss ensued—between 1950 and 1960, Boston’s residents declined by more than 100,000—and people were ready for a change.

Said Rappaport in a 2017 interview: “The challenges were, how do you take the assets of a great city, which had a great tradition, and bring people back to urban areas? How do you create a more stable government and a more fiscally responsible environment, so people would have confidence in the city?”

Rappaport continued to work to elect leaders who shared his vision. He created the New Boston Committee in 1950, a juggernaut that helped elect a young, three-term Representative John F. Kennedy to the U.S. Senate.

Practicing law and representing private clients in a successful attempt to rezone parts of Boston, Rappaport made note of the business climate in Boston at the time. “It was extraordinarily difficult to conduct development—nothing had been built since the 1930s,” he said. “I helped to lift some of the height limits in the city, including in the Back Bay, which was novel at the time.” Rappaport also kept up his work to strengthen public institutions and pushed to establish the City of Boston’s planning office, the Greater Boston Area Regional Planning Agency, and WGBH’s public access television station (channel 2).

When the city moved to request proposals to replace the decaying West End, Rappaport spearheaded a response as a developer looking to leverage the Housing Act of 1949. The project, with the support of the business, labor, and religious communities, became one of the most transformative plans the city had ever undertaken. Charles River Park, a 48-acre development that broke ground in 1960, later became contentious because it razed a neighborhood and displaced low-income residents. He told Nantucket Magazine last summer that “[t]here was a sense of community that could have been handled better. But you have to understand that there wasn’t any experience with relocation at this size or scale.” 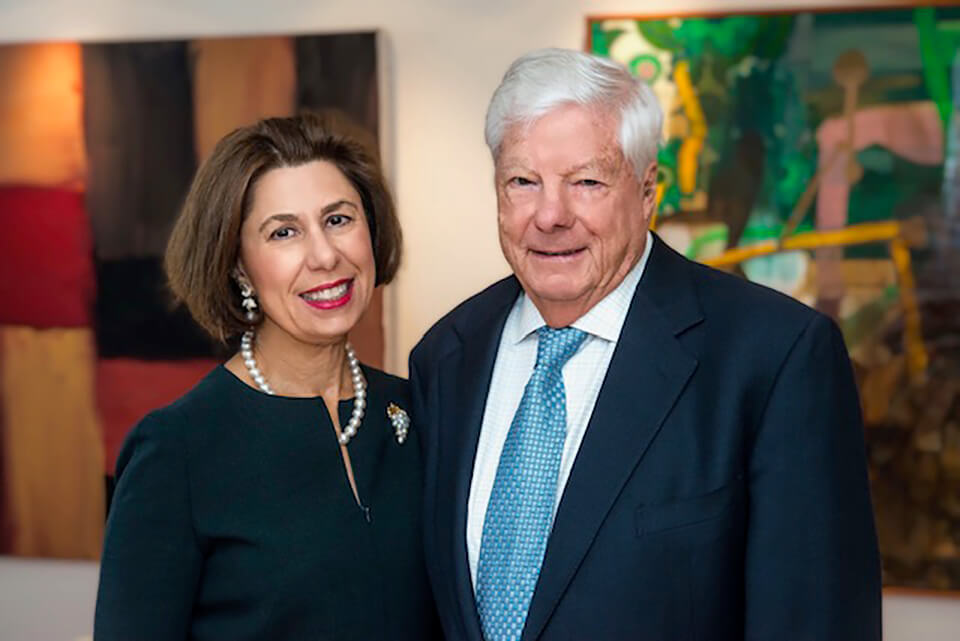 Around the time construction was getting started, Rappaport began reflecting on how he could add to his knowledge. “I had a lot of experience in applied public policy,” he said in a 2017 interview. “But I thought it would be good to come back to Harvard to gain some perspective.” He attended Harvard Kennedy School, graduating in 1963 with his Master’s in Public Administration.

In the 1980s, Rappaport found himself in a position to pay it forward. As he noted: “I sent a letter [to Harvard] saying that I wanted to establish a Rappaport Fellowship for an elected official from Greater Boston…. I wanted people to understand that it was extremely important to understand how to create and implement public policy. Shortly after, I expanded the fellowship to include appointed officials. And the Kennedy School picked up and expanded this effort.”

This was the beginning of his significant philanthropy to Harvard, which also included funding to establish the Rappaport Institute for Greater Boston in 2000. The University-wide entity, housed at the Kennedy School, works to improve the governance of Greater Boston by strengthening connections among the region’s scholars, students, and civic leaders.

HKS Professor Jeffrey Liebman, director of the school’s Rappaport Institute for Greater Boston, said: “For 70 years, Jerry worked to improve governance in greater Boston—starting with the Hynes campaign in 1949 and continuing through to Michelle Wu [AB 2007, JD 2012], whose first taste of city government came through a Rappaport Fellowship.  His vision and generosity broke down barriers between Harvard and its surrounding communities—to the benefit of both.”

The Rappaport Institute also hosts a summer fellowship program, which is open to graduate students from throughout the Boston area, and the Boston Urban Scholars Program, which has, to date, provided full-tuition scholarships to more than 50 elected and appointed officials from Greater Boston to attend HKS’s mid-career master’s program. Alumni include state legislators, mayors, and policymakers working at every level of state and local government.

Said former Rappaport Fellow and recently elected Boston Mayor Michelle Wu: “I am deeply saddened to hear about the passing of Jerry Rappaport, who inspired generations of leaders into public service in Boston. As one of many young people who walked through doors opened by Jerry's commitment to public service, I know his legacy will continue to have a profound impact on our city. My heart is with his family and loved ones.”

Former Rappaport Fellow Meghan Haggerty MPP 2010, chief administrative officer for the Commonwealth of Massachusetts’ Department of Transportation, Highway Division, said: “Mr. Rappaport led an inspiring life of service and civic leadership in the City of Boston. He and his entire family have been incredibly supportive of HKS students and alumni like me who also wanted to serve Boston and Massachusetts. I will always be grateful for his example and support. His legacy will live on through the institute and in the daily work of all the fellows currently serving throughout the Commonwealth.”

Linda Bilmes, faculty director of the Rappaport Greater Boston Applied Field Lab, said: “The Kennedy School and Greater Boston have lost a remarkable friend in Jerry Rappaport. Through his generosity and vision, hundreds of our students have been able to learn about city government directly, through field projects and summer fellowships. Unlike some philanthropists, Jerry not only donated to HKS but participated actively in mentoring students and helping in their careers. He has been central to the revitalization of Boston, including opening up the Boston Harbor Islands, the bikeshare program, expansion of the MBTA, and the flourishing of education, science, and the arts. He was a vibrant man throughout his long life—even last month, he was thrilled at the election of Mayor Michelle Wu, who got her start in city government as a Rappaport Fellow. I am privileged to have known him as a friend, and my heart goes out to Jerry’s beloved wife Phyllis, his children, and grandchildren.”

At the Law School most recently, Rappaport helped establish the HLS Rappaport Forum as a companion to the student-run forum. Launched in 2020, the Rappaport Forum has held a series of timely, robust discussions on topics ranging from to “When Is Speech Violence?” to “Reform of the Supreme Court?” to “Should Congress Enact H.R. 1?” to “Stare Decisis and Roe v. Wade.”

“As a law student in 1946, Jerry Rappaport founded the Harvard Law School Forum, which has added energy and excitement to our community by inviting to our campus prominent people with big ideas and many perspectives from which to learn,” said John F. Manning, dean of Harvard Law School. “More recently, he and Phyllis Rappaport supported the establishment of the Rappaport Forum, which promotes and models vigorous and respectful discourse on the hardest questions facing this nation and our world. Jerry personified and supported the values that are necessary for great academic institutions to be places of learning and growth. A wise advisor to multiple deans, he will be sorely missed. Our thoughts are with Phyllis and the entire Rappaport family.”

Rappaport’s philanthropy extends beyond the Harvard campus to other organizations, including Boston College Law School, Massachusetts General Hospital, Brigham and Women’s Hospital, McLean Hospital, the deCordova Museum and Sculpture Park, and the Atlantic Classical Orchestra. He and his wife, Phyllis, who chairs the family’s foundation, also co-founded the Cure Alzheimer’s Fund. All told, he and his wife, Phyllis, have supported the education of more than 700 current and emerging leaders through partnerships with local academic and artistic institutions, including public policy fellows, medical research fellows, and art prize winners.

“Jerry Rappaport was a champion of Harvard’s work to improve local government for all people,” said Douglas Elmendorf, dean of Harvard Kennedy School. “His vision led to the Rappaport Institute for Greater Boston and the Rappaport Summer Fellowships, which enabled the creation of path-breaking research and nurtured generations of future public leaders. We will all feel his loss deeply.”