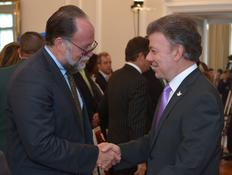 Professor Ricardo Hausmann, director of the Center for International Development (CID) at Harvard University, met today with the President of Colombia, Juan Manuel Santos MC/MPA 1981, to announce the launch of the Colombian Atlas of Economic Complexity.

The online tool will measure the complexity of the Colombian economy, identify growth opportunities, and help orient policy decisions. The Colombian Atlas is a collaborative research project between CID, the Mario Santo Domingo Foundation (FMSD) and Bancoldex.

"Colombia is one of the fastest growing countries in Latin America. Maintaining that position is the primary challenge of the new administration of Juan Manuel Santos," said Hausmann. "The key to sustained growth consists of increasing economic complexity, that is, to improve the ability to produce goods and services that require more diverse and sophisticated capacities and knowledge. The Atlas allows for advances in this direction."

CID's Growth Lab has already produced a global Atlas of Economic Complexity that enables users to visualize a country's total trade, track how these dynamics change over time and explore growth opportunities for more than 150 countries.

The research theories behind the Atlas will be replicated at the sub-national level for Colombia. The Colombian Atlas will map the geographical distribution of Colombia’s productive activities and labor market by department and municipality. The tool will allow users to visualize, for the first time, the existing capacities of each locality and define their productive possibilities.

The Colombian Atlas is featured as a centerpiece of President Santos' new industrial policy that was announced today, less than a week into his second term as president. The tool elaborates on the work that Bancóldex has been undertaking through its Productive Transformation Program and INNpulsa Colombia initiatives.

The project also takes advantage of FMSD's experiences fostering sustainable communities in Colombia. Hausmann gave special recognition to Alejandro Santo Domingo, a Member of the Board of FMSD, for his work to strengthen the living conditions and livelihoods of Colombian families.

"Alejandro Santo Domingo has a longstanding commitment to improve the livelihoods of Colombian communities," said Hausmann. "The Colombian Atlas looks to provide more specific understanding of the links between poverty and economic exclusion, to identify investments and projects to expand economic development and inclusion in Colombia."

For his part, Alejandro Santo Domingo, who as a graduate of Harvard College has maintained close ties to the university in an effort to push the university to place greater emphasis on Colombia, stressed the importance of the Atlas and its relation to the focus of FMSD.

"At the Mario Santo Domingo Foundation, we have advanced in transforming the issue of construction and financing of housing for the poor into something much more complex, as the creation of sustainable communities. The Atlas project is a first step to take advantage of the pioneering steps of CID toward improving productive communities in Colombia, to advance on the path of poverty reduction in the country."

The final results of the project, namely the interactive online platform of maps and analysis, will be available to the public. The approach aims to serve a broader range of stakeholders, from government policymakers to private sector investors.