Cambridge, Massachusetts - Governments play complex roles in modern societies. Responsible for an enormous variety of vital functions, they provide stability, regulate markets, protect citizens and their environment, and offer health care, education, infrastructure, and other public services that help citizens live healthy, productive lives. Engaging with the realities of how governments work is crucial to better understanding the world we live in. Yet studying the way governments do their work is not easy. One reason is the lack of comprehensive and reliable data on what governments do and how they are organized to execute their diverse responsibilities.

The researchers relied on the extensive footprint of agency websites and links that the 50 U.S. state governments leave on the Internet to understand and analyze their functions and the structure they have formed to implement them. This approach – published recently in the Proceedings of the National Academy of Sciences of the United States (PNAS) – generates the most comprehensive and detailed picture to date of U.S. governments and their characteristics.

The picture that emerges reveals that state governments’ structures closely reflect their economies, especially the way their citizens earn a living, and to a lesser degree the income their economies generate and where states are located. And at a time of ideological divisiveness unseen in recent memory, the researchers find surprisingly little association between the ideological leanings of states’ voters and the structures of their governments. Simply put: economically similar states tend to have more similar governments, but ideologically similar states do not. States as ideologically different as Massachusetts and Georgia, California and Florida, or Illinois and Indiana share similar economies and similar governments.

These methods and findings pave the way for a new understanding of the political economy of modern governance and raise a number of questions for closer study. We spoke with the researchers about their work.

1. How well does the internet footprint reflect the real-world government structure?

SK: The reflection is surprisingly accurate. We know governments are highly hierarchical, and the relationships among agencies we see online are very clearly hierarchical. We know government agencies specialize in specific functions (education, roads, police, environmental protection, etc.), and websites that agencies have created online clearly reflect their functions. We know government agencies are created and laws shape their interactions, and the agencies and interactions we observe online clearly reflect the law. Our colleague Evann Smith spent a year hand coding the agencies and interactions mandated by the General Laws of Massachusetts – all the agencies that by law are supposed to exist, and the ways that they are supposed to interact by law. The online footprint does not perfectly reflect these, but it comes remarkably close: most agencies mandated by law have websites, and we generally see the way agencies are required to interact reflected online as well. No data are perfect, but altogether the online footprint provides an unusually detailed, comprehensive, and valid picture of what state governments do and how they are organized.

2. The online footprint reflects a range of functions that exceed the “most comprehensive current national classification of government functions”, the one provided by the U.S. Census Bureau’s Census of Governments. What were the missing functions from the available list, and what does this tell us about the awareness and perception of governments’ actions and responsibilities within modern society?

SK: This was one of the more interesting findings for us. The Census covers many government functions, but it does not include a large number that agency websites regularly describe as their primary functions, among them international trade; financing authorities; ethics, lobbying, and campaign finance commissions; utilities regulation; civil and human rights; support for children and families; and public and indigent defense. We don’t believe that these will be surprising to most Americans, who know that their state governments have agencies engaged in these activities. But it is interesting that our most comprehensive national classification does not include them. In the paper, we develop an expanded classification system that includes the full functional range of state governments reflected online.

3. How did you evaluate similarities and variations in U.S. state governments’ structures/functions, and what are your most striking results? How can these results effectively change our knowledge and perception of how governments work?

SK: We think the online footprint is particularly useful for understanding a few things. In addition to the functions governments perform, the online footprint also reflects the scale of their implementation of these functions, by reflecting how many agencies are devoted to the function. The online footprint also reflects interactions among agencies engaged in different functions. Commerce agencies often connect to agencies that promote international trade, for example, or agencies in protection of the natural environment often connect to agencies that promote tourism. When we examine similarities and differences across states, we found that states vary widely in the functions they perform and in the scale and connections of the structures they have established to perform them. We started this work expecting that differences in the scale of state governments would partly reflect the size of their populations. Many state functions involve a lot of face-to-face interaction between citizens and officials (sometimes called “frontline providers”), so you might expect greater scale for governments in more populous states. We see this tendency in education and municipal and county administrations, but not in other state functions. That led us to explore other factors that might explain the wide variation we observe, including state income, location, ideology, and the structure of state economies. 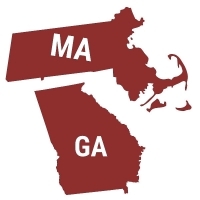 For example, Georgia and Massachusetts are about as ideologically dissimilar as any two states in the US, but they have similar economies, and Georgia’s government is far more similar to Massachusetts’ than to its northern neighbor South Carolina

4. When you say that economic structure exceeds income, location, and above all ideology when accounting for governments’ differences, what does this tell us about the dynamic between politics and economy?

SK: Anyone who studies politics knows that the economy and government are very closely connected; jobs and the strength of the economy are always at the forefront of election campaigns, for example. What surprised us is that once we accounted for how citizens in a state earn their living, we don’t see as much of a role for income, location, and especially for ideology. The lack of association between ideology and any of our measures of government functional structure surprised us in particular. After all, ideology is partly about differences of opinions about the proper roles and functions of government. But what we saw instead is that when two states had similar economies, they were very likely to have similar state governments – even when those states were ideologically very different. For example, Georgia and Massachusetts are about as ideologically dissimilar as any two states in the US, but they have similar economies, and Georgia’s government is far more similar to Massachusetts’ than to its northern neighbor South Carolina. Another example is California and Florida, which are also ideologically dissimilar but have similar economies – and similar governments. We are currently exploring this apparent disconnect more closely.

5. Can we use this model for a critical evaluation of what works and what does not in governments? In other words, can this empirical analysis be read as a map to foster policies?

RH: Not yet. This is in the to-do list. We need to explore the relationship between government structure and policy outcomes.

6. Is this model applicable outside the U.S.?

RH: We believe that the method will travel well, but I suspect that when work is done in other countries we will find that the structures of government vary substantially across the world in dimensions we have yet to explore.

SK: We believe there are a wide range of additional questions and puzzles about government structure, evolution, relations, and effectiveness that this new window on government enables scholars – and anyone else who is interested – to more closely explore. To that end, we have released the data and are finishing a website that will offer easy access to the data as well as additional visualizations.