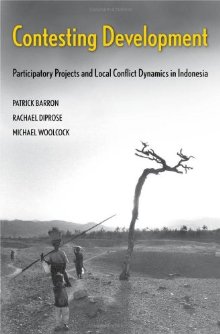 The book explores the conditions under which the Kecamatan Development Project (KDP), a nation-wide community development initiative, helped and hindered local institutional change as Indonesia embarked on a series of democratic reforms following the fall of the Suharto government in 1997. Deploying an integrated array of qualitative and quantitative methods – from ethnographies and interviews to case studies and matched comparisons – the research team sought to investigate how KDP, which allocated sources to villagers on the basis of participatory decision-making processes and the active inclusion of marginalized groups (such as widows), engaged with ongoing village conflicts and political dynamics.

At a time when many researchers seek to attribute development impacts solely to a project’s design, and to render judgments about efficacy, replication and scale-up on the basis of average effects, Contesting Development demonstrates that certain projects inherently have highly variable impacts, that this variance – when properly tracked – can be a valuable source of real-time feedback for making mid-course corrections, that the nature of the political context and quality of implementation matters at least as much as a project’s design for determining impact, and that even the best development projects generate conflicts because they alter (by design or default) prevailing social relations, expectations and power. Anticipating and responding adequately to the conflicts that projects generate is key to building legitimacy and sustaining effectiveness. As such, says Woolcock, the book’s key message "is the importance of understanding contexts and contests when designing, implementing and assessing development projects, especially those that seek to facilitate local level institutional change." While Woolcock’s regular employment is with the World Bank’s Development Research Group, at least fifteen HKS students were involved in this research to a greater or lesser extent over many years, and several of them continue to work on related development issues in Indonesia.

Contesting Development is available at Amazon.com.