The Atlas of Economic Complexity: Mapping Paths to Prosperity (2013) 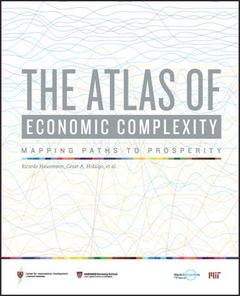 The Atlas of Economic Complexity: Mapping Paths to Prosperity (2013)

It has been two years since we published the first edition of The Atlas of Economic Complexity. "The Atlas," as we have come to refer to it, has helped extend the availability of tools and methods that can be used to study the productive structure of countries and its evolution.

Many things have happened since the first edition of The Atlas was released at CID's Global Empowerment Meeting, on October 27, 2011. The new edition has sharpened the theory and empirical evidence of how knowhow affects income and growth and how knowhow itself grows over time. In this edition, we also update our numbers to 2010, thus adding two more years of data and extending our projections. We also undertook a major overhaul of the data. Sebastián Bustos and Muhammed Yildirim went back to the original sources and created a new dataset that significantly improves on the one used for the 2011 edition. They developed a new technique to clean the data, reducing inconsistencies and the problems caused by misreporting. The new dataset provides a more accurate estimate of the complexity of each country and each product. With this improved dataset, our results are even stronger.

The online sister site of this publication, The Atlas online, has been significantly enhanced with the use of an updated dataset which now covers up to 2013; the addition of bilateral trade data; and the inclusion of trade information classified according to the Harmonized System, a recently developed dataset which goes back to 1995, as well as the more traditional Standard International Trade Classification (SITC-4) dating back to 1962. Also, The Atlas online now includes multilingual support, country profiles, bulk data downloads, and a large number of design features, including dynamic text for the Tree Map visualizations and an improved design of the Product Space visualizations.

The Atlas online was originally launched as The Observatory and was developed by Alex Simoes with the assistance of Crystal Noel. The Atlas online is currently managed by Romain Vuillemot at the Center for International Development at Harvard University.

All in all, the new version of The Atlas provides a more accurate picture of each country’s economy, its "adjacent possible" and its future growth potential.