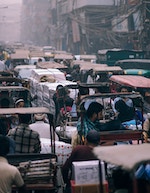 Women and Work in India

Women and Work in India: Descriptive Evidence and a Review of Potential Policies

Sustained high economic growth since the early 1990s has brought significant change to the lives of Indian women, and yet female labor force participation has stagnated at under 30%, and recent labor surveys even suggest some decline since 2005. Using a nationally representative household survey, we lay out five descriptive facts about female labor force participation in India that help identify constraints to higher participation. First, there is significant demand for jobs by women currently not in the labor force. Second, willing female non-workers have difficulty matching to jobs. Third, obtaining vocational training is correlated with a higher likelihood of working among women. Fourth, women are more likely to be working in sectors where the gender wage gap and unexplained wage gap, commonly attributed to discrimination, is higher. Finally, female-friendly policies, including quotas, are correlated with higher female participation in some key sectors. Combining these facts with a review of the literature, we map out important areas for future investigation and highlight how policies such as employment quotas and government initiatives focused on skilling and manufacturing should be better investigated and leveraged to increase women’s economic activity.