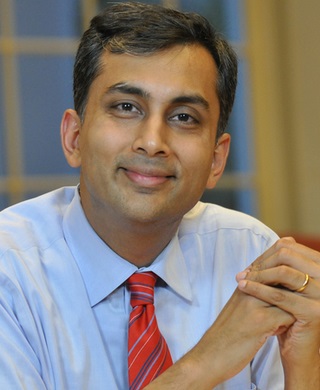 Mihir Desai: They’ll come from where they’ve always come from—technological change and the opening up of markets. The most dangerous element of the current concern with the “future of jobs” is the turning away from, and suspicion of, technology and markets. Don’t get me wrong—we need much better policies for adapting to these technologies and controlling the excesses of markets, but we shouldn’t turn our backs on the basic recipe.

Mihir Desai: I’m more sanguine about this than most. Measured on a global scale, income inequality has decreased dramatically over the last several decades and the improvements to poverty levels globally has been remarkable. And that’s not just some kind of “China effect.” It’s only the drawing of national boundaries that changes that conclusion on income inequality. I’m much more interested in improving median wages in the U.S. context and in making sure the gains from productivity changes are shared more widely. Indeed, I fear that the emphasis on income inequality is leading us away from those more interesting questions.

GrowthPolicy: Let’s talk about your latest book, The Wisdom of Finance. In the book’s final chapter, “Why Everyone Hates Finance,” you argue that somewhere down the line, the practice of finance has acquired associations of untrammeled greed and disrepute, yet neither was this always the case nor was this embedded within the historical origins of the profession. What would you suggest the profession, or we, as a society, do to restore the humanity of finance?

Mihir Desai: I think we need to reconnect to stories and detach ourselves somewhat from spreadsheets and screens. The increasing quantification of finance has been wonderful for many reasons, but it has had this dehumanizing effect on the field—which in turn has led to much bad behavior. The book takes the unorthodox position that reconnecting to the underlying ideas of finance and understanding their moral content will improve behavior more than any other solution out there.  So the book effectively uses the humanities—literature, history, philosophy, and even popular culture—to try and humanize finance, and restore humanity to the practice of finance. Fortunately, the humanity of the ideas of finance is everywhere once you start looking for it. It’s just gotten obscured for most people by layers of abstraction and jargon.

GrowthPolicy: Your writing in The Wisdom of Finance reveals an astonishing expertise across multiple fields of knowledge: the social sciences, humanities, and cultural studies, among others. What most people forget is that studying discrete fields of knowledge in relationship to each other, something you do so well in this book, was the norm for much of human history, until, one might argue, the Age of Enlightenment began the movement towards classifying and separating information (e.g., Denis Diderot’s Encylopédie and Samuel Johnson’s Dictionary). What did writing this book reveal to you about the importance of going back to interdisciplinarity in thinking and scholarship?

Mihir Desai: I’ve spent my academic career as a pretty traditional economist using theory and empirics to understand phenomena. As an economist, I was trained to be suspicious of stories (i.e., n=1).  In writing this book, I rediscovered the power of stories in explaining ideas and in connecting ideas. And, this reimmersion in humanities allowed me to connect seemingly distant questions and ideas. The specialization of academia has allowed for so many fantastic advances but it has come at this cost of insularity and detachment from broader concerns. The real tension as a scholar is that one needs to cultivate specialization early in one’s career and then open up the possibility of interdisciplinarity later when those foundations are well-built. Interdisciplinarity is fantastic but it shouldn’t come at the cost of solid foundations.

GrowthPolicy: Shifting gears to taxes, you’ve said in a recent piece that the “reality is that the existing portfolio of tax instruments is too small to be an effective tool for serious tax reformers.” Tell our readers what, in your opinion, would be the components of an ideal tax plan.

Mihir Desai: An ideal tax plan is less interesting than a somewhat practicable outline of what we could achieve. That outline, in the U.S. setting, would include the adoption of a traditional credit-invoice method value-added tax, a serious effort at a carbon tax, a new top bracket and rate that would separate out people making $1.5 million+ from those making $500K, a significant expansion of the earned income tax credit that would help those at the bottom end of the income spectrum rather than obsessing over the “middle class,” and a corporate tax with a 20% rate and territoriality. Such a plan could restore fiscal balance, speaks to current tastes for redistribution, and could make the U.S. a more attractive place to invest, hopefully leading to rising median wages. What we got in the most recent package is a far cry from that.

GrowthPolicy: In your article in The Atlantic, you make a provocative claim: “The market for financial frauds, like those for labor and drugs, depends on demand as well as supply.” How much of this phenomenon is a function of human greed on the part of professional investment managers? Or is this a case of investors misreading the presumed efficiency of capital markets?

Mihir Desai: In the market for financial fraud, we usually punish the supply side—the hucksters who create Ponzi schemes and such. But so many of the so-called victims in these situations (e.g., the Shkreli fraud trial) are supposedly sophisticated investors who are either suspending disbelief consciously or shouldn’t be considered sophisticated investors. There simply are too many outlandish claims to think that these investors don’t have a sense of what is happening and are just hoping not to be the last person without a chair when the music stops. Unless we understand that basic dynamic, we can’t really address the dynamic well and may, in fact, be encouraging more silliness.

GrowthPolicy: Your essay on Apple and Google observes that each company follows a different, perhaps even diametrically opposed, model apropos of shareholders’ interests versus maintaining founders’ control. What do these two models tell us about, or predict for us, the story of twenty-first-century capitalism and the direction this story will take?

Mihir Desai: The article hints that the investor-led model manifest in the shareholder revolt at Apple is becoming the norm across corporations. Outside of the frothy world of Silicon Valley, the founder/manager-led model is losing its hold.  I think we need to understand the excesses of both models better and navigate a better intermediate path as we have swung toward investor-led capitalism (not shareholder-led capitalism) in a way that is starting to show up negatively in many ways from the appetite for share buybacks to the fetishization of alternative assets.