Tarun Khanna on the jobs of the future, how entrepreneurs can build trust, and institutional voids | Harvard Kennedy School
Skip to main content

Tarun Khanna on the jobs of the future, how entrepreneurs can build trust, and institutional voids 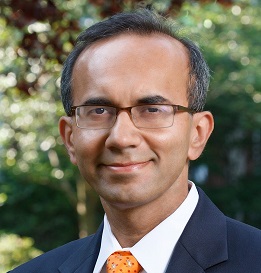 March 2019. GrowthPolicy’s Devjani Roy interviewed Tarun Khanna, Jorge Paulo Lemann Professor at Harvard Business School and Director of the Lakshmi Mittal and Family South Asia Institute at Harvard University on the jobs of the future, how entrepreneurs can build trust, and the concept of “institutional voids.” | Click here for more interviews like this one.

Tarun Khanna: To an inveterate optimist, the future is exciting. There are so many changes around us necessitating the creation of new livelihoods that it’s hard to imagine that there will not be a variety of currently unimagined, or under-imagined, categories of employment. Think of personalized medicine, cars and public-transport-as-mobile-batteries on transmitting roads, approximately-bionic-humans, and scientifically engineered foods. Equivalently, think of the need to deal with problems—top of mind for me are adapting to climate change and dealing compassionately with refugees-from-distress. Each of these changes will create new job categories that will require recombining the skills that are needed for existing avocations. This creative recombination is exactly how new categories have always come into being.

GrowthPolicy: In your latest book, Trust: Creating the Foundation for Entrepreneurship in Developing Countries, you note: “Fake news has acquired new salience in the era of current U.S. President Donald Trump, who subscribes to his own alternate reality while accusing mainstream media of misrepresentation. Yet poor information is a societal problem, not only a Trump-era problem, and demands a societal response” (p. 13). Broadly speaking, for companies and entrepreneurs in the U.S., what would you suggest for building trust and consumer confidence in an age of distrust and “bottomless Pinocchios” (to use a term the Washington Post has popularized)?

Tarun Khanna: The core problem is that repeated exposure to verifiably demonstrable mistruths has appeared to convince people that those statements are facts. This, in itself, is not a new tendency. It’s well known that we all have biases, one of which is to seek out confirming information to validate our priors—so an alienated electorate wants to believe what the current US President says. The extent to which this has happened in the U.S. is unprecedented in modern times, and unexpected, and I suppose is a commentary on a preexisting societal schism. So, now imagine a world in which we have largely distinct groups of self-referentially absorbed individuals. Within each such ‘universe’ it’s entirely feasible to believe opposing things about a particular issue. (In this context, everybody should re-read Do Androids Dream of Electric Sheep, the inspiration for the Blade Runner classic movie, by the way, as a meditation on how different types of individuals—in that case the ‘Andy’s’ or androids, can live self-referentially and perhaps even delude themselves into thinking they’re human; I’m paraphrasing!) How to get out of this impasse? We need boundary spanners, people who can connect these otherwise isolated self-referential blocks. My hunch is that’s where the trust building starts. So we’ll have to violate the popular nostrum for family harmony, ‘no politics at the dinner table,’ and instead embrace the idea of learning to talk across these divides. That’s messy and unpleasant but it’s an investment in the future and like any other investment, it’s costly! By the way, in a recent post, I argued that the US is very much a ‘developing country’ in many senses: https://www.continuuminnovation.com/en/how-we-think/blog/developing-trust-isnt-just-for-developing-countries

GrowthPolicy: Arguably, the management concept you are most famous for is the “institutional void.” Could you please explain for our readers what the concept means and why it is important?

Tarun Khanna: “Institutional void’ is a term my coauthor and I coined in 1997 in an article in the Harvard Business Review. We used the idea to explain why the results of entrepreneurial or policy actions might have very different results in institutionally-compromised settings than the same actions would in more mature settings. Briefly, the idea is that there are a range of specialist services that make the buying and selling of things—anything, tangible things like your phone or intangible things like ideas or legal or medical advice—possible. Think of executive search firms that help you identify, evaluate, and shepherd management talent, think of rating agencies that decide which municipal bond a retail investor can buy to suit her risk profile, think of IP (intellectual property) valuation firms that help folks buy and sell ‘ideas,’ and so on. These are examples of missing soft infrastructure, every bit as important as the hard infrastructure that is visibly absent in developing country settings. “Void” refers to the absence of these specialist services. Much of my work over the past decades has characterized these voids taxonomically and explored their implications for actions in emerging economies. Relatedly, they allow us to develop an entrepreneur-centric view of economic development (rather than one centered, much more squarely, primarily on top-down policy action or aid or what have you).

GrowthPolicy: This question is based on your recent article in Harvard Business Review, “When Technology Gets Ahead of Society.” What can tech entrepreneurs in developed economies learn from entrepreneurs in emerging markets about creating or co-creating institutional support structures?

Tarun Khanna: That article is based on intellectual arbitrage of sorts. I have spent some time these past years building new-age tech companies myself, with applications to emerging markets. My observation through those activities is that it’s sometimes like managing in the rule-starved world of developing countries. Simply, when new technologies emerge—think personalized genomics, space travel, or bioengineered food—societies don’t have experience with them to set up the guardrails to guide and adjudicate their use, for private and social gain. But this absence of support structures is exactly what I’ve studied and worked with in developing countries. So the article draws on that equivalence. The simplest summary of this is that entrepreneurs cannot just create, they must create the conditions to create—that is, help build out the ecosystem that sets up the guardrails I mentioned earlier.  If that sounds idealistic, it isn’t just that.  In my book, Trust: Creating the Foundation for Entrepreneurship in Developing Countries, I show how practical and, in fact, even self-serving, this seeming-altruism is.

GrowthPolicy: My final question is about “contextual intelligence,” a concept you define as “the ability to understand the limits of our knowledge and adapt that knowledge to an environment different from the one in which it was developed.” In the course of your vast research across geographies, what have you learned about the errors and misconceptions of companies in the developed world when it comes to succeeding in emerging markets?

Tarun Khanna: Well, the article was written to explore why when we try to take our skills to settings other than those in which they were incubated and developed, or when we try to imitate ideas that seem to work elsewhere into our own milieu, it’s much harder than we’d imagined.  Most of the time, anyway! As I say in the article, paraphrasing, “The hard stuff is easy, the soft stuff is hard.” That is, the technical things that we think of, for example, as ‘hard science’ say, are relatively easy to get right in the grand scheme of things. The ‘soft stuff,’ that’s amorphous and hard to codify, is really hard to get right. Because it’s not easy to measure, it’s not easy to manage, and entrepreneurs and organizations ignore it at their peril. That article gets used a great deal by MBA students, executives, board members, policymakers in emerging markets, what have you, and anyone who has experienced the difficulties of exploring the limits of their expertise recognizes what I’m speaking about. It was fun to write it as a reflective exercise after some decades working on this complex problem.