Lessons from the Financial Crisis

Lessons from the Financial Crisis

There are many important lessons that can be learned that may help mitigate the impacts of a financial crisis in the future. Lewis B. Kaden, retired Vice Chairman of Citigroup, M-RCBG senior fellow, and John Harvey Gregory Lecturer on World Organization at Harvard Law School, shared some of these lessons during a Regulatory Policy Program seminar on April 9.  Harvard Kennedy School Professor Joseph Aldy, who is the faculty chair of the Regulatory Policy Program, moderated the discussion.

According to Kaden, many lessons concern the functions of the major financial institutions themselves. These include practices and policies related to risk management, information technology, compliance, and human resources.

When it comes to risk management, for example, Kaden suggested that banks should make sure that their risk management models not only exist for each division, but also extend across divisions.  That practice would have been valuable to many banks during the financial crisis, including Citigroup, allowing them to grasp the extent to which all divisions were concentrated in housing-related instruments and investments, and not merely how each division separately concentrated its risk in housing.

Another bank function that should be enhanced relates to human resources. Because people are a bank’s most important asset, it is imperative that human resource departments have the talent and capabilities to recruit, hire, train, and retain the best people. Yet, according to Kaden, “human resources is not a talent-driven function in most large organizations.”

Kaden said that factors related to ethics, contagion, convergence, consumer education, bank governance structures, and regulatory structures also need to be improved to anticipate and prevent financial crises. For example, Kaden contended that too many agencies in the U.S. have overlapping responsibilities when it comes to financial regulation, which creates challenges for banks. Or, to point to another example, Kaden argued that ethics, culture, and compensation need to align to avoid the ethical breakdowns that occurred during the financial crisis. Compensation sends important messages about an organization’s values. If a bank’s risk manager is paid substantially less than those who run its businesses, the risk manager will be considered less important.

The most recent financial crisis offers many lessons, both for the internal management of banks as well as regulatory policy. Understanding these lessons is the first step in preventing crises of the future. 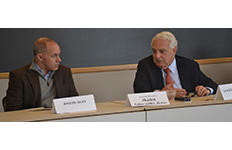