The Role of Chemicals Reporting in Controlling Hydraulic Fracturing Risks

The Role of Chemicals Reporting in Controlling Hydraulic Fracturing Risks

When producers extract oil and gas using hydraulic fracturing, they inject water and chemicals deep into the earth. The federal government has little authority to regulate associated environmental risks, and states are only beginning to establish laws specific to this form of oil and gas production. Given the absence of regulatory authority at the federal and state levels, what’s the best way to safeguard environmental quality?

Since 2010, 28 states have required producers to report the chemicals they use in hydraulic fracturing to FracFocus, a publicly available database managed by the Groundwater Protection Council and the Interstate Oil and Gas Compact Commission. According to Konschnik, oil and gas producers started reporting to FracFocus voluntarily to boost public confidence in their operations. States saw requiring producers to report on the chemicals they used “as an easy way to regulate,” she said.

Konschnik explained that early voluntary efforts produced data riddled with problems, including frequent errors in chemical names and well site locations. Many producers withheld information on the grounds that they considered it confidential. An additional problem was that until recently, information for each well was provided in a PDF format, requiring users to download information about each well individually and making aggregation and analysis nearly impossible.

Konschnik published a report highlighting these problems in 2013. In the wake of concerns she and others raised, the Secretary of Energy’s Advisory Board investigated FracFocus and issued a series of recommendations for improving data quality and transparency on the site. In addition, EPA commissioned its own study of FracFocus errors and published a notice in the Federal Register stating its authority to require hydraulic fracturing chemicals reporting under the Federal Toxic Substances Control Act. In subsequent years, states have worked with FracFocus to improve data quality and usability, although problems remain.

Seminar participants raised numerous questions about Konschnik’s presentation. Might the focus on information reporting and disclosure distract attention from more meaningful regulation of hydraulic fracturing? Who will likely use the information that companies report, and how? Konschnik acknowledged that chemicals reporting and disclosure will not reduce risks from hydraulic fracturing on their own. She explained, however, that such steps may encourage more meaningful public engagement and regulation in the future. With further improvements, the public, stakeholders, and regulators could make use of the information. In addition, some states are using the information in novel ways. Idaho and Wyoming, for example, require producers to report chemical names and quantities before and after fracturing, allowing them the opportunity to perform baseline testing in the well vicinity and monitor the presence of reported chemicals on an ongoing basis.

Konschnik continues to work to strengthen the quality and usability of hydraulic fracturing chemicals information, and she welcomed input from anyone interested in contributing to this effort. 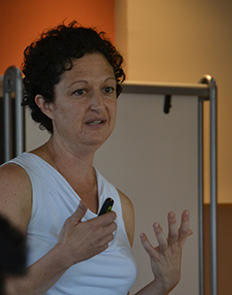