This semester, Ed Balls will be leading a study group on progressive economic policy in the age of Trump and Brexit. Ed Balls is a Senior Fellow in the Mossavi-Rahmani Center for Business and Government and a former UK Cabinet Minister, Shadow Chancellor and Treasury Chief Economic Adviser.

It has been a turbulent start to the new millennium across the developed world for economic policy makers who care about growth and inequality. Political upheaval including the rise of far left and far right politicians and parties, a shift towards ‘America First’ here in the US, and in Europe, Brexit, the Euro crisis and the wider challenge of integration, have together made the current policy environment very challenging. Adding to these challenges are the global financial crisis and its political, fiscal and regulatory aftermath. These pressures have been compounded by trends towards parallel published in media, and communications.

These study groups will look at what lessons current and future policy makers can learn from these events.

The group sessions are as follows:

The events of 2016 defied all expectations, what can it teach us about progressives’ assumptions?

The first study group will look at the long held assumptions that led many progressives to be so surprised by the political shocks of 2016. The turbulence since the millennium: stagnation of productivity and real wage growth, and rising inequality; all suggest that some policies may need revisiting. This session will review the challenges of the current politic environment, and ask whether assumptions held by progressives have contributed to the rise of populist forces and anti-globalisation trends, and which aspects of the status quo may not exist in a decade.

Ed Balls
Ed Balls was UK Shadow Chancellor from 2011 to 2015 and co-chaired the Inclusive Prosperity Commission with former US Treasury Secretary, Larry Summers, which reported in January 2015.  He served in the British Cabinet as Education Secretary (2007-2010). He was previously the UK Minister for Financial Services (2006-2007) and the Chief Economic Adviser to the UK Treasury (1997-2004), during which time he was the Chair of the IMFC Deputies and UK G20 Deputy.

He was the Labour & Co-operative Member of Parliament for Morley and Outwood (2010-2015) and MP for Normanton (2005-2010).  As Chief Economic Adviser to the Treasury (1997-2004), Balls led the design of policies including independence of the Bank of England, the New Deal jobs programme, the Five Tests Euro assessment, Sure Start, tax credits and the national minimum wage. As a Treasury Minister, he was commissioned by the G7 Finance Ministers to prepare a report with Sir Jon Cunliffe (now deputy Governor of the Bank of England) on Economic Aspects of the Israel-Palestine conflict.

At the Department for Children, Schools and Families, Balls brought together schools and children's policy for the first time in the Children's Plan and pushed through radical and progressive policies including raising the education and training age to 18, reform of the social work profession, establishing the support staff negotiating body and extra investment in youth services and short breaks for disabled children and their families.

As Shadow Chancellor, he was awarded the Spectator Parliamentarian of the Year and the Political Studies Association Politician of the Year.  Balls received his MPA from HKS in 1990, was a teaching fellow in Harvard’s Department of Economics (1989-90), and was a leader writer and columnist at the Financial Times (1990-94) where he was the WINCOTT Young Financial Journalist of the Year. He has also written regularly for the Guardian, New Statesman and Tribune and co-authored a number of books, papers, articles and pamphlets.

Most recently he has wowed British audiences with his appearance on Strictly Come Dancing.

His faculty sponsor is Lawrence Summers, Charles W. Eliot University Professor of Harvard University and Director of the Mossavar-Rahmani Center for Business and Government. 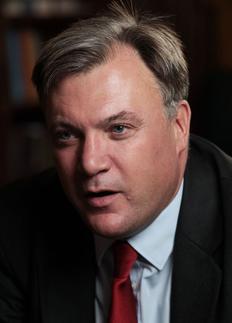