Digital advocacy organizations are a novel, significant addition to the international arena and are shaping public opinion on climate change, trade and refugees. They derive power from their ability to rapidly mobilize members online and offline on a range of issues, in contrast to most non-governmental organizations (NGOs) which wield power through their expertise on, and long-term commitment to, a single issue. Digital advocacy organizations have built a transnational network around a common mode of advocacy, and share technology, tactics, and strategies. Despite operating in a globalized world they tackle transnational problems by focusing on national targets because they see the state as the locus of power. International relations scholars have acknowledged the power of networks in international politics, but have not examined this new generation of digital advocacy organizations and how they are harnessing digitally networked power. 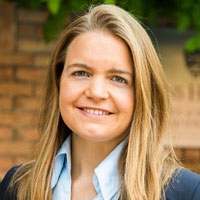 Nina Hall is an Assistant Professor in International Relations at Johns Hopkins School of Advanced International Studies (SAIS). Her research explores the role of transnational advocacy and international organizations in international relations.  Her most recent book, Transnational Advocacy in the Digital Era, will be published with Oxford University Press in 2022. The book examines the growth and global spread of digital advocacy organizations, and how they are reshaping advocacy on climate change, trade and refugee rights.  She has previously published in the International Studies Quarterly, European Journal of International Relations, Global Environmental Politics, and Global Governance. Her first book was Displacement, Development and Climate Change: International Organizations Moving Beyond their Mandates? (Routledge, 2016). She previously worked as a Lecturer at the Hertie School of Governance and has a DPhil (PhD) in International Relations from the University of Oxford. She is the co-founder of an independent, progressive think tank, New Zealand Alternative. In 2021 she was a Senior Fellow at the Weizenbaum Institute (the German Internet Institute) in Berlin. She is currently a Faculty Affiliate at the SNF Agora Institute at Johns Hopkins University, and a Research Associate at the Centre for Strategic Studies, Victoria University of Wellington, New Zealand. Email: nhall@jhu.edu

Ioana Petrescu is a Senior Fellow at the Mossavar-Rahmani Center for Business and Government and the President of Simply Green, a Romanian environmental NGO. Dr. Petrescu is a former Romanian Finance Minister. While minister, she pursued policies to cut tax evasion and tax avoidance, promote financial transparency, improve tax compliance, lower the tax burden for businesses and keep fiscal discipline. She also served in the government as an economic adviser to the prime minister and head of his delivery unit, where she monitored the implementation of the prime minister’s priorities in procurement, employment, energy and tax compliance. She is an international consultant on issues such as tax reform, central government delivery and local public services and runs the Center for Leadership and Innovation at the National School of Political Science and Public Administration in Bucharest. In the past, she also served as an expert for the European Economic and Social Committee in Brussels. She was an Assistant Professor at University of Maryland and she holds a Ph.D. in economics from Harvard. She published in various academic journals and newspapers. Her 2017 book, Essays in Taxation and International Relations, analyzes issues such as flat taxation and government revenues. Ioana’s research project, Making Public Policy in Adolescent Democracies: Paths to Adulthood, explores good practices in the delivery of public goods and services in new democracies characterized by corruption and clientelism, low paid bureaucrats, poor institutions, frequent political turnover, unclear legislation, and little transparency. Her faculty sponsor is Jeffrey Frankel, James W. Harpel Professor of Capital Formation and Growth at Harvard Kennedy School.  Email: ioanapetrescu@hks.harvard.edu