One of the central concerns about how to produce more equitable and just outcomes has been how to make the police accountable for their misconduct. Deborah Ramirez, Professor of Law at Northeastern University School of Law joined us to discuss her four-part solution, which includes restricting police union’s collective bargaining and narrowing qualified immunity by using professional liability insurance, efforts that should save lives by detecting, preventing, and deterring police misconduct. (See her 2021 article, "Policing the Police: A Roadmap to Police Accountability Using Professional Liability Insurance," for more information.) 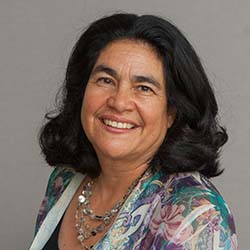 Deborah Ramirez is a Professor of Law at Northeastern University School of Law. She teaches criminal justice for first-year students and advanced courses in criminal justice, race and reform. She also actively engages the student body in topics relating to criminal law and works on strategies and initiatives to reform the criminal justice system. Beyond this, she works extensively with Northeastern’s Latin American Law Students Association (LALSA).

Professor Ramirez is the chair and founder of Northeastern Law’s Criminal Justice Task Force, now part of the newly-formed Center for Law, Equity and Race (CLEAR), which brings together academics, lawyers, judges and allies focused on a myriad of criminal justice reform issues, including exploring the historical roots of racial disparity and mass incarceration, trying to harness the full strength of our reentry networks, bail reform, restorative justice practices and juvenile justice issues.

Professor Ramirez frequently works with academia, law enforcement, politicians and community leaders to ensure police accountability. She has testified numerous times before the US House of Representatives and state legislatures about related issues, written about these issues for national media outlets, including The Boston Globe, and has been interviewed by ABC News, “Good Morning America,” and NPR, and quoted in The Washington Post and Risk & Insurance, among others. She has also published numerous articles on criminal justice in leading journals, including the American Journal of Criminal Law, Temple Political and Civil Rights Review and Georgetown University American Criminal Law Review.

Before joining the Northeastern faculty in 1989, Professor Ramirez was an associate with the Boston law firm of Hale and Dorr and an assistant US attorney in Boston, where she was assigned to the Organized Crime Drug Task Force Unit. In that position, she was in charge of numerous investigations and trials, and handled appeals before the US Court of Appeals for the First Circuit.