For low-income communities of color, police engagement can produce more harm than good. Indeed, a growing body of research indicates that aggressive policing tactics lead to poor health, educational, and employment outcomes for adults and children. The Anti Police-Terror Project, a San Francisco Bay Area organization, supports families that have survived police terror with resources, referrals, and opportunities to heal. Importantly, it also seeks to eradicate police terror in their communities. We spoke with Cat Brooks, co-founder of APTP to learn how and what outcomes their efforts have produced. 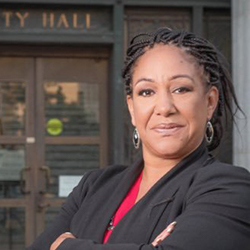 Cat Brooks, Executive Director of the Justice Teams Network, has been engaged in the struggle against state violence for well over a decade. After losing her father at the age of eight to the Nevada Penitentiary System, she continued to witness the ways in which law enforcement brutalized Black and Brown communities. In 2009, after years of organizing around a myriad of social justice issues, Cat became deeply involved in the struggle for justice for Oscar Grant which unbeknownst to her would change her life forever. Since that time, Cat has worked on the frontlines of resisting state violence, including co-founding The Anti Police-Terror Project whose mission is to rapidly respond to - and ultimately eradicate - police violence from communities of color. APTP has trained thousands of people in their rapid response model which is currently being implemented across the state of California and the country.