Shackled to Debt: Criminal Justice Financial Obligations and the Barriers to Re-entry They Create

Shackled to Debt: Criminal Justice Financial Obligations and the Barriers to Re-entry They Create

The authors find that CJFOs are imposed at multiple stages of justice involvement, generating complexities that are difficult to navigate for both individuals and system actors alike. Additionally, financial sanctions are usually imposed without regard for individuals’ ability to pay, and yet failure to pay can trigger additional monetary and criminal sanctions. This means that relatively minor initial infractions can result in large debt accrual and escalating involvement in criminal justice systems.

Current systems of criminal justice financial obligations can also generate perverse incentives for justice-involved individuals - who may forego pursuing long-term sustainability in favor of being able to pay off their criminal justice debt quickly – and for system actors. Probation and parole officers, for example, may find that their ability to foster trust and positive behavior change in the lives of those they supervise is compromised by the role of debt collector.

Consequences of criminal justice debt can undermine post-incarceration re-entry goals such as finding stable housing, transportation and employment. Failure to achieve these goals is costly not only for justice-involved individuals, but also in terms of public safety outcomes.

To address the complexity, perverse incentives, and individual and social costs of CJFOs, the report presents recommendations in seven areas: (1) Factor in ability to pay when assessing CJFOs; (2) Eliminate “poverty penalties” (e.g. interest, application fees for payment plans, late fees, incarceration for failure to meet payments); (3) Implement alternatives to monetary sanctions where appropriate (i.e. community service); (4) Provide amnesty for people currently in debt due to CJFOs; (5) Deposit any CJFOs that are collected into a trust fund for the express purpose of rehabilitation for people under supervision; (6) Establish an independent commission in each jurisdiction to evaluate the consequences of CJFOs; and (7) Relieve probation, parole, and police officers of the responsibility of collecting debt.

Praise for Shackled to Debt:

Karin D. Martin is an Assistant Professor of Public Management at John Jay College of Criminal Justice and The Graduate Center, City University of New York; Sandra Susan Smith is an Associate Professor of Sociology at the University of California, Berkeley; and Wendy Still is Chief Probation Officer of Alameda County, California. 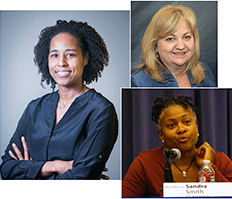 "Overburdening supervised individuals with fees and fines that they have no chance of repaying backs them into a corner, and pushes the criminal justice system closer to failure instead of success. Probation officers need to first be public safety agents, not revenue collectors." - Doug Burris, Chief Probation Officer, United States District Court, The Eastern District of Missouri, Probation 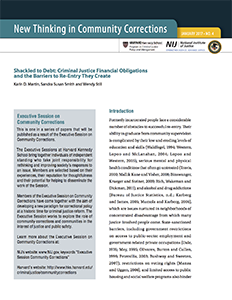