Report:  Reducing Recidivism and Improving Other Outcomes for Young Adults in the Juvenile and Adult Criminal Justice Systems by the Council of State Governments (CSG) Justice Center (November 2015)

Incarceration, Inequality, and Imagining Alternatives by Bruce Western in The ANNALS of the American Academy of Political and Social Science (January 2014)

Mass Incarceration, Macrosociology, and the Poor by Bruce Western and Christopher Muller in The ANNALS of the American Academy of Political and Social Science (May 2013)

Locked Up, Locked Out: The Social Costs of Incarceration by Bruce Western in Reason (July 2011)

Paternal Incarceration and Support for Children in Fragile Families by Amanda Geller, Irwin Garfunkel, and Bruce Western in Demography (February 2011)

Decriminalizing Poverty by Bruce Western in The Nation (2010)

Investigating Prisoner Reentry: The Impact of Conviction Status on the Employment Prospects of Young Men by Devah Pager and Bruce Western, funded by the U.S. Department of Justice (2009)

From Prison to Work: A Proposal for a National Prisoner Reentry Program by Bruce Western from The Hamilton Project and The Brookings Institution (2008)

Marked: Race, Crime, and Finding Work in an Era of Mass Incarceration by Devah Pager from University of Chicago Press (2008)

Punishment and Inequality in America by Bruce Western from Russell Sage Foundation (2006)
Winner of the 2008 Michael J. Hindelang Book Award from the American Society of Criminology and 2007 Albert J. Reiss Distinguished Scholarship Award 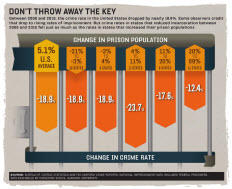 Chart:  Don't Throw Away the Key, Change in Prison Population