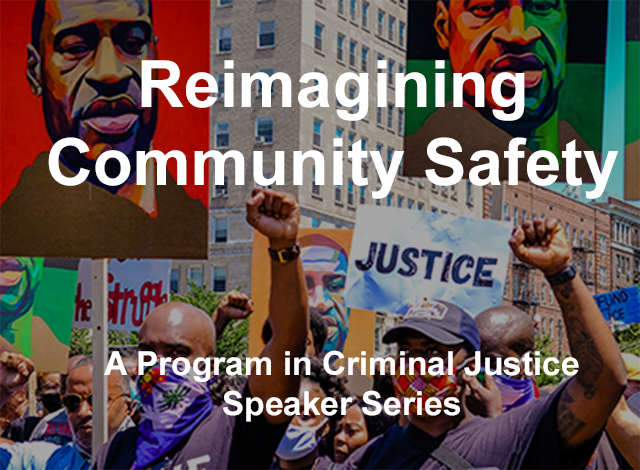 Following the murder of George Floyd by Minneapolis police, protesters across the nation and the globe have marched to end police brutality. For some this has meant reimagining policing, with an eye toward achieving racial equity in police treatment and in penal system outcomes. For others this has meant reimagining public safety, i.e., considering the various ways that society might achieve safe and secure neighborhoods with police as merely one of a number of institutions engaged in this broader project. For yet another group, community safety is the object of reimaginings. Here the effort is to center the needs and wants of residents of specific communities in efforts to reduce crime and the harms that come with it, to make wrongdoers accountable, and to bring about healing so that the community and its members can be made whole. To varying degrees, each of these has captured the imagination of the broader public. It is unclear, however, how each set of reimaginings might be realized, especially in low-income communities of color where police and policing practices are arguably as much the source of deep and long standing harms as the source of protection and support.To gain traction on this most urgent of issues, the Program in Criminal Justice is organizing a speaker series on this theme. Reimagining Community Safety: A Program in Criminal Justice Speaker Series is an effort to better understand from the perspective of practitioners, policymakers, community leaders and activists, and academics 1) the long-standing nature and roots of this seemingly intractable problem, 2) why reforms have generally failed to achieve desired results, 3) what a different approach to community safety looks like, 4) what ongoing efforts in communities across the country hold promise for real and sustained change, and 5) what considerations should guide our evaluations of these efforts. Taken together, the speakers’ contributions represent a kind of narrative arc, ending primarily with community leaders and activists pointing the way to real and sustained change. Beginning September 23rd, Reimagining Community Safety: A Program in Criminal Justice Speaker Series will be held on Wednesdays from 4:30pm to 5:45pm (Eastern). The fall lineup includes the following individuals who have each informed policy and/or academic debates on this topic.The series is organized and will by moderated by:Sandra Susan Smith, Daniel & Florence Guggenheim Professor of Criminal Justice and Faculty Director of the Program in Criminal Justice Policy and Management at Harvard Kennedy School and Carol K. Pforzheimer Professor at the Radcliffe InstituteChristopher Winship, Diker-Tishman Professor of Sociology, Harvard University and a member of the senior faculty at the Harvard Kennedy School of GovernmentThe first speaker in the series will be on Wednesday, September 23 at 4:30pm:A discussion with Ronald Davis, Former Director of the USDOJ Office of Community Oriented Policing Services (COPS Office); currently Partner of 21CP Solutions, an organization that seeks to empower communities across the country to develop and implement equitable and integrity-driven public safety grounded in trust and strong relationships.

POSTPONED: Public Education in the Time of Covid: Interventions and Inequities