STS Circle: The Law of the Land: Charting Exclusion Zones at the Limits of Argentina's Soybean Futures 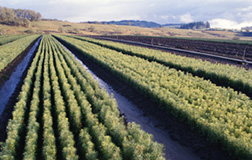 Lunch is provided if you RSVP.
Please RSVP via our online form before Thursday afternoon, March 28th.

Abstract As an early adopter and powerful global advocate of GMOs, it is perhaps no wonder that Argentina’s GM soy fields have become home to some of the strangest side effects of agricultural biotechnology over the past two decades. On the outskirts of Argentina’s second largest city, residents of Ituzaingó Anexo “started getting sick in new ways.” Further west in San Luis province, vast new rivers appeared overnight. Partly driving the transformation of Argentina’s agricultural model was a neo-socialist political experiment known as Kirchnerism that relied on the capital and scientific expertise afforded by the GM soybean industry. In this talk, I explore what happened when these experiments began to fail; when concerns about the soy boom rose to the level of national debate and the grand political experiment that is Kirchnerism succumbed to its own divisive politics. The two case studies I discuss focus on the various ways communities have discovered and responded to the so-called unintended consequences of this agricultural production model. In Ituzaingó Anexo and San Luis, citizens have imagined and brought to fruition a new way of ordering the land through a first generation of land use laws in the hopes of restoring a political order capable of delivering justice. With what I call topographies of repair, I discuss what happens when the co-production of agricultural biotechnology and justice is brought into high relief by two communities’ at the frontlines of imagining how to rebuild a democratic state from the land up.

Bio Geneva Smith is a Visiting Research Fellow with Harvard’s Program on Science, Technology and Society and PhD Fellow with Latin American and Iberian Institute at the University of New Mexico where she is also a PhD candidate in the Department of Anthropology. She holds a Master’s degree in Global Policy Studies with a concentration in Security, Law and Diplomacy from the LBJ School of Public Affairs at The University of Texas at Austin. Geneva recently completed her doctoral fieldwork at three field sites in Argentina where she ethnographically studied the land as a site of nation-building. At each site, she worked with communities in the process of understanding and devising strategies to survive during the soy boom through their engagement with municipal and provincial regulation. She is currently writing her dissertation entitled “‘Where the Land Ends’ Knowing and Governing the Limits of Argentina’s Soy Boom” that examines how the development of a first generation of leys de suelos (land use laws) reveal the ways unanswered demands for justice tend to bring historical violence into the present and how citizens’ persistent, at times unlikely, belief in the state’s capacity to deliver justice is at the core of reconstituting a democratic Argentina.