STS Circle: Repossessing the Wilderness: New Deal Sciences in the Eastern Band of the Cherokee Nation 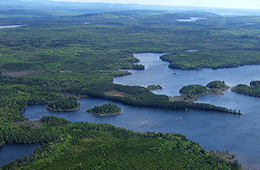 Lunch is provided if you RSVP.
Please RSVP via our online form before Thursday afternoon, March 21st.

Abstract Between 1933 and 1942, the Civilian Conservation Corps--Indian Division (CCC--ID) at the Qualla Boundary employed Eastern Band citizens in forestry, infrastructure development, and public health projects geared toward the stabilization and preservation of both Cherokee people and lands. In this paper, I trace how the CCC—ID mobilized what I term “frontier sciences” to reconstitute sites of uniquely settler American knowledge production in the wake of Progressive era economic, political, and environmental collapses. It was a project born of a scientized imperialist nostalgia that refused to accept the loss of the object of its mourning the epistemically and technologically productive experience of transgressive encounter, or the frontier. At the same time, the CCC—ID, as a program carried out by the hands of Eastern Band employees, fractured that larger New Deal project, making use of these initiatives for their own political ends. The result was an epistemically and geographically stratified Qualla Boundary, both a frontier and a boundary conceived through the material production of Native science.