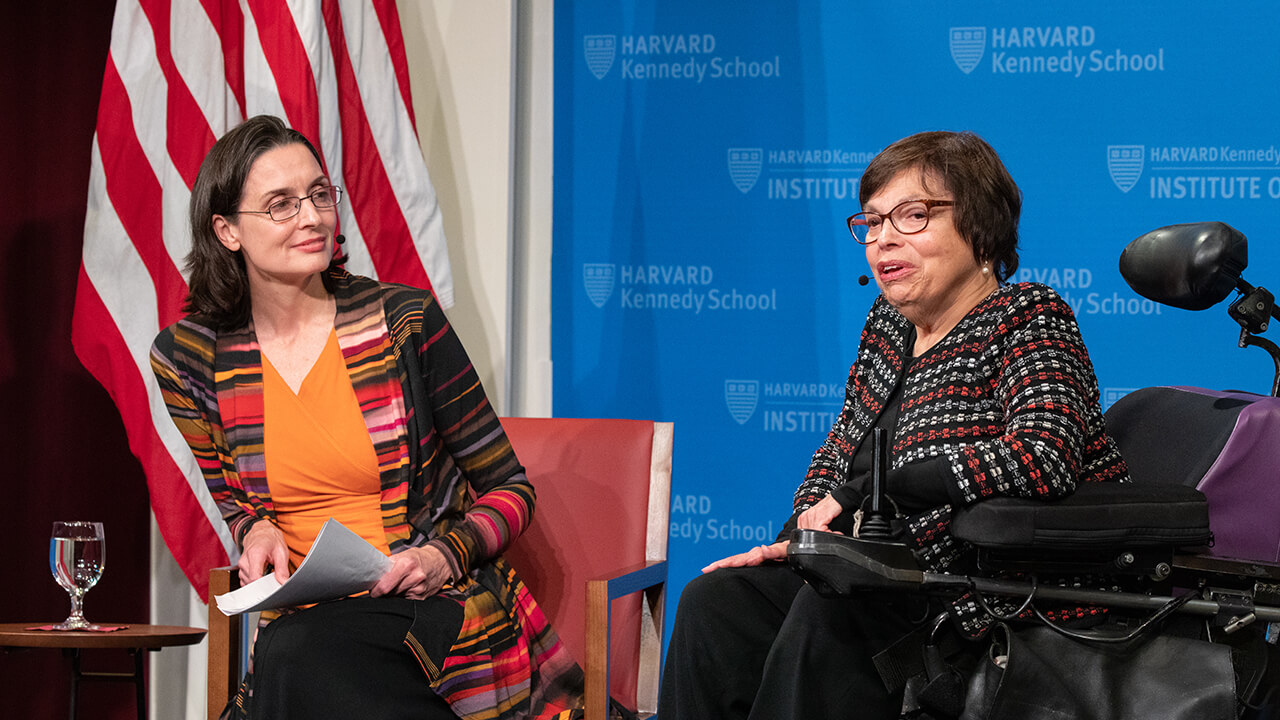 Disability rights still have a long way to go

Disability rights activist Judith Heumann, delivering the 2019 Gustav Pollak Lecture, says much has been done, but there’s a need to “ramp up the knowledge people need.”

Disability rights have come a long way since she and other advocates in wheelchairs shut down Madison Avenue to protest Richard Nixon’s 1972 veto of the Rehabilitation Act, but former U.S. Assistant Secretary of Education Judith Heumann believes members of the movement are probably still too polite.

“I think disability is still pretty invisible,” said Heumann, a longtime international disability rights activist who delivered the 2019 Gustav Pollak Lecture at the JFK Forum on Tuesday. “And I think in part it’s because the [ disability rights] community is not as demanding as other communities are. There are difficult issues that still need to be discussed, and I think they have to be discussed.”

Heumann, whose accomplishments include helping to push through groundbreaking federal legislation ensuring disability rights, was introduced by Sara Minkara MPP 2014, a fellow at the Carr Center for Human Rights Policy and founder of the nonprofit group Empowerment Through Integration. Minkara, who lost her sight as a young girl, called Heumann “an icon and a force to be reckoned with.”

“I’ve met with so many leaders—whether it’s ambassadors, senators, heads of state, whoever—who say Judy is the person that impacted their lives and helped them understand and see the value of inclusion of people with disabilities,” said Minkara, who was named to Forbes’ 2017 list of “30 under 30 Social Entrepreneurs.”

The lecture was co-sponsored by the Institute of Politics and the Women and Public Policy Program (WAPPP) at Harvard Kennedy School. WAPPP Co-director Hannah Riley Bowles, who moderated the event, asked about Heumann’s influences on her approach to activism over the decades. One of her surprising answers: television.

“Television had a major impact on my generation, because we were able to see things that were going on in the area of the civil rights movement,” Heumann said. “And we were able to see that people who were so committed to changing society were risking their lives in very serious ways. And I think, for myself and for many friends, we were really inspired by that.”

But Heumann, who contracted polio as a toddler and has used a wheelchair most of her life, said she and other disability activists were also “really discouraged” that both the Civil Rights Act of 1964 and the Voting Rights Act of 1965 failed to specifically protect disabled people. Nevertheless, in 1969 she sued New York City school officials for refusing to give her a teaching license; the case settled and she became the first New York City teacher to use a wheelchair.

Three years later, she became a full-time activist. In 1975, when she was working on Capitol Hill as a legislative assistant in the U.S. Senate, there were still at least a million disabled children in the United States not attending school. One major hurdle to changing attitudes, she said, was simply getting people to accept the idea that it was wrong to treat people with disabilities differently from everyone else.

In 1993, Heumann was asked if she wanted to join the Clinton administration. She agreed, she said, but only on the condition that she could be an assistant secretary of education. Even in government, she maintained her aggressive attitude toward pushing change, calling her herself an “advo-crat.”

“A lot of what we had to do while we were there was challenge people’s thinking,” she said.

With next year marking the 30th anniversary of the Americans with Disabilities Act , Heumann said that there has been significant progress made over the last several decades, “especially in the built environment and transportation” and also in employment.

But she also called it “inexcusable” that there still aren’t more educational resources to help employers and others determine when people with disabilities are being discriminated against. Too many people know they’ve mishandled a situation with a disabled person, but “don’t really know what to do next,” she said.

“Who’s out there really helping them know what to do next?” Heumann asked. “I would say that’s one of the biggest deficits we have to address—really ramping up the knowledge that people need.”

Faith on the front line: From Ferguson to Flint, the role religious communities play in times of social activism and division