Faith on the front line: From Ferguson to Flint, the role religious communities play in times of social activism and division | Harvard Kennedy School
Skip to main content 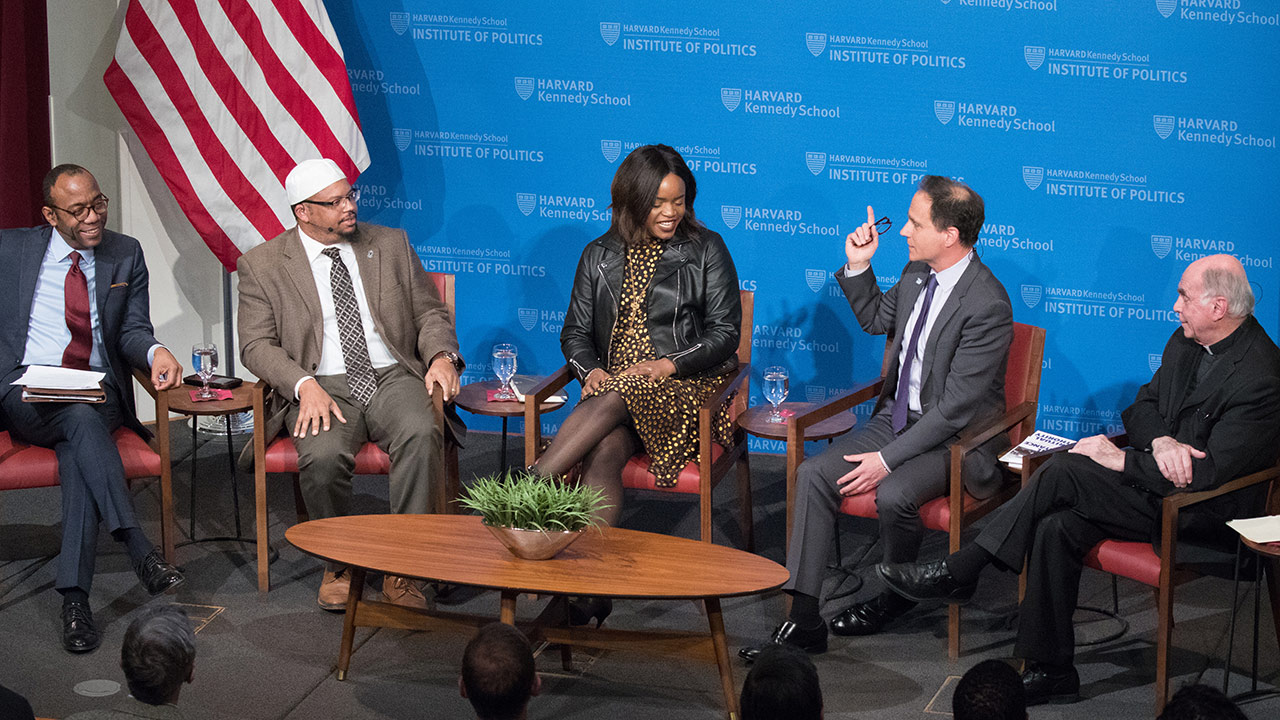 Faith on the front line: From Ferguson to Flint, the role religious communities play in times of social activism and division

A panel of religious leaders and activists discuss the role that faith can play in social activism.

What role should faith communities and religious leaders play in ministering to both individuals and society, and how can those communities be inclusive to all? Those were among the questions asked as religious and political leaders discussed the intersection of faith and activism at the John F. Kennedy Jr. Forum at Harvard Kennedy School. Cornell Brooks, Professor of the Practice of Public Leadership and Social Justice, an ordained minister and former director of the NAACP, moderated a panel that included: Harvard University Chaplain Khalil Abdur-Rashid; Father J. Bryan Hehir, the Parker Gilbert Montgomery Professor of the Practice of Religion and Public Life; Brittany Packnett, vice president of National Community Alliances and a Fall 2018 Institute of Politics Resident Fellow; Rabbi Jonah Pesner, director of the Religious Action Center of Reform Judaism.

“Our history has been marked by great leaders and great movements from the faith community who have inspired, have engaged, have consoled. …This is an important topic for these times especially.”

“We are holding this conversation, this convening in the midst of a Twitter age of social justice. This is a moment of generationally unprecedented activism. And whether you are talking about civil disobedience campaigns from Ferguson to Flint, from Philadelphia to Chicago … we find people of conscience and conviction and communities of faith on the front lines, marching, demonstrating, protesting, getting arrested—wearing their theology, their social ethics, if you will, on their sleeves, on their hearts, and on their bodies.”

“[During the protests following the killing of Michael Brown in Ferguson, Missouri] Pastor Tracy Blackman was confused as to why young people would not come into the church for organizing meetings and other things. I said part of the issue here is that you keep trying to lead, and while I understand that is what you have to do every single day, every single week with your congregation, young people are already leading, so all you have to do is follow. … At a march that happened later on in the week, Pastor Tracy got on a bullhorn and said, ‘I want to apologize to you. We thought that you needed to come to the church, but actually we needed to bring the church to you.’”

“If you have a young person who has been killed on the streets of Boston, killed in Roxbury, you’ve got to be there for that family, but then you have to ask the question, why are there so many killings? … You have to bury the dead with sensitivity, support the family, and then on the next day, when the funeral is over, you have to deal with the wider social system that produces [those murders]. The church, the synagogue, and the mosque have to measure their vision all the time between sensitivity to the person and strength in dealing with social structures and social injustice.”

“I teach this all the time—do you want to be a chaplain to the regime or a prophet to the resistance? The comforting of people and the consoling of people is the easy space for [religious leaders] to be in. The prophetic place is the more uncomfortable place for us.”

“We have to show up when it is not our issue. We tend to show up when it’s our issue or an issue that resonates with us for some matter of convenience. But we have to do more to show up on universal issues. Right is right and wrong is wrong, and when we do that, when we stand for what is right … we stand on a platform of principle. And when we stand on a platform of principle, that has the ability to unite people in many, many ways.”

Moral Resistance: When Faith & Activism Meet in the Streets