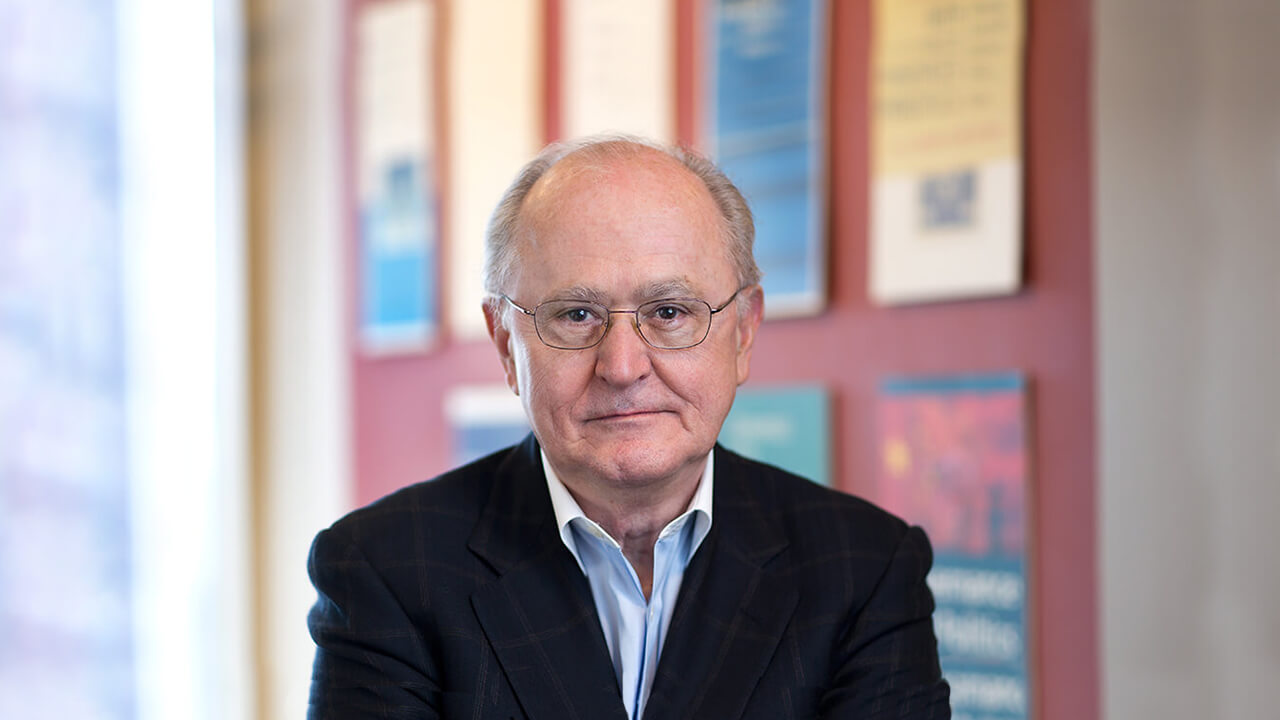 An influential scholar, Ruggie authored an international framework that helped bring the practice of corporate responsibility into the mainstream.

John Ruggie, the Berthold Beitz Research Professor in Human Rights and International Affairs at Harvard Kennedy School and the architect of an authoritative global standard on business and human rights, passed away on Sept. 16. He was 76.

A political scientist, Ruggie’s academic work in the field of international relations focused on the impact of economic and other forms of globalization on global rule-making and the emergence of new rule-makers. He helped refine and advance the constructivist approach to international relations, which emphasizes the development of norms, identities, and ideational power, and then demonstrated its value in his work at the United Nations. His academic stature was confirmed by surveys published in Foreign Policy, which named him as one of the 25 most influential international relations scholars in the United States and Canada. 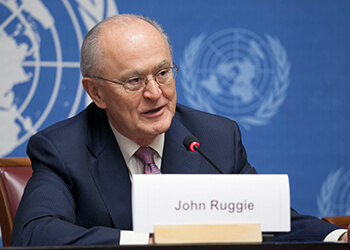 He also worked tirelessly on the application of his work to complex global governance challenges. From 1997 to 2001, he served as the UN assistant secretary general for planning under Secretary-General Kofi Annan, playing a key role in institutional reform and renewal at the UN, for which the United Nations was awarded the Nobel Peace Prize in 2001. He was also instrumental in establishing the UN Global Compact and the Millennium Development Goals (MDGs). Today, the UN Global Compact is the world’s largest corporate sustainability initiative, directly involving more than 14,000 companies in some 160 countries and the MDGs have been expanded to the Sustainable Development Goals.

In 2005, he was appointed as the UN secretary-general’s special representative on business and human rights, authoring the UN Guiding Principles on Business and Human Rights following a six-year process of research, pilot projects and consultations around the world. After being unanimously endorsed by the UN Human Rights Council in 2011, the Guiding Principles have become the authoritative global standard on business and human rights, increasingly integrated into national legislation and voluntary corporate responsibility frameworks.

On the 10th anniversary of the Ruggie Principles, as they are often called, he described their simple but powerful legacy: “[They] have helped turn the idea that companies are responsible for preventing and addressing adverse impacts of their business on people’s basic dignity and equality into a mainstream proposition—thereby helping to provide a path beyond shareholder primacy toward multi-fiduciary obligations.”

“John was a monumental figure on the world stage and embodied the very essence of the Kennedy School mission.”

Harvard Kennedy School Dean Doug Elmendorf called Ruggie “a colleague, teacher, and friend to so many people here and around the world.

“His loss leaves a huge hole in the social fabric of the Kennedy School and of the world,” Elmendorf said.

Others paid tribute to his academic and public policy legacy and his humanity and personal warmth.

“He combined a superb intellect and strong principles with great kindness and compassion and a deep commitment to achieving practical progress in global efforts to respect human rights,” said Jane Nelson, director of the Kennedy School’s Corporate Responsibility Initiative, which Ruggie led. “He mentored, advised, and inspired thousands of students, as well as policy makers and practitioners from around the world, and touched the lives of many others.”

Jeffry Frieden, Stanfield Professor of International Peace and chair of the department of government at Harvard University, was one such student--Ruggie was his dissertation adviser at Columbia University. “Both in that capacity and in the decades since then, he was a model of academic clarity and contemporary relevance,” Frieden said. “As a scholar, he insisted on theoretical clarity and rigor. As a participant in policy debates, he brought his sharp mind to bear on some of the world's most difficult problems in a way that was both pragmatic and innovative. The world will miss him, as will I.”

Kathryn Sikkink, Ryan Family Professor at HKS, was another of Ruggie's many mentees. “He was my dissertation advisor, mentor, and friend,” she said. “I know of no other international relations scholar who made such original intellectual contributions to theory at the same time as being a pathbreaking actor in global governance.”

Former HKS Dean David Ellwood said: “John was a monumental figure on the world stage and embodied the very essence of the Kennedy School mission. He was a pragmatic idealist, who worked tirelessly.”

Former Dean Joe Nye added: “One of my proudest achievements as dean was to recruit John to join the Kennedy School. We are all enriched by his life and diminished by his loss.”

“John received many well-deserved honors throughout his career, but I sometimes think his gifts and accomplishments should have been celebrated even more widely than they were,” Stephen Walt, Robert and Renee Belfer Professor of International Relations, wrote in a remembrance of Ruggie in Foreign Policy. It is one thing for an academic to leave their mark in the policy world by serving in government in a powerful country like the United States, with vast capabilities and leverage to bring to bear on difficult problems. John’s policy achievements were of a different nature and arguably far more impressive. With scant hard power at his disposal, he had to conjure influence and impact out of thin air, through the power of his ideas and his deep appreciation for the nuances of global policy formation. That he did so successfully is both a testimony to his many gifts and his commitment to building a better world, and his work provides a textbook illustration of how the right people can produce positive change even in unlikely circumstances.”

“John was a good man of vision, energy and integrity,” said William Hogan, Raymond Plank Research Professor of Global Energy Policy. “He worked tirelessly to improve the world, taking on challenges where he knew he might fail but where his success surprised everyone.  John was both modest and inspirational, the best among us.”

Ruggie was a former director of the Mossavar-Rahmani Center for Business and Government. John Haigh, M-RCGB co-director and lecturer in public policy, said: “John was a giant in the field of international relations and identifying and refining the role of business and addressing humanitarian and social issues. He will be very missed.”

“John was a person of principle and practicality,” added Larry Summers, Weil director of M-RCBG and Charles W. Eliot University Professor. “He made the world a better place by helping to harness corporate power into the pursuit of a more humane world. The keenness of his intellect was matched only by the generosity of his spirit. The Kennedy School, the M-RCBG, and I will mourn his passing and will miss him very much in the years ahead.”

Ruggie is survived by his wife, Mary, and his son, Andreas.

Additional tributes from leaders in the field of business and human rights can be found here.