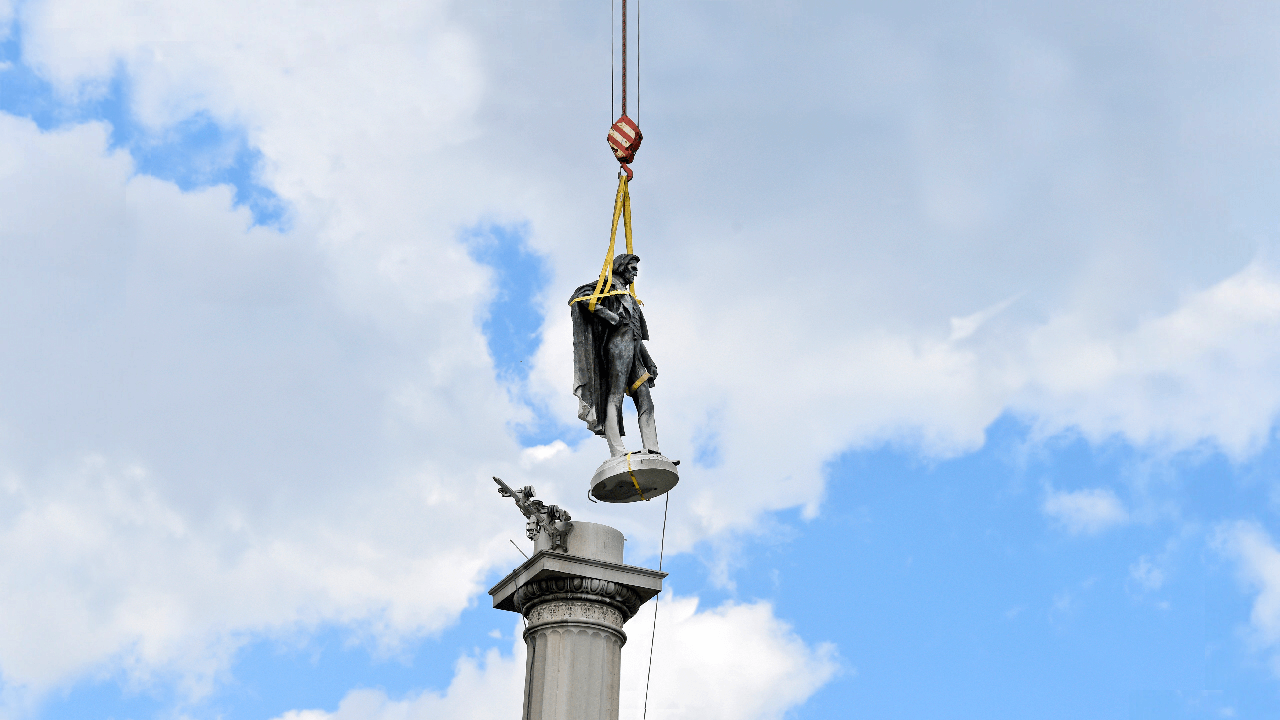 Cities across the United States, particularly in the South, are struggling with the legacies of their Confederate past, including monuments that have sparked renewed protest and calls for removal in recent years—most recently after the nationwide protests sparked by the killings of George Floyd, Ahmaud Arbery, and Breonna Taylor this spring.

But how mayors deal with monuments that represent past injustice can be politically challenging and controversial.

A new teaching case, “Reckoning with History: Confederate Monuments in American Cities,” focuses on how mayors in three cities—Baltimore, Maryland; Lexington, Kentucky; and Charleston, South Carolina—grappled with the removal of Confederate monuments and flags in their public parks and plazas in the aftermath of hate crimes in Charleston in 2015 and Charlottesville, Virginia in 2017.

The new resource, part of a free, publicly accessible collection of teaching materials on moral leadership, is designed to help leaders evaluate challenges with highly sensitive moral dimensions. Featuring an educator guide, practitioner guide, slides, and an epilogue, the teaching case can be used in classrooms, city halls, and board rooms to spark conversations not only about Confederate monument removal but about broader questions about race, history, and moral leadership.

Moore spoke with Leary about the case. Read the interview below (edited for length and clarity).

Q: What is this case about?

It’s about the complexities of American history and of the continuing challenges that history causes in present-day public leadership. On the one hand, it's a case about monuments—Confederate monuments that somehow were still sitting in very prominent places in very visible areas of cities. These monuments were essentially glorifying Confederate leaders who stood for a secessionist state and whose values are not compatible with the values that most of us have now.

On the other hand, it’s a case about the mayors who were leading these cities and inherited these monuments. For some that was not an issue that appeared on their docket anywhere, but because of other contemporaneous events—particularly the massacre at the Emanuel African Methodist Episcopal Church in Charleston and the murder of Heather Heyer in Charlottesville—it became an issue that inflamed communities. So suddenly mayors were faced with the choice: What do I do with these statues? Who do I listen to? The case is about the leadership choices, leadership narratives, and leadership implications of confronting the past in the present in order to create the kind of future communities that these mayors wanted to bring about.

Q: Who is this case for?

I think it that can be used in a couple of different ways and by different constituencies. The question of what to do with our history—what to do with the parts of our history that are inconvenient, that are noxious, but still have implications in the present—is an issue that's of concern to everybody.

If you are interested in public leadership, if you want to know how to lead cities and how to manage complex, high-emotion issues, this case can help you to think through the steps that you would need to take. If you are a city official trying to lead your team in a planning exercise to think about what choices others have made and what creative choices your team might be able to imagine, this would be a case for you, as well.

I also think that the issue of monuments to tyrants or to bad actors in history is not a U.S. phenomenon alone. It's a case that can also be used very constructively in a variety of global contexts. It could be that using this case in an international context with international students would bring out points of contrast and a range of choices and possibilities that we may not even see in our U.S.-based classrooms.

“Suddenly mayors were faced with the choice: What do I do with these statues? Who do I listen to?”

Q: What do you hope that students and other users of the case will learn from reading and talking about it?

I think the first point is that those monuments had been sitting in the courtyard for a while—maybe invisible to many in that community, maybe largely invisible to the leaders in those communities, but highly visible to other community members. I hope that people will appreciate that while we may live in the same place, particular populations and communities see different elements of history in different ways.

Second, no matter what your personal moral choice would be, when you're a public official—whether put in that position by ballot or by appointment—it's not only about your preferences and your morality, it's also about guiding your community to make moral choices. You have a right to advocate for a particular choice. But you also have to take into consideration and bring into dialogue a whole range of voices that are not going to be perfectly aligned with one another. The mayors in this case had to sponsor a public process, and they did better or worse depending on the city.

The last thing that you could take away from a case like this is that these monuments were not just incidentally constructed. They were constructed with an agenda. And that agenda meant that even if city leaders wanted to move the monuments, they may not have had the power or freedom to do so, because the people who had erected that monument also had assembled structures to ensure its longevity. Even if the leader and the community wish to remove a monument, in some cases the law, which public leaders are also sworn to uphold, says they can't. These are the kinds of choices and the kinds of choice points that mayors must not only navigate, but also explain to the larger community. This is why this is a case about managing moral challenges in conversation, in community, and in dialogue.

Q: What makes this a case about moral leadership?

The relevant history is a very particular one of human bondage, about a government and so-called heroes of that government, that expressly believed in human bondage and slavery. That takes us into the realm of morality—of what is fair and right and just in the eyes of the law, in the eyes of history, and in human hearts. It's a moral case because you have constituencies pleading for recognition of their moral standing as fellow human beings.

Q: Is it important for city leaders to address racist symbols when there are so many urgent policy questions that affect racial equity? If so, why?

There will always be more on the docket for any mayor to address than they are capable of addressing. And when we think about the urgency of racial equity, of economic needs right now—particularly in the COVID-19 response and recovery process, at this time when we can all see what injustice looks like and how bias operates in almost every public sector practice that we can think of—it’s reasonable to ask, why monuments?

I think that a monument is more than just an issue to be resolved because it is about the history that brought us to this point, and it's about honor. We tend not to put up monuments to those we abhor, so to the extent that a monument is in an honored, revered public place, it is raising for consideration that the values that monument represents are values that are still enshrined in that city's practices. And when you take down the monument and say, “I'm no longer going to valorize biased, racist practices,” I think there is a kind of relief that creates a platform for people inside and outside city hall to see where we can begin to make tangible progress in housing, healthcare access, transportation, etc.

Q: What, if anything, in this case surprised you about how the mayors responded to the challenge?

It’s surprising to my 21st-century ear that there would still be a need to be careful about the proponents of the monuments, to avoid offending those who are making the claim that this is just a neutral representation of history and heritage, rather than an anachronistic celebration of explicitly racist history. I'm not surprised by it in any kind of academic or scholarly way. But as a person, it seems so antithetical to the future that we talk about being committed to building together. I think it's a surprise that's worth each of us reckoning with.

Q: How do you think that more recent events have changed the landscape for city leaders in terms of how they can or should respond to the legacy and ongoing harm of white supremacy in America?

I think for a long time, when there have been events of horrific injustice, for many constituencies they have felt like the problem’s “over there,” not a problem in my community or a problem for me. I think the killing of George Floyd was an inflection point for this country. And it's hard to know why, because there have been so many officer-involved killings of unarmed Black people over a very long period. We know that from the Say Her Name campaign and all the work that's been done by Black Lives Matter activists. I don't know why George Floyd was the flashpoint. Speculatively, I wonder if it had to do with us all being at home, watching our screens and witnessing again and again and again a man being murdered—slowly, via suffocation—at a time when we're all attuned to the horrors of losing breath because of COVID-19.

But whatever the reason, there was something about that moment where it seemed as though many people beyond those immediately affected started to say, "This is not my country. I don't recognize myself in this. And yet this happens so frequently. This is now our collective problem." I think that's what we've seen over the summer: the movement from this being a Black problem or a Black or brown community problem, or even a police problem, to the perception of this as a problem in all our communities. There seems to be a real recognition that racism is not just about individual bad actors. It's about a system that leads inexorably to these kinds of outcomes.

Now, what does this mean for city leaders? I think it means that they can put racial justice and racial equity on the agenda, and they can trust that there are going to be people who are listening to them and who are interested in living in a world in which there is much more equity. But achieving that equity is going to require concerted collective action by many different people.

Teaching mayors to lead through COVID-19

Bringing signature HKS teaching to remote learners all over the world