Running a large bike-sharing system is harder than running an urban transit system, contends Jay Walder MPP 1983. He ought to know. He's done both.

To be sure, the transit agencies carry millions of people a day, whereas on a good day 50,000 rides will be taken on Citi Bike, the New York City bike-sharing system which is the largest of 12 systems operated by Motivate in the United States, Canada, and Australia. However, Walder notes, “trains go from point A to point B, and then turn around and go back again.” In contrast, almost a quarter of a million trip combinations are possible on Citi Bike. “Trying to manage at this level of complexity is a real challenge,” observes Jules Flynn MPP 2007, Citi Bike’s general manager who met Walder in the late 2000s when they both worked at McKinsey & Company.

Despite these challenges, the number of cities across the world with bike-sharing systems has grown from 25 in 2006 to more than 600 today thanks to wireless and solar technologies that make it possible to site docking stations without digging up streets for wires and power lines. Walder, who regularly uses Citi Bike for commuting and work-related trips, says the systems are popular because “they are changing the way people are getting around and changing the way that they are experiencing the city.” 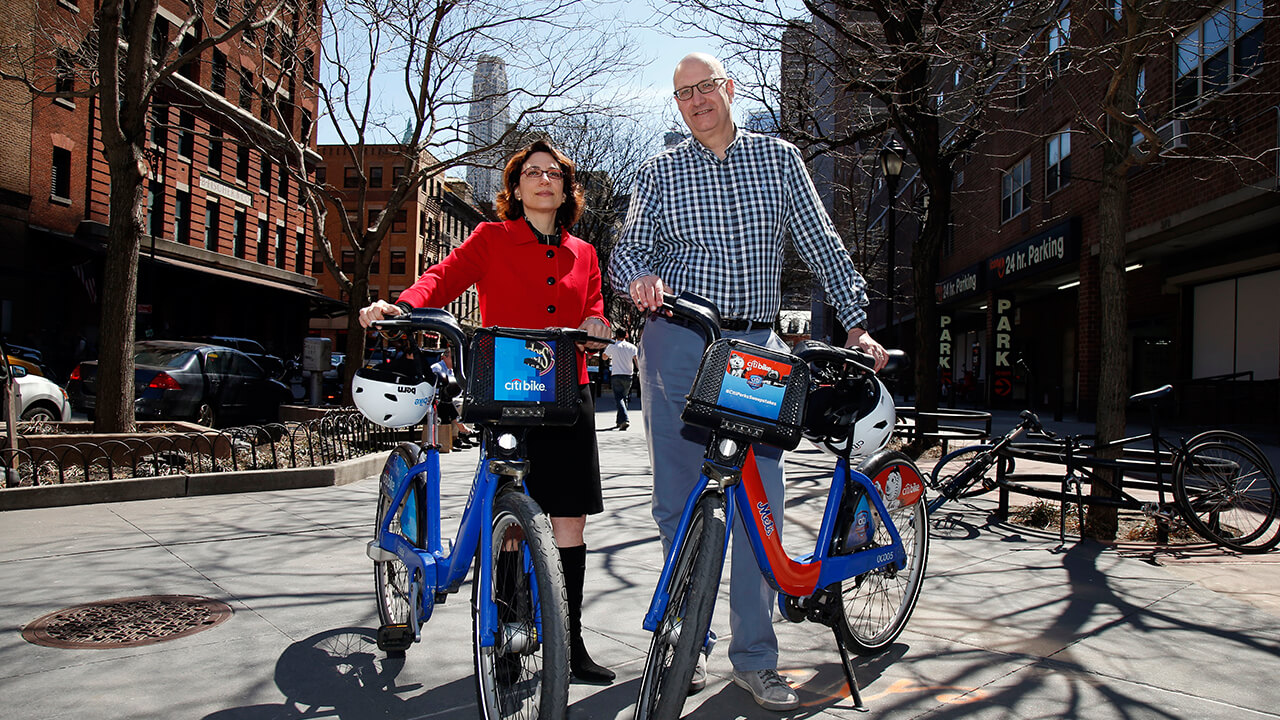 Achieving Walder’s expansive vision at Citi Bike is especially challenging because it is the largest bike-sharing system in the world that receives no public subsidy. Rather, drawing on analysis from a 2009 report prepared for NYC’s Department of City Planning by Kate Fillin-Yeh MPP 2006, the system covers its capital costs through sponsorships and its operating costs through annual membership fees and sales of daily and weekly passes. New York also followed Fillin-Yeh’s finding that usage would be greater if the city resisted the urge to spread stations over a large geographic area and instead built a dense (28 stations per square mile) network in a smaller area. Fillin-Yeh, who was hired by NYC’s Department of Transportation to develop the system, oversaw an extensive outreach program to site these stations, which were fiercely (but unsuccessfully) resisted by some residents and businesses, including the Plaza Hotel, near Central Park.

Launched to great fanfare in May 2013 by then NYC Mayor Michael Bloomberg, the system was named for corporate sponsor Citibank. It began with 6,000 bikes at 332 stations in Lower and Midtown Manhattan and parts of Brooklyn, with a promise to expand to 10,000 bikes at 600 stations in those boroughs and parts of Queens.

Initially the new system was popular. More than  8 million rides were taken on Citi Bikes in its first full year of operations. At the end of that year, more than 100,000 people had signed up for annual memberships, which cost $95 ($60 for residents of public housing).

But soon Citi Bike was in trouble. The software and hardware powering the stations were unreliable. Alta Bicycle Share, the system operator, could not keep up with the demand for bikes and docks at busy stations. A growing number of bikes were broken. Consequently, about half the users did not renew their memberships, and total membership began falling in June 2014. Walder, who was hired a few months later, says that many frustrated riders reached out to him. “I can’t tell you how many e-mails began with, ‘I love Citi Bike, but …,” says Walder, who adds that he soon learned that a key supplier had gone bankrupt and “we were a bike-share operator that didn’t even have a bicycle supplier.”

NYC DOT Commissioner Polly Trottenberg MPP 1992, who was appointed by Mayor Bill de Blasio when he took office in 2014, adds that it only “took a New York minute” for the system’s problems to become a high priority for the new mayor, who, in keeping with a campaign promise, had launched a major initiative to make streets safer for pedestrians and cyclists. Trottenberg, who had helped several cities start bike-sharing systems when she was a senior U.S. DOT official in the Obama administration, was especially concerned because she strongly supported the idea of bike-sharing: “You have a mode that is inexpensive for users, inexpensive for government, emits no carbon, uses no fossil fuels, and helps address the obesity epidemic. What’s not to like about it?”

Sensing an opportunity, in the fall of 2014 a group of investors that included CEOs of Related Companies, a prominent real estate firm, and Equinox, a high-end fitness company owned by Related, bought out Alta Bicycle Share, which also had contracts to operate publicly funded bike-sharing systems in Boston, Washington, DC, Chicago, Toronto, and several other cities.

The new owners, who later renamed the firm Motivate hired Walder, who was known for turning around troubled transit agencies and introducing innovative policies. As a senior executive at the MTA from 1983 to 1995, he had played a central role in revitalizing New York’s ailing transit system. He had developed and overseen the implementation of a seminal congestion pricing program in London that charged motorists for driving in the heart of the city and used the revenue to greatly expand bus service. Returning to New York in 2009, he had helped the MTA address major financial and management problems, and at MTR, which he left in mid-2014, he had led several major construction and development projects.

“There are very few people who go out and embrace innovation,” notes José Gómez-Ibáñez MPP 1972, PhD 1975, the Derek C. Bok Professor of Urban Planning and Public Policy, who has known Walder since he advised Walder’s Policy Analysis Exercise on how the MTA might respond to commuter van services on Staten Island. “Jay has done it since day one.” Trottenberg, who has known Walder since the late 1990s, when he was an HKS lecturer and she was a senior aide to Senator Daniel Patrick Moynihan (D-NY), adds, “We were very, very happy” when he took the job.

The new investors agreed to fund needed capital improvements and expansion by putting in additional funds and by getting CitiBank to extend its sponsorship agreement. Walder also convened weekly meetings focused on membership, which is supposed to cover the system’s operating costs. “Membership is a beast,” he says. “If we are providing a service that people want to be part of, then we are a successful organization.”

Motivate and the city also needed to agree on a new contract. Motivate wanted to raise the annual membership fee to $149 (while leaving the $60 rate for low-income New Yorkers in place). Trottenberg wanted Motivate to fix the operational problems and expand the system, particularly to less-affluent neighborhoods. However, since the system’s financial model is predicated on cross-subsidies, Motivate also needed to expand into upper-income areas such as Manhattan’s Upper West Side and Upper East Side.

Despite the potential pitfalls, the city and the new owners soon agreed on an ambitious expansion plan that will double the system’s size by 2017 and bring Citi Bike to parts of Queens, more of Brooklyn, and Manhattan as far north as Harlem. Reaching agreement was not too difficult, says Trottenberg, because “the beauty” of Citi Bike’s structure is that “the incentives of the system’s operators are aligned with the public’s interest.”

Though he did not know the exact magnitude of Citi Bike’s problems or exactly how to fix them, Walder immediately set a goal of addressing the major ones by summer, when ridership would increase. To achieve that goal, says Walder, “we had to make an incredible number of decisions in a very short period of time.”

Over the next few months, the company replaced Citi Bike’s troubled software and key parts at every station. Every bicycle was overhauled. Since it was hard to drive trucks full of bicycles through the city’s congested streets, the staff worked with some bicycle rickshaw drivers to develop nimble bicycle-powered trailers that now move about a third of the bikes that are redeployed each day. Motivate also rented spaces for extra bicycles in parking garages and other buildings (such as the Farley Post Office) that are close to key locations (like Penn Station) and began offering peak-period “valet services” at those locations. Moreover, key staff  members worked with bike designers and the system’s mechanics to design and build new bicycles for the system, which are now being assembled in Detroit. Thanks to these and other changes, customer service calls have dropped by 50 percent.

Having done all this work by Memorial Day, Citi Bike turned to its expansion plans. Over the next several months, it added 139 stations in Brooklyn, Manhattan, and Queens along with a separately funded but technically integrated 350-bike, 35-station system in Jersey City.

Citi Bike and others have been working to address cultural and social barriers to bike-sharing in many low-income communities. Tracey Capers, executive vice-president for programs and organizational development at the Bedford Stuyvesant Restoration Corporation, which is working with Citi Bike on this issue, says that although that neighborhood “is perfect for bike-sharing, several layers of fear” keep people from trying it. Some, she says, have never ridden a bicycle or haven’t ridden since they were kids, and some worry about riding near New York City drivers. And some see bike-sharing “as a sign and harbinger of gentrification” because they “don’t always see people like them on bikes” or in promotional materials. In response to all these concerns, Capers explains, “we’re trying to create a multi-pronged campaign effort to make it seem more ‘normal’ to be using Citi Bike.”

Fillin-Yeh, who is now bike-sharing program director for the National Association of City Transportation Officials, adds that in addition to resisting the temptation to reduce density as systems expand geographically, getting people in low-income communities to participate requires a multi-faceted strategy that includes making sure there is “someplace that’s safe to ride,” allowing low-income people to pay for membership on a monthly basis, and creating marketing campaigns that show riders who look like the people the systems are trying to attract. While Walder concurs with this assessment, he adds, “This is not a short climb. Cultural change is a hard thing.”

Despite these barriers, efforts to turn Citi Bike around are succeeding. Renewal rates have grown to 70 percent, and the system now has more than 97,000 members up from just over 80,000 in July 2015. And Citi Bike users took more than 10 million trips in 2015, an increase of 25 percent over 2014. “If I said 10 years ago that you’d have 10 million bike-share trips a year, you would have said I was insane,” observes Walder, adding, “The way the city is reacting to this is different than anything else I’ve ever done.”

This summer, Motivate has continued to expand the Citi Bike system. It also is bringing some of its new practices to Boston, Chicago, Washington, DC, and other places where it operates bike-sharing systems. In addition, Motivate is using the sponsorship model to expand bike-sharing in the San Francisco Bay Area from 700 to 7,000 bicycles and has inked a deal to sponsor a new bike-sharing system in Portland, Oregon.

These and other initiatives excite Walder, who, after using a bicycle to commute to the Kennedy School as a student, had never ridden a bicycle to work until he started at Motivate. “When you do a job like the MTA, you’re moving 9 or 10 million people a day,” he says. “The scale of that and the fact that it is so essential to the city is exhilarating. What you take out of bike-share is different. The exhilaration is that you really are revolutionizing the way people move around cities.”

David Luberoff MPA 1989 is a consultant on urban and transportation policy and the author of a case study “Reimagining and Reconfiguring New York City’s Streets,” published by the Project for Transforming Urban Transport at Harvard’s Graduate School of Design.