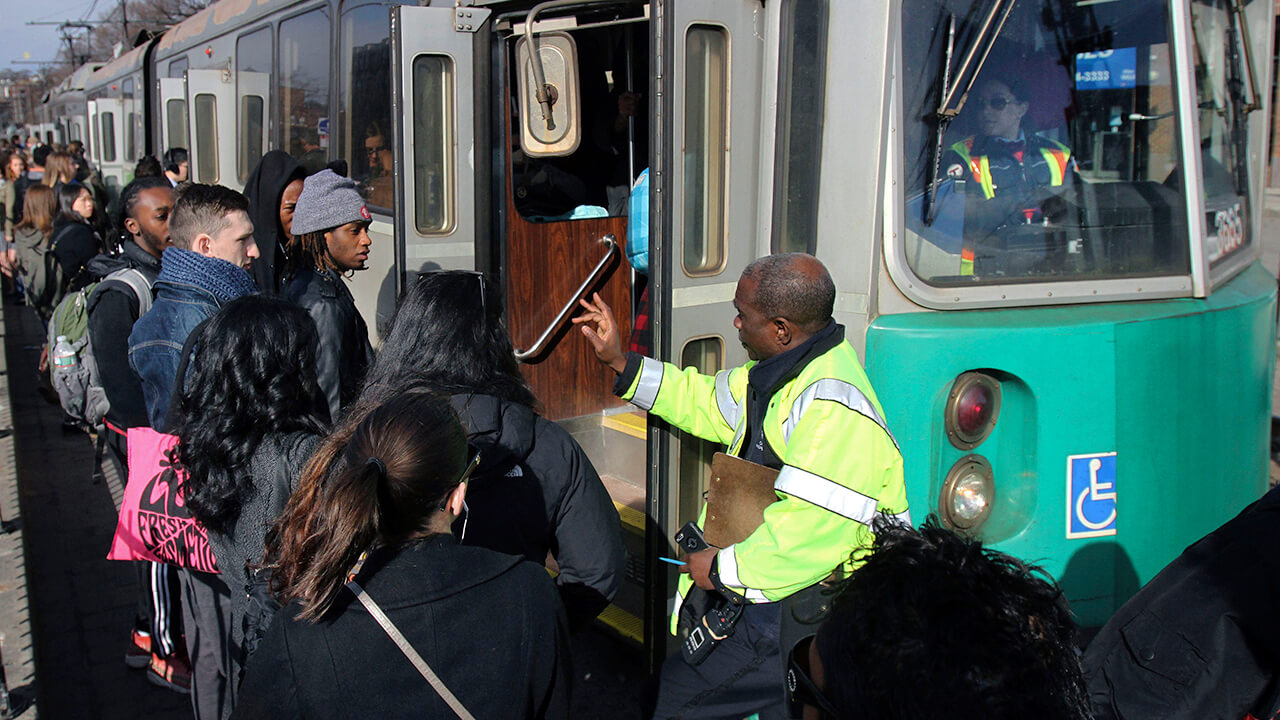 Should public transit be free? Experts weigh in on policy options

With outdated funding models and questions about whether riders care more about fares or service, opinions are divided on the future of public transportation.

With companies addressing how their employees will return to the office as the pandemic recedes, public transportation is a key part of the policy dialogue. Would free ridership keep autos off the road, a huge benefit for climate change? For the many essential workers who continued to commute during the pandemic, public transportation failed in many ways with interrupted and unreliable service.  How will free fares address this inequity? Is it even what commuters want?

As part of the Greater Boston Debate Series, sponsored by the Rappaport Institute for Greater Boston based at Harvard Kennedy School, panelists debated the merits of free ridership, a movement gaining momentum in American cities from Los Angeles to Kansas City to Worcester. In the upcoming mayoral race in Boston, nearly every candidate has expressed support of some form of fare elimination. But is the idea fiscally sustainable? Does it weaken transportation options, especially for low-wage earners who depend on it the most? The debate, featuring proponents and opponents of free ridership making their cases, was moderated by Monica Tibbits-Nutt, executive director of 128 Business Council, an organization that runs shuttle services in Massachusetts, and an advisory board member of the Rappaport Institute.

David Bragdon, executive director of TransitCenter, a foundation in New York that focuses on improving public transportation in U.S. cities, began by reframing the issue. “I’m going to pose a bigger question,” he said. “What can and should society do to help low-income people for whom the price of a transit ticket is an obstacle?” He suggested that local governments should provide targeted discounts to help alleviate poverty. “It’s similar to what we do with other public utilities in our society, whether it’s electric bills, water bills, or for that matter food—a human right where we have a SNAP program—or housing, where we have vouchers.”

He also pointed to rider surveys his foundation has conducted showing that transit patrons at every income level rank service, quality, and quantity over the fare price. And fare revenue provides the income to improve those services. In New York, 50 percent of fare revenue goes to infrastructure. In Chicago, it is 40 percent and in San Francisco, 62 percent. “If you tell a transit agency you’re going to take that revenue away, I can guarantee there is one thing that they can do: cut service,” Bragdon said. “That is just the math of it. But if riders are being helped by getting a free ticket to a really substandard product, I’d want to know that.”

“If riders are being helped by getting a free ticket to a really substandard product, I’d want to know that.”

Stacy Thompson, executive director of LivableStreets Alliance, an organization that advocates for equitable and safe public transportation in the Boston area, agreed with the need to expand and improve service, but questioned whether it will bring more people to public transportation. “Kansas City and Worcester, communities offering free ridership throughout the pandemic, demonstrated much more resilient ridership than their peer transit systems of similar size and demographics,” she noted.

Thompson pointed out fare collection can actually cost transit operations money and increase public safety incidents on transit vehicles. “We know that fare disputes are the leading cause of safety incidents for our operators and systems across the country,” she said. “A 12-month study statewide of free buses, such as a pilot in Massachusetts, can provide the data points needed to move this decision,” she added. “And we’re in a moment where we have federal funds for this kind of thing. We need to ask what kind of riders ride? I actually don’t think that free transit is going to move car drivers necessarily, but if it brings on more people who had an actual cost burden, that’s important. We need to ask how much money was saved in the agency by not collecting fares? We need to ask about the transit driver experience. Was it easier to do their job?”

Tibbits-Nutt summed up this important discussion by noting that while there is disagreement on the idea of free transit, the speakers agree that communities need to begin thinking about more progressive ways to fund our transit systems: “I think transit is always going to be vital to the health of our communities.”

You can listen to the complete debate here.  The Greater Boston Debate Series will resume in the fall.

—
Banner image: Riders board a "T" trolley car in Boston on the day when the Massachusetts Bay Transportation Authority let people ride for free as a goodwill gesture following a winter of disastrous breakdowns. Photo by Bill Sikes

The high cost of free roads: Q&A with Linda Bilmes and Stevie Olsen