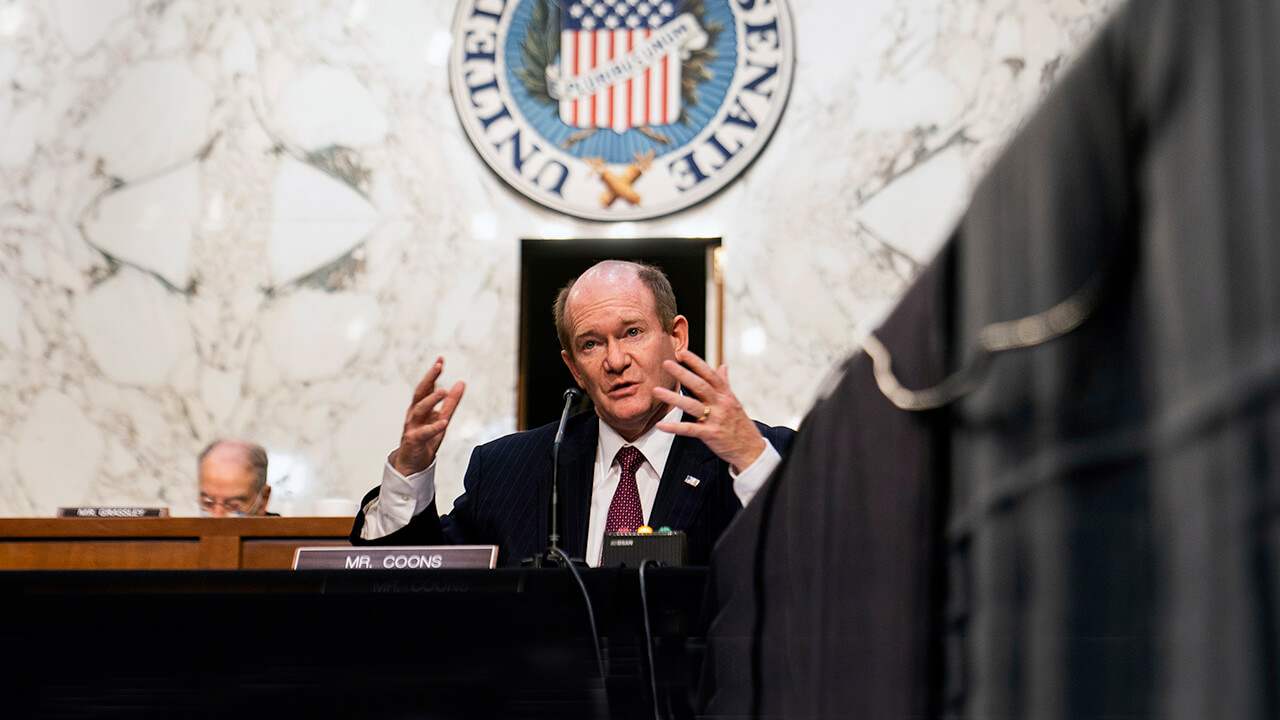 How national service can bring America together

To celebrate the 60th anniversary of the Peace Corps, Harvard College senior Vivian Herbert wore her red AmeriCorps jacket as she introduced a recent John F. Kennedy Jr. Forum event featuring two “champions of the Peace Corps,” Senator Chris Coons of Delaware and Mark Gearan, director of the Kennedy School’s Institute of Politics. Gearan, who previously served as director of the U.S. Peace Corps, opened a wide-ranging discussion with Coons, detailing his recent diplomatic mission to Ethiopia, the importance of American civic life, bipartisan legislation, and the future of the filibuster (he doesn’t see a change coming)—he even surprised Coons with a special guest.

Coons, who helped launch one of the first national AmeriCorps programs and is the co-chair of the National Service Caucus, said national service could be the issue that truly reaches across party lines. He remembered discussing it with President Joe Biden, shortly after the election. “I said it was helpful to me to hear he proposed a civilian climate corps and a public health jobs corps. I wanted to know if he personally believed in national service, and are these things we are going to fight for?” he recalled. “He said to me, ‘This is a priority for me. Service positively impacts the lives of Americans of all backgrounds.’ I think that bringing Americans together, which is a central plank of what President Biden ran on, will bring us together as a country.”  And bipartisan legislation can begin the healing.

The Civics Secures Democracy Act, co-sponsored by Senator Coons, Senator John Cornyn (R-TX), with Rep. Rosa DeLauro (D-CT), Rep. Tom Cole, (R-OK), and Rep. Earl Blumenauer (D-OR) is such a bill. The newly proposed legislation asks to restore civics education in American classrooms and targets federal investments to support and expand access to civics and history education. “Civic engagement is vital for the health of our democracy,” said Coons. “With expanded civics education in K-12 and higher education, this bill will equip new generations of Americans with a deeper understanding of their responsibilities as citizens and how to exercise their cherished rights.”

“I’m convinced this is a great moment in the journey of national service in America.”

Gearan, as if to underscore the importance of this legislation, shared findings from the most recent IOP Youth Poll, to be released in April. “We found a majority of young Americans say our political system is no longer able to meet the challenges that our country has faced. And only around 40 percent say that working in some form of public service is appealing to them,” he noted. Given the mission in our schools and President Kennedy’s vision of service, he put the question directly to Coons: “Why do you think this is the case and what can be done about it?”  Coons acknowledged many Americans’ lack of confidence that our political system can deliver meaningful solutions because “we have demonstrably failed to do so.” He sees political opponents working less on policy differences and working more to marginalize or disrespect each other. “The term I hear more often these days more than any other to describe your political opponent is: They’re crazy.” He says politicians need to listen better and work harder to find compromise. And bipartisan legislation, such as the Civics Secures Democracy Act, and the upcoming infrastructure package sponsored by Senator Chuck Schumer (D-NY), can help nurture better listening skills.

But Coons noted it has been some time since Senate colleagues worked across party lines, recalling his close working relationship with former Senator and IOP Fellow Jeff Flake (R-AZ).  And thanks to the new Zoom reality, Sen. Flake appeared on screen, allowing the two friends to discuss the future of Senate negotiations. “It used to get you accolades to reach across the aisle,” Flake remembered. “Now it gets you primaried.”

Returning to civic public service, all agreed reframing national service as an obligation we all share is key to moving our country forward. “I think we're at a point in our politics, where we have become tumultuous and divisive. We go through periods like this,” Coons explained. “In the late sixties and early seventies we experienced a similar disunion, and the twenties and thirties had periods of great political turmoil as well. But while the events of the last year may have strained the bonds of citizenship, I think we need to invest in reviving a sense of our shared purpose and the significance of democracy.”

A Conversation with Senator Chris Coons: National Service and the Biden Agenda

Q&A with David Ellwood: Can an expanded child tax credit make a dent in American poverty?

How will the stimulus package aid state and local governments?