Christina Fletes MPA 2016 wants to make sure that all Americans, especially those from underrepresented populations, participate in the democratic process. 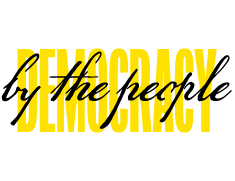 THE DAUGHTER OF NICARAGUAN IMMIGRANTS, Christina Fletes MPA 2016 was a fourth-grader in Redwood City, California, when state voters passed Proposition 227, the 1998 ballot measure that required the state’s public schools to teach all students in English. The development, which drew national attention, effectively eliminated bilingual education in a state where, at the time, one in four students was deemed “limited English proficient.”

“I remember being very intimidated anytime a teacher would ask me to read out loud,” says Fletes, whose lessons had been taught solely in Spanish, or in a mix of Spanish and English, through the third grade. “That was an impactful moment of my life.”

Sixteen years later the state legislature passed a bill, signed by then Governor Jerry Brown, that repealed most of Proposition 227. But her early childhood experiences—Fletes translated for her parents during teacher conferences and translated their election materials—pushed her to advocate in behalf of underrepresented populations in the state. Fletes is a voting rights lawyer at the ACLU of Northern California, working to allow more Americans to exercise their agency in the democratic process.

It’s not voter fraud but, rather, voter suppression that she’s trying to prevent. After the passage of the Voting Rights Act of 1965, voting access was on the upswing until 2008. (Of the 5 million new voters that year, 4.6 million were from underrepresented groups, and most of their votes went to Barack Obama.)

Amid swirling accusations that voting officials are trying to curtail minority votes that lean Democratic, voter participation in the 2016 presidential election was down by an estimated 2.7 percent, according to the United States Election Project, an independent information source on the country’s electoral system. The reasons are several, experts say: Some states have required a photo ID to vote (millions of Americans lack such proof). Others have made it harder for working Americans to cast ballots by reducing the time available for voting. Some counties have purged voters from their rolls, claiming that they no longer live where they claim to live. States frequently aren’t held to task for questionable behavior.

“Proving that it’s intentional is not always easy,” says Abdi Soltani, ACLU of Northern California’s executive director. “In California, we have put a major focus on working with our counties and with the state so that every person who wants to vote is readily able to register and vote.”

California has 5.5 million eligible but unregistered voters, most of them from communities of color. Every month, Fletes makes the 2½-hour drive to Fresno, in the state’s vast Central Valley, to get out the vote. The state’s interior is poorer and in some places more diverse than the coastal regions are. She often hears similar concerns, some of them questions of simple logistics, some of them born of apprehension: Does my vote matter? Where do I go to cast my ballot? Do I need an ID? “It’s scary to walk into a building and engage in a process if you don’t know how it works,” Fletes says. “What’s going to happen once you walk in the door? If you speak a different language, will somebody be there to help you?”

To date, California translates election materials into 10 languages. At least 220 languages are spoken in the state, according to the U.S. Census Bureau.

In 2019, Fletes was appointed to sit on the state’s Language Accessibility Advisory Council, established in 2016 to advise the secretary of state on issues related to elections and election materials. The ACLU’s concerns aren’t limited to language barriers. In 2018, the organization sued Secretary of State Alex Padilla for failing to provide voter registration services for low-income Californians and those with disabilities. A judge ruled that the state must expand its voter registration outreach.

As voting goes, California is watched closely by the rest of the country. Some legislative bills propose lowering the voting age from 18 to 17 and possibly to as young as 16. ACLU Northern California is pushing for the state’s 50,000 parolees to regain voting privileges; the loss of them is a form of disenfranchisement, Fletes point out, that affects mostly brown and black people and is rooted in the country’s discriminatory Jim Crow laws.

Meanwhile, Fletes in recent months has been meeting with community groups to apprise them of perhaps the biggest change to emerge on California’s electoral landscape in decades: the Voter’s Choice Act, which replaces neighborhood polling with one-stop mega “vote centers.” The centers are an attempt to increase participation by allowing residents to register to vote on site—on a day and at a time that fits their schedules. Voters in participating counties will still be able to mail in their ballots. With Fresno County adopting the system for its March 2020 primary election (the state will phase in the changes across its 58 counties), Fletes has asked Planned Parenthood and other well-known groups, along with community organizations such as Mi Familia Vota, Power California, and Valley Forward, to help with outreach efforts.

As a Latina lawyer, Fletes belongs to a small sorority—statistics show that just 2 percent of California attorneys are women of Latin descent—and she has made it a point to be a role model for first-generation college students or law school students who want to promote social justice. One of her Berkeley Law classmates was Evelyn Rangel-Medina, now the managing director of United for Respect, a nonprofit group that, in part, works to raise the minimum wage and create paid family leave and paid sick time for the economy’s part-time workers. “After a big test, we’d have a pizza and a drink and talk about our dreams, and strategize about our careers and the big impact we wanted to have on the world,” Rangel-Medina says. “We wanted to give back to our community.” 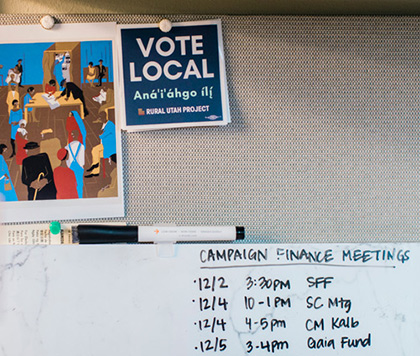 Fletes is already battle-tested in her short time with the ACLU. In June, she and two colleagues filed a lawsuit against Fresno County’s chief elections official after a Unitarian Universalist Church was removed as a polling site for the state primary in June 2018. The reason? The church refused to cover up “Black Lives Matter” banners that were hung on the property. Although state election laws say that campaign-related materials must be at least 100 feet from a polling site, the ACLU argued that the banners were more than 200 feet from voting booths and were not campaign related. The lawsuit is pending. It charges that the elections chief violated the church’s First Amendment right to free speech.

The church scuffle is one reason that Fletes left a global law firm in January 2019 to join the ACLU. “It felt like I needed to get out of the locker room and go back to what I originally intended to do, which is public interest work—working for racial justice, working for people in my community,” she says. “It feels like I am in the right place at the right moment.”

Her commitment has powerful antecedents. “I’m the daughter of immigrants,” Fletes says. “I’ve always had to fight or advocate for people, especially my parents. I’ve had many privileges—going to Harvard and getting my law degree—that other people in my shoes have not. The best thing I can do is use my position to help others who may not have the same opportunities that I had.”

In addition to her experience with Proposition 227, another legislative proposal—this one federal—shaped her fate. In 2006, when she was in high school, the Border Protection, Antiterrorism, and Illegal Immigration Control Act proposed to criminalize assistance to undocumented immigrants who sought food, housing, or medical services. The House of Representatives approved the bill, but it died in the Senate.

Fletes skipped a day of school to march in San Francisco with thousands of others who were shouting their objections. “I protested with my parents and uncle, who wouldn’t typically be out there protesting,” she says. “We were a community raising our voices against something that we felt was wrong. That was more important than being in class.”

The first in her family to attend college and the first to be born in the United States, Fletes was a sophomore at UC Berkeley when she applied and was accepted to the Kennedy School–sponsored Public Policy Leadership Conference. The annual event targets students who are committed to public service and gives them a taste of what it’s like to study public policy in a graduate school environment. The experience emboldened Fletes—“I got to see what public policy was”—and she ultimately enrolled at HKS, where she was awarded a Gleitsman Leadership Fellowship, which recognizes potential activists. 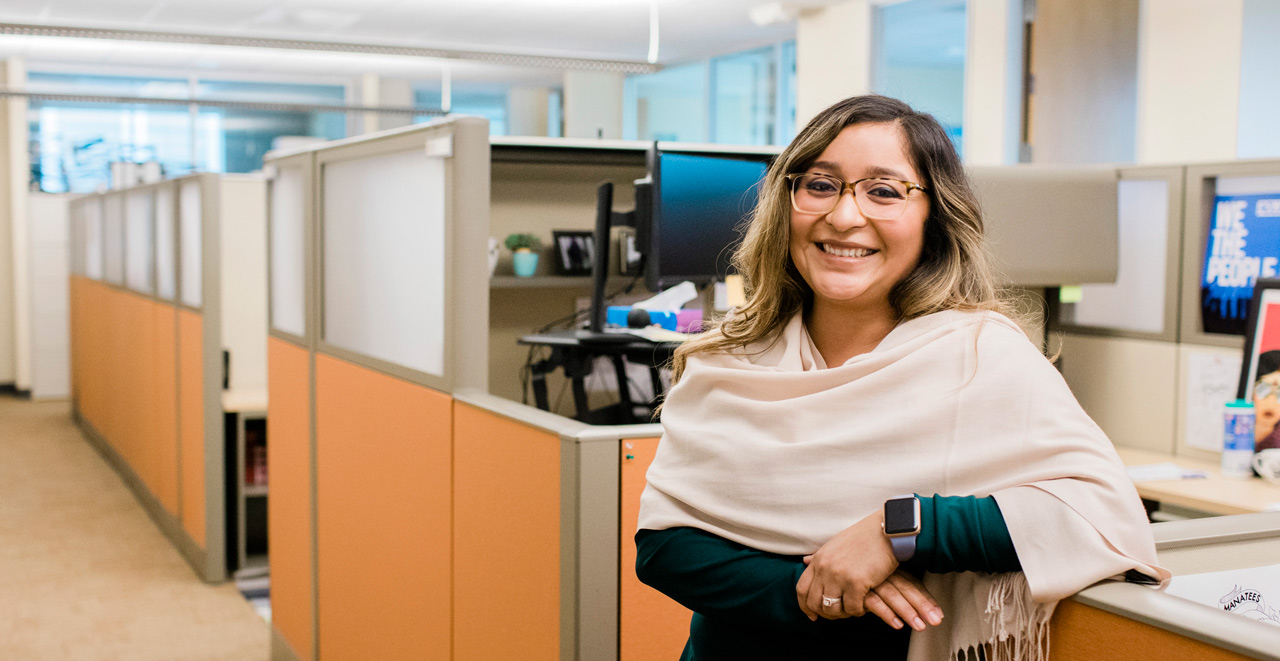 During her time at the Kennedy School, Fletes heard a presentation by Bryan Stevenson MPP/ID 1985, a lawyer and founder of the Equal Justice Initiative, a human rights organization in Montgomery, Alabama. He urged Fletes and her classmates to “work with communities that people don’t want to help.”

“He told us to make sure that we understand the problem, and then to work directly with the people who are impacted,” she says. “I’ve really taken those lessons to heart. I want to hear from people on the ground and work with them to achieve their policy and legal goals, not just tell them what they need.”

Art Reyes MPP 2014 was a Gleitsman Fellow who grew up a working-class kid in Flint, Michigan. “When I came to the Kennedy School, there were probably some stereotypes that I had around who my classmates would be, and the privilege they would be coming from,” says Reyes, the founding executive director of a community organizing group in Michigan. “I was immediately drawn to Christina. She’s incredibly passionate and remarkable at the work that she does.”

Before enrolling at Harvard, Fletes managed the first-ever national gathering of quantitative data about the lives of domestic workers. Her research resulted in a report, “Home Economics,” that received national press coverage and has been instrumental in helping states adopt domestic-worker bills of rights. After her first year at HKS, Fletes was awarded a Dubin Summer Fellowship by the school to collaborate with another workers’ rights organization, the Restaurant Opportunities Center, for which she continues to work in her bid to eliminate the federal subminimum wage.

Back in San Francisco, posters line the walls of the ACLU’s San Francisco office. They speak aphoristically of liberty and justice for all. Another placard bears the image of Supreme Court Justice Ruth Bader Ginsburg, who once famously said, “Just as buildings in California have a greater need to be earthquake proofed, places where there is greater racial polarization in voting have a greater need for prophylactic measures to prevent purposeful race discrimination.”

On her hourlong train ride to work from her suburban Hayward home, Fletes catches up on the headlines by listening to “The Daily,” a New York Times podcast. The news highlights the regular drama of the Trump administration. Although Fletes expects President Trump to drive more Californians—and Americans in general—to the polls in the 2020 presidential election, her hope is less ephemeral: “We want to make sure that voting becomes a habit, not something that happens when it feels like an emergency situation.”

Photos by Alison Yin, taken at the ACLU offices in Northern California

Built for this Moment