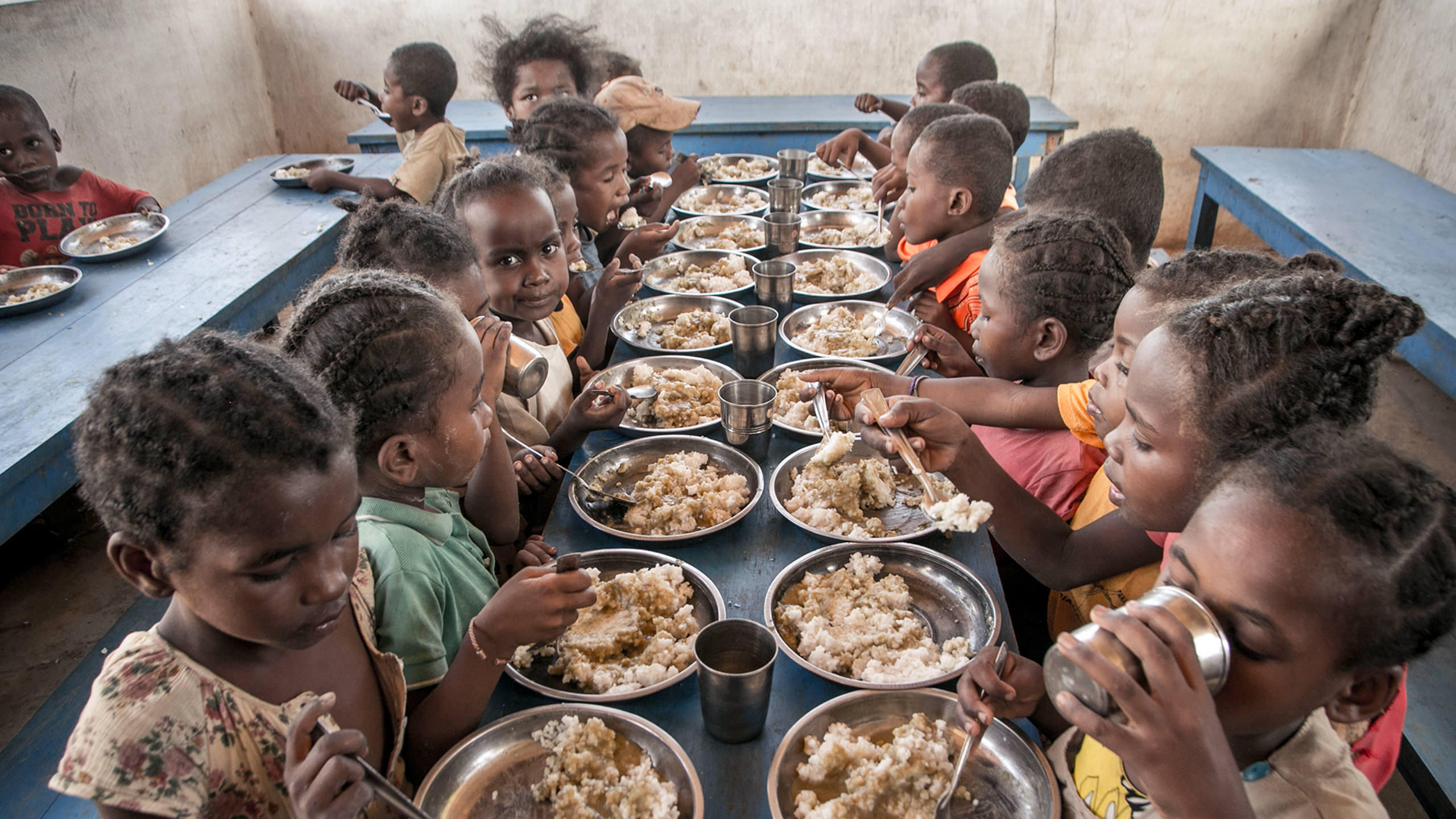 WHEN JEAN-MARTIN BAUER MPP 2001 started working at the United Nations’ World Food Program (WFP) two decades ago, the old-timers—veterans of interventions in famines—would tell him they needed to measure just two things to monitor food insecurity in a region: food prices and rainfall (prix et pluie, in the French spoken in the West African countries where Bauer was first stationed).

“They had a few dozen markets in a country that were monitored every week, and they’d know what the price of millet was in francs per kilo,” Bauer remembers. “They’d been doing it for years, so they could compare it with a five-year average. Then they’d have rainfall gauges placed in different parts of the country, and when it rained, monitors would write down how many millimeters fell. These reports on food prices and rainfall would come back to the capital, sometimes on camelback. And that’s how you’d understand if there was a food crisis and how a determination was made that we needed to bring in international food aid to the country.”

In October, Bauer was dispatched to Afghanistan by the WFP to assess the situation following the government’s collapse in the face of the Taliban’s advance. From a hotel conference room in a suburb of Kabul, he and a team of other experts from U.N. agencies dove into a trove of data. A survey of 12,000 Afghan households, conducted first via cell phones and then door-to-door, provided information on livelihoods and food consumption. Satellite imagery and remote sensing data detailed rainfall and snowpack conditions, vegetation, and even poppy crop estimates. Then, of course, there was the collapse of the economy, brought about by the ongoing civil strife and the Taliban takeover in mid-August, with job losses and bank closures. The results were deeply disturbing: 23 million people, or 55% of the population, were in need of humanitarian assistance.

Although the core of the WFP’s work is still in many ways the same as it has been since its founding, in the early 1960s—helping feed people during emergencies and improving food security for the most vulnerable—its approach has evolved. And Bauer, who helped develop the agency’s cell phone survey methodology nearly a decade ago and is now the WFP’s senior advisor for digital innovation at the U.N.’s headquarters, in New York, is at the forefront of a push to modernize the humanitarian agency, using and analyzing data not only to improve responses to hunger crises, but to predict them as well.

“I’m a numbers person,” says Bauer, “and I do believe that data and tech can transform positively what we’re doing as humanitarians in the field. Even if the end product is still delivering a bag of rice, making sure it gets to the right person is something that data can help us do. We can do a lot better with the right data.”

“We’re also increasingly doing things like e-payments. In Afghanistan, a quarter of our response is going to be through what we call cash-based transfer, so people will get either a voucher or cash in hand. The responses themselves are also getting more sophisticated. But it starts with the right assessment of the situation,” Bauer says. “Better use of data and tech is certainly one of the ways we’re going to get to zero hunger.”

“I’m a numbers person, and I do believe that data and tech can transform positively what we’re doing as humanitarians in the field.”

Bauer grew up outside Washington, D.C., the son of immigrant parents. His father is from the Alsace region of France and had come to the United States on a Fulbright scholarship. His mother is Haitian. He went to college at the London School of Economics, eventually coming to the Kennedy School in 1999. The executive director of the WFP at the time had taken an executive education course at the Kennedy School and came back to campus to recruit new talent. Bauer was one of the lucky few to be hired. He was immediately sent to West Africa, where he stayed for 10 years.

“That was really working on frontline food-aid programs, working on drought relief in Niger and Mauritania, and resilience programs,” he says. “I moved to Guinea-Bissau, a former Portuguese colony, which was recovering from conflict.”

Then, Bauer remembers, during a severe food-price spike in 2008, someone recalled his training in economics, and he was sent to work as an analyst at the regional bureau in Dakar, Senegal. “What I was doing at that point was traveling to every single crisis in West Africa to understand the economics of the emergencies that WFP was facing,” he says.

He focused intently on the local food economy, particularly people’s purchasing power. At the same time, the WFP transitioned from providing bags of food to providing cash. “We did the first food vouchers in Africa,” Bauer says. “I’m very proud to have worked on that. But you need very robust market analysis before you can start doing things like that. Today we’re doing more than $2 billion a year in cash transfers worldwide.”

That market analysis involved understanding local financial systems—understanding how trading networks functioned, how they responded to incentives, whether traders would be able to accommodate an infusion of cash from WFP programs. Bauer’s work was recognized and he was sent to WFP headquarters in Rome to do it on a global scale.

His work in technology was accelerated by another crisis. The Ebola outbreak in West Africa in 2014 in some ways prefaced the lockdowns of 2020, and with no humanitarian workers allowed in the field, following the situation remotely became critically important. The mobile surveys were expanded to 35 countries.

After returning to the field once again—when the Ebola crisis had been resolved—to lead the WFP’s operations in Congo, Bauer is now based at U.N. headquarters in New York. There, his job is to evangelize new humanitarian solutions, mainly those involving technology and the use of data and artificial intelligence.

“Even if the end product is still delivering a bag of rice, making sure it gets to the right person is something that data can help us do. We can do a lot better with the right data.”

HungerMapLIVE is a perfect example. Launched by a colleague of Bauer’s, the platform employs all available data to predict food insecurity using artificial intelligence. During the conflict in Yemen, when phone surveys were impossible, the mapping system was able to predict a degradation in food security and increase the amount of food the agency was distributing on the ground.

“It pulls information from satellite imagery, so they’ll look at vegetation. They will look at satellite pictures of Earth at night—lights at night correlate really well with people's welfare [because they indicate electricity use]. They look at food prices,” Bauer says. “It’s automatic and it’s instant.” Then, using algorithms, the agency can determine food needs. Specialists on the ground can check the data, but the technology allows the agency to be proactive and predictive. “These are things that we want to scale up all over the humanitarian space,” Bauer says. “What we did with food security with the HungerMapLIVE, it could be the MigrationMapLIVE; it could be the PandemicMapLIVE. That’s where we need to go.”

Cooperation with private industry is invaluable in this effort, but also difficult. For example, cell phone call records can show whether a person is consistently in one area or has suddenly moved. Skillfully used, while protecting privacy, these records may be able to indicate whether people have been displaced. The WFP has worked with telecommunications companies to get that data in the past, but the process can take up to a year. The agency is also working with a blockchain start-up to help transfer money, using a stable cryptocurrency coin, thus ensuring that payments are made safely and end up in the right digital wallets. This system is being used in small pilot programs, in which young people are paid for microtasks, and in huge humanitarian interventions, in which more than a million refugees a month receive e-payments via blockchain.

But risks and privacy concerns abound. Refugees and aid recipients can be registered with biometric and other personal information, and if that falls into the wrong hands, the downsides could be enormous. So, data security becomes paramount, Bauer says.

“Twenty years ago, the humanitarian assessments were, you’d get a report on a camel’s back about rainfall in that part of the country. Well, these days it’s not machine learning only, but machine learning first,” Bauer says. “You'll get your initial insights from something like the HungerMapLIVE, and then you’ll have to continue with other methods to refine your opinion. But it’s machine learning first right now, and that relies on a ton of data. That's the gas in the engine.”