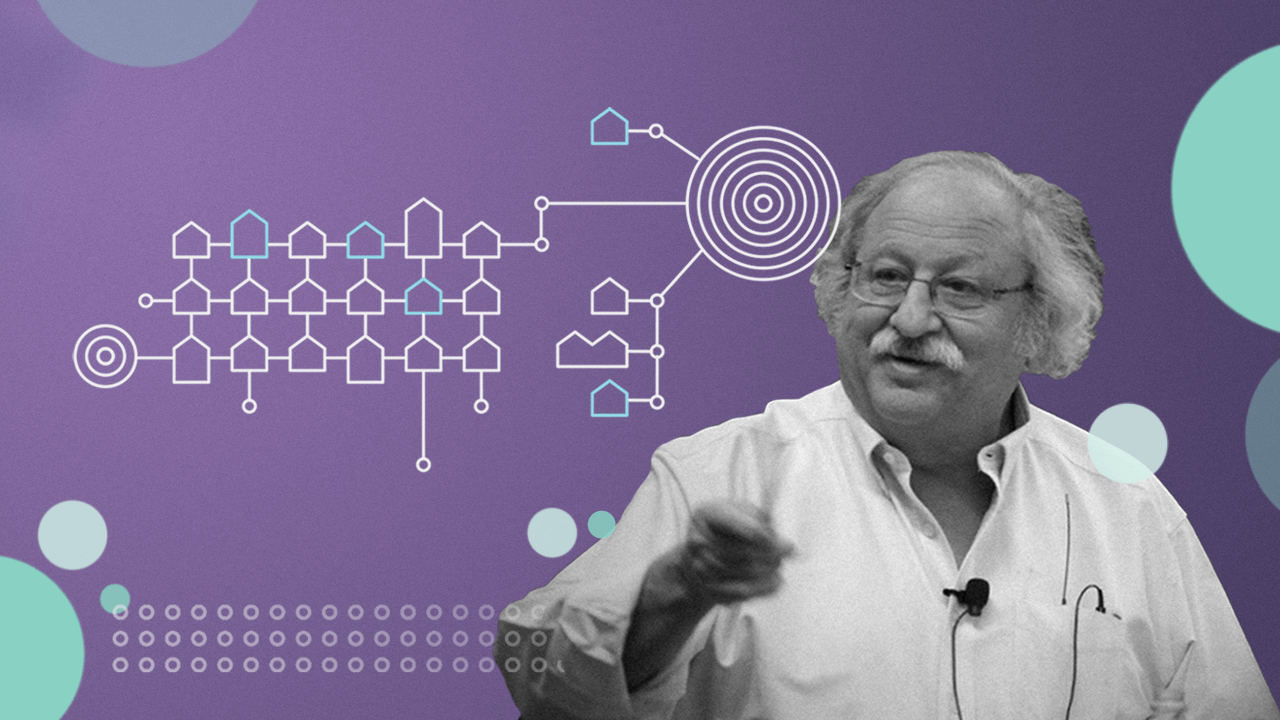 Marshall Ganz says it's possible to build online learning groups that are rich in relationship and community—if you know how.

Marshall Ganz was teaching his online executive-education course “Public Narrative: Leadership, Storytelling, and Action” last fall when one of his distance-learning students from Norway visited the Harvard Kennedy School campus in Cambridge.

She sat in on a normal, in-person lecture. Afterwards Ganz asked her what she thought.

“She told me: ‘Online was more intimate,’” Ganz said during a recent Zoom videoconference seminar for Kennedy School faculty and other Harvard staff on building community online.

“I said: ‘What do you mean?’ And she said: ‘Well, I’m sitting here in class looking at the back of everyone’s head and I see you up there in front. But online on Zoom I see everybody’s faces, and I can see tears, and I can see laughter, and I realize what I am a part of.’”

Ganz was thunderstruck. “It's not something I would have thought of before, but it turns out to actually be a truth,” he said.

With virtually all higher education institutions switching to remote learning due to the coronavirus pandemic, universities have put a premium on approximating the experience of in-person teaching—despite what many see as the limitations of Zoom and other remote-learning tools.

But Ganz, the Rita E. Hauser Senior Lecturer in Leadership, Organizing, and Civil Society had a much more optimistic take on the possibilities and promise of teaching over Zoom, gleaned from his experience running  online courses in leadership and public narrative since 2010. While teaching over Zoom is a different experience from teaching in the classroom, for Ganz it is not necessarily a lesser one.

In fact, he said, instructors are just beginning “to learn the possibilities of this medium.” 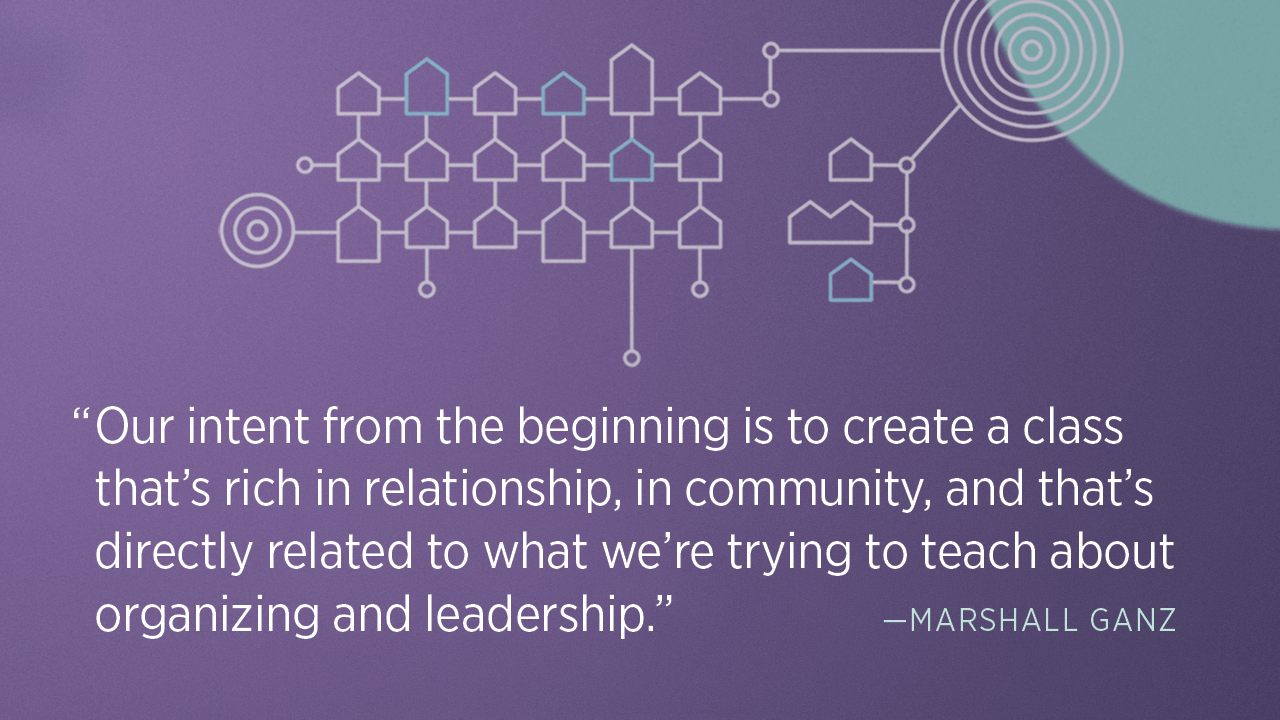 An expediency, but also an enhancement

While it may be little comfort to those trying to learn without adequate space or resources at home, or with children or other dependents to care for, Ganz said the silver lining is that videoconferencing and the accessibility of high-speed broadband internet have matured into highly-useful technologies just as they are needed most.

But there are also features of online teaching that can enhance the experience in ways a classroom environment cannot. One example is the chat function, Ganz said. He originally thought the chat, which typically appears in a column on the right-hand side of the video conference window, would be distracting. Not so.

It turned out to “be more of a counterpoint,” he said. “Because it engages people. People can have conversations, ask questions, react to things” in a way that holds their attention and is not distracting in the way it would be in a live classroom.

During the seminar, the head teaching fellow for Ganz’ Public Narrative class, Sarah ElRaheb, monitored the chat, and said it was also “a way to pull our questions that have not been answered” to add to the class discussion in real time.

The importance of the personal

A key advantage to online learning, Ganz said, is being able to see all participants’ faces clearly. “The fact that we see everyone’s faces all at once means we have more awareness of everyone paying attention and being present,” he said during the seminar, which was titled “Building an Online Learning Community.”

That helps support the real goal, which Ganz described as “a building a relational community of learning.” Other ways to build interpersonal bonds include welcoming playlists, supportive snaps, one on one breakouts, shared norm setting,  section names and chants.

“In other words, our intent from the beginning is to create a class that's rich in relationship, in community, and that's directly related to what we're trying to teach in terms of organizing and leadership,” he said.

The seminar started with an icebreaker, where Ganz asked participants to introduce themselves, say where they worked, what they teach, and to describe their “superpower.” Responses to the last question centered on remote work due to the coronavirus pandemic, ranging from one participant who said hers was “figuring out what to cook from very random sorts of ingredients,” to another who said “figuring out how to be alone.”

Ganz explained that his methodology for online teaching and community building has four main parts: explain, model, practice, and debrief.

“We ask people what worked, what needs to be improved and what were your takeaways,” he said. “It’s the idea that you're always critiquing and affirming because you're in a community  of continual learning.”

Other important elements for instructors to prioritize include accountability and transparency. For example, in his classes Ganz shares figures on attendance, how many people show up in each section, and which students are submitting papers on time with everyone at the beginning of class.

“It's a little competitive, but it's also the idea that we're all accountable to each other for our learning,” Ganz said. “If you don't show up, then you're not just depriving yourself, you're depriving your classmates. And if somebody shows up late, they may have to sing a song for 10 seconds or do a silly dance or something that, which recognizes that ‘Hey, you need to be accountable.’”

The debate over instructors cold calling students for responses happens both in physical classrooms and online, but Ganz said it can be a necessary tool to keep a remote-learning class rolling. “In person it can feel natural to embrace silence, but online it can feel really overwhelming when there's a silent stretch.

It takes a village

A final key factor for effective remote teaching and community building is adequate human support, Ganz said, to make sure the class can take advantage of all the technological enhancements that tools like Zoom offer.

For one of his recent courses, which had 100 enrolled students, he was assisted by two program support staffers, one head teaching fellow, and five teaching fellows. During the online sessions, they took on various roles including a chat monitor, a scribe for slides, an attendance manager, a technology coordinator and troubleshooter, and a timekeeper.

With the right support, Ganz said he’s bullish both about where online learning is now and where it’s going in the future—even though there are sure to be bumps along the way.

“When you're in a learning community, it's like learning to ride a bike,” he said.  It's not going to be perfect. You're going to fall. Eventually — with support — you learn to get your balance.”

When spring break is anything but, the HKS community connects virtually