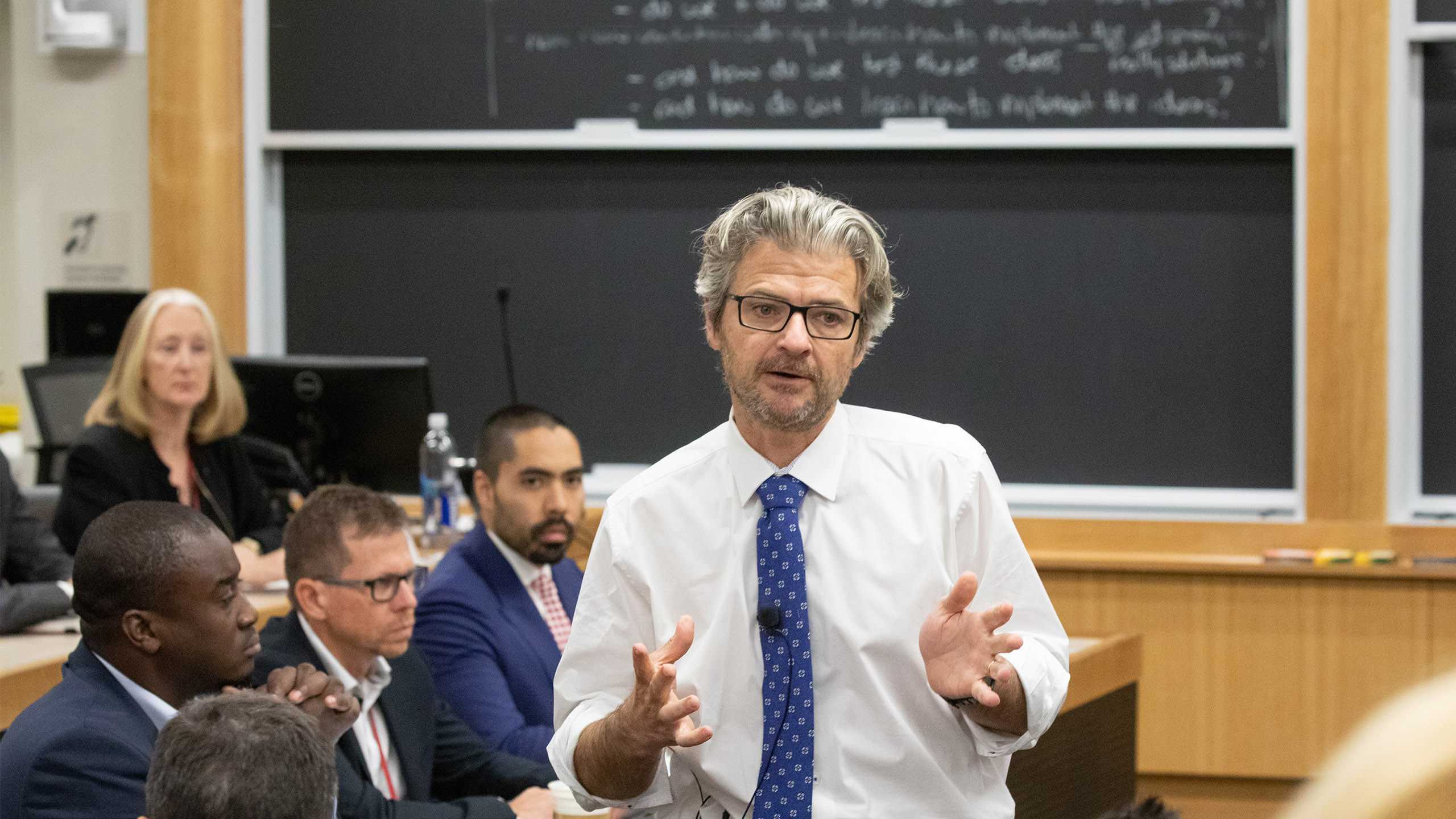 Executive Education participants and degree program students at HKS learn to avoid a rush to solutions and instead trust an iterative process.

There is no shortage of great theoretical solutions out in the world of public policy and public administration—the biggest challenge is implementation. That is the idea behind Problem Driven Iterative Adaptation (PDIA), an approach to making change in a world marked by complexity and ambiguity. It is an approach that eschews theory and champions doing, and that is suspicious of universal solutions but looks instead to the incremental and the possible.

PDIA is a method used at Harvard Kennedy School to help both practitioners and students learn how to approach and eventually solve difficult public problems. It originated in the economic development space, driven by Matt Andrews, Edward S. Mason Senior Lecturer in International Development and faculty director of the Building State Capability (BSC) program at the Center for International Development, in conjunction with former HKS colleague Lant Pritchett. The approach was responding to the continued failure of top-down policies, often the results of policies designed by people far from the problem itself and with no experience in implementation.

But PDIA is now being used across all types of public policy applications. It first requires a shift in mindset, says BSC Director Salimah Samji: “The rush to jump to solutions is so strong that we have to try so hard to get people to stop thinking about what they’re going to do about it, and to instead understand what the problem is and follow the process.” The approach therefore begins with identifying the problem, deconstructing it, understanding where the entry points are to search for possible solutions. And then constantly, and humbly, learning from failures and successes and iterating and adapting.

It’s an approach that has had a remarkable application at the Kennedy School, where faculty, researchers, and students have applied it to complicated real-world scenarios and yielded significant results. Participants in the "Implementing Public Policy" HKS Executive Education program learned and used the approach on real problems they were struggling with, and when given the chance to collaborate with degree program students also learning the process, they returned to HKS to work together. Teams of students from Andrews’ and Samji’s degree program class MLD-103M “PDIA In Action” were then assigned to work with executive education alumni on an issue they were grappling with and use PDIA to provide a roadmap toward action. We highlight two instances, one in the United States and one in Nigeria, where this approach has made an impact.

Every day in Nigeria, preventable deaths occur due to a lack of safe blood. Adaeze Oreh, a consultant family physician and the current head of planning, research, and statistics for Nigeria's National Blood Service Commission (NBSC), has made it her mission to find out why.

Oreh’s experience as a program consultant in 2009 for the U.S. President’s Emergency Plan for AIDS Relief project for blood services in Africa and as a clinical physician in northern Nigerian hospitals led her to form a team dedicated to unraveling Nigeria’s complicated barriers to the supply and access of safe blood throughout the country. With the daunting challenge of innovating the blood safety problem, Oreh signed up for the "Implementing Public Policy" executive education program in the hope that it would lead her to a solution. Instead, what she learned from Andrews and the teaching team came as a surprise.

“When I came into 'Implementing Public Policy,' I basically had a bullet list of things in our toolbox that we thought could work and, in my mind, the HKS faculty were going to help me see how those things could work,” Oreh said. “I wasn’t prepared for how differently I would be thinking by the end of the program.”

Rather than answers, Oreh found new ways of thinking about the problem and new approaches that she and her team hadn’t considered when focused solely on results. When presented with the opportunity to reengage with HKS and continue her learning experience with degree-program students, Oreh jumped at the chance.

“The rush to jump to solutions is so strong that we have to try so hard to get people to stop thinking about what they’re going to do about it, and to instead understand what the problem is and follow the process.”

HKS Master in Public Policy candidate Dana Radojevic, a student in MLD-103M, described the process of applying PDIA to the issue of safe blood in Nigeria as intensive and iterative, as well as rewarding.

“When you’re told that you have an issue of safe blood in Nigeria, what most people think is that must be because of transfusion-transmitted infections, and we just have to fix that,” Radojevic said. “[Speaking to Oreh] was like falling into a rabbit hole of understanding just how deep this was. It really became overwhelming … and that’s why the PDIA process was so important because we needed to dive deeper and understand all of these other things that were underneath the surface that were impacting this issue.”

These factors include screening for infections, access in emergency situations even for remote locations, availability for women who hemorrhage before or after childbirth, supplies for children who need blood for disease, as well as obstacles such as cultural perceptions surrounding blood donations, terrorism, and poor infrastructure.

Despite the enormous scope of the problem along with the limited time, the student group managed to identify three concrete solutions by staying focused on each individual step of the process and compartmentalizing the work using the PDIA method.

“Having this opportunity was so different because it was the first time at HKS where I was able to really put my tools and my skills and my knowledge into fixing a real-life problem,” Radojevic said. “It was something I had tangible impact on while I was a student at HKS.” 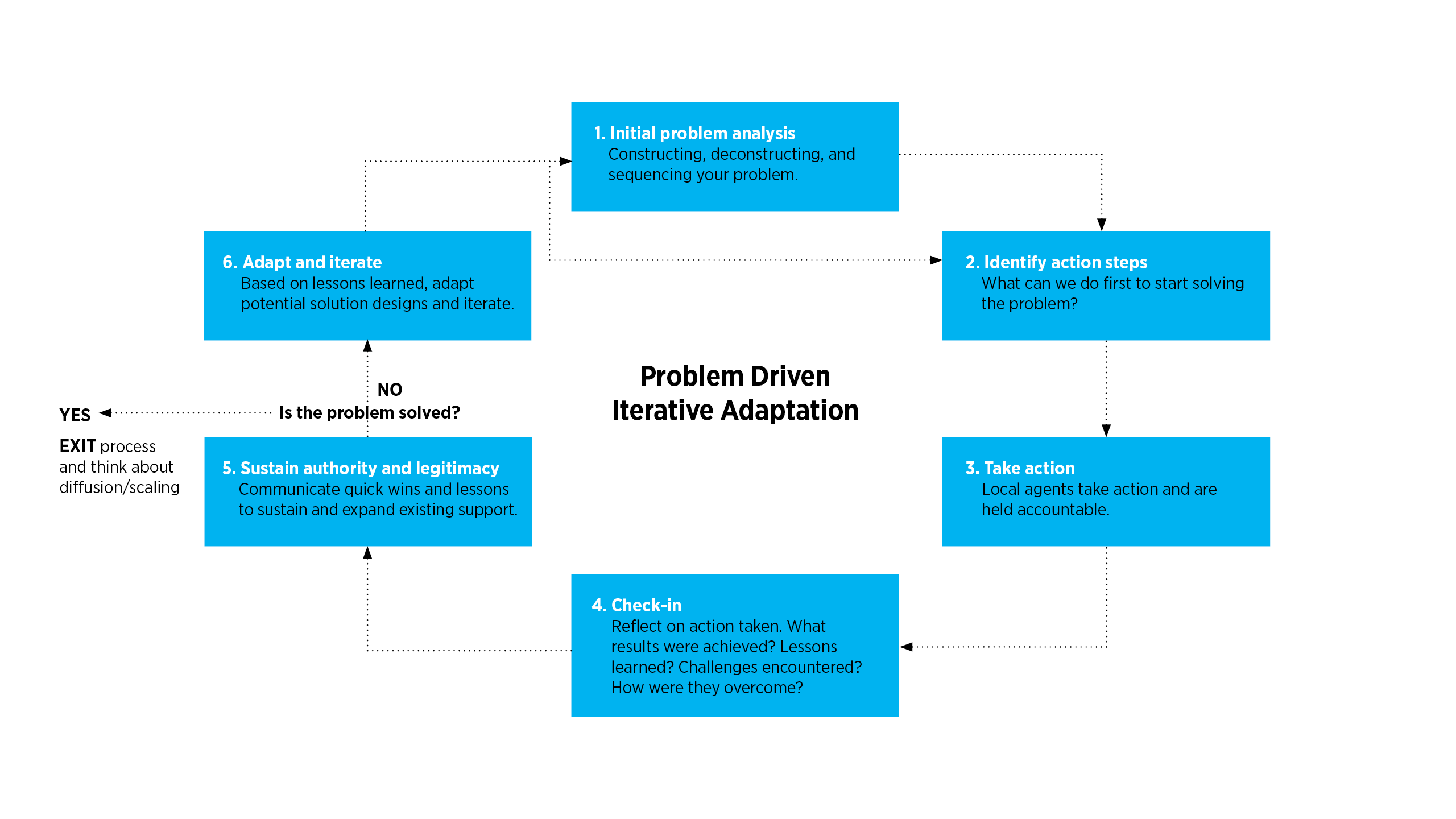 Dementia in the Workplace in Massachusetts

Olga Yulikova felt helpless and stuck professionally. As the state director of the Massachusetts Senior Community Service Employment Program, the challenge she faced was helping elderly, unskilled people get jobs. With limited funding through the Department of Labor, the program can accommodate less than 1% of the eligible population and according to Yulikova about 50% of people weren’t getting a job even with the program training and support. What she had, which the PDIA method is built for, was a “sticky problem.”

“After attending Implementing Public Policy, I realized I have been practicing a lot of PDIA principles all along without knowing it,” Yulikova said. “Moreover, I learned that the fact that ‘I ran out of ideas’ was not a sign of a personal failure, it was a respite moment to pause and reexamine my assumptions.”

Using PDIA, Yulikova was able to deconstruct her sticky problem by going back to the basics and talking to users about their needs and experience with the program. Within weeks, her team started making incremental changes like giving participants free access to computers and the internet, as well as adding online courses, and saw an immediate positive impact.

One area that Yulikova wanted to dig into more was the issue of dementia and the early onset of dementia in the workplace. This is the problem she brought to the MLD-103M students.

Andrea Hayes, program manager at the Growth Lab in the Center for International Development at HKS, was in the MLD student group tasked with uncovering more about this issue for aging workers.

“This particular issue [of dementia] was interesting to me because of a personal experience with someone in my family, and so I thought that I could learn something,” Hayes said. “I had no idea what it meant or what it would be until we started to really work on it, and I became super interested in how we could use the framework to help Yulikova in her objective of helping the elderly and people with dementia to continue in the workforce or help them remain active at least in the early stages.”

Through the PDIA process, Hayes and her team members gained insights into the problem, the biggest being that dementia can happen to anyone. This change in understanding helped the team to change the narrative around the disease and start to think of ways to help people become more empathetic to people affected by dementia and their caregivers. As Hayes and her team put it, “In this way, lack of awareness was not only part of the problem, but it was also part of the solution.”

“PDIA is neither an exact science nor a panacea for all problems,” Yulikova said. “PDIA is a methodology that helps one examine the causes of problems and work on solutions regardless of shifting environments. It is not just a system of bureaucratic steps, it is a framework to help public policy practitioners to examine and re-examine their work, without losing sight of the reason why they dedicate themselves to this profession in the first place.”
—
Banner image by Martha Stewart; inline images courtesy of Harvard Kennedy School Executive Education

Managing crisis without resources: Developing nations brace for the coronavirus

Bringing signature HKS teaching to remote learners all over the world