Professor Cornell William Brooks leads the Harvard Kennedy School’s William Monroe Trotter Collaborative for Social Justice, which he calls a think-and-do tank for Harvard students committed to social justice advocacy and rigorous applied research. Named for an early-20th-century civil rights pioneer, African American newspaper editor, and distinguished Harvard graduate, the Trotter Collaborative runs a host of activities, including conferences and a field course that allows Harvard students to work with social justice oriented governments and organizations across the United States. To this end, the Trotter Collaborative offers students a range of opportunities to work with organizations dealing with social justice issues. The collaborative, which Brooks founded in 2018, is housed in the School’s Center for Public Leadership.

Q: How would you describe the purpose of the Trotter Collaborative?

What we have created is a platform that offers in-person scholarship and online conferences to leverage the analytic capital of Harvard for students at Harvard and proximate leaders elsewhere.  I call these leaders “practitioners of democracy,” who are not formally on a college campus yet want to learn more about how to engage in advocacy and public policy. What I find distinctive about the Trotter Collaborative is the interdisciplinary approach. We involve the Harvard Divinity School because you can’t just talk about law and policy, the law of ethics and morality is also critically important.  We have law students looking at these problems, leveraging their professional backgrounds. We have students from the Harvard Graduate School of Education, Harvard Business School, and the Harvard Graduate School of Design. We are very committed and clear about equipping students to address injustice with both hard and soft skills.

Q: You teach MLD-375, “Creating Justice in Real Time.” How does that course align with the work of the Collaborative?

It’s really a tough course on leadership. Rather than prescribe what problems they should be working on, we serve as a resource for students.

The theory of the class is advocacy. In other words, not just policy analysis and design, but how do you advocate for policy and secure justice in real time? We partner with organizations, sometimes nonprofits, sometimes mayors, sometimes governors. With these partners, our work encompasses four areas:

What's different here is that rather than merely create a blue-ribbon report, they look at funding, at communication strategies, and at stakeholder strategies. In other words, they’re going beyond just providing advice. They're going three-quarters of the way toward implementation. After the completion of a class earlier this year, our students spoke to the media about their advocacy, learning, and public policy advising. 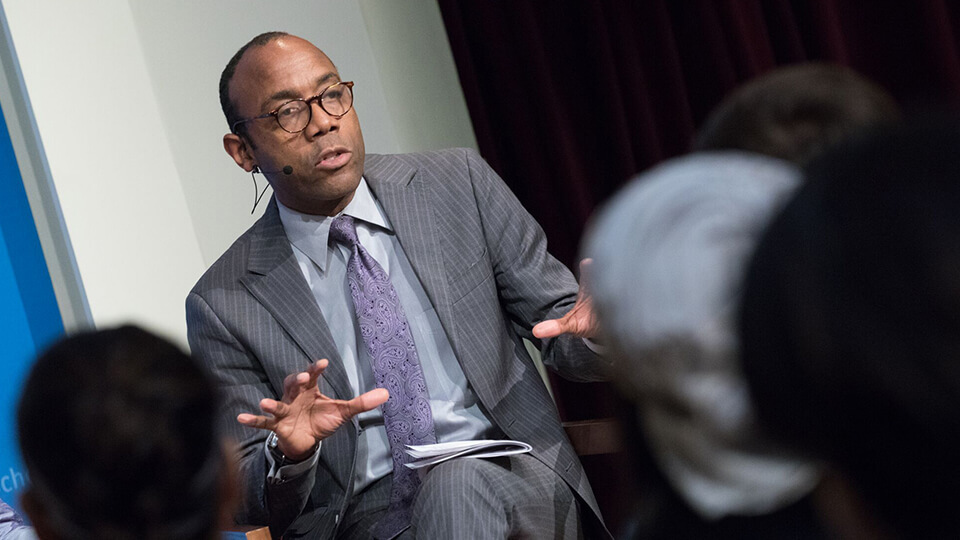 “We are harkening back to the past, speaking to the present, looking to the future.”

This is an exciting collaboration that grew out of our work in the past year. We had two teams, one assigned to Governor Ralph Northam of Virginia, and one assigned to Governor Phil Murphy of New Jersey. In New Jersey, students worked on the COVID-19 response to some of the second- and third-order effects, such as the eviction crisis. What do you do about the eviction crisis atop the shortage of affordable housing? People lose their jobs. They’re sick. They get behind on their mortgage. They’re subject to eviction. What does the state of New Jersey do in the wake of that, in a state with one of the greatest wealth disparities and racial wealth gap disparities in the country?

In Virginia, students looked at trust gaps, knowledge gaps. Immigrant communities may trust the government at one level, African Americans at another, seniors at yet another. How do you bridge those trust gaps? What do people know about therapeutics? What do they know about vaccinations or social distancing? What are the consequences of not building trust? How do you build in racial equity in a state where the governor is limited to one term? In other words, if the effects of COVID-19 last beyond one term, how do you bake into the policy a racial equity claim? The students took these problems, attended community meetings, interviewed members of these relative administrations, wrote papers.

Mayor Randall Woodfin, a colleague of Trotter Collaborative Staff Director Devon Jerome Crawford, worked with our students to develop a comprehensive policy roadmap reimagining almost every aspect of policing in Birmingham, Alabama, following the death of George Floyd. We did similar work for the cities of Albany, New York, and Somerville, Massachusetts.

After the class was over, we took what they learned and partnered with the Bloomberg Harvard City Leadership Initiative. They created a special teaching session for over 50 mayors dedicated to policing and used the work of the students as a case study. We used their work not to just teach these mayors, but we are looking to use it as a foundation for forming more partnerships to do more work with more mayors.

Q: You mentioned conferences. How do these play into the work of the Trotter Collaborative?

So far we have sponsored three conferences: Achieving our Country: An Academy of Citizen Activism this past spring; The Good Trouble Lab from 2020; and the Social Justice Hackathon in 2019.  The goal is to put the advocacy teaching into action. The conferences are similar to legal clinics at law schools. In creating the conferences, we give students the responsibility of reaching lay people. We are in this moment where you have more activism than we’ve seen in a couple of generations. But as we also know the expression of outrage is not necessarily an outcome. We have incredible resources at Harvard, but the issue then becomes how do we get this research out to the people who need it? How do you take that research and use it in ways that are helpful to activists and advocates around the country? These conferences gather artists, activists, advocates, scholars, media figures, and lots of young people, and put them all on the same platform. We essentially do teaching, facilitating relationships among the groups, but also in effect create an executive education program for the people taking the most risk in terms of social justice.

Teaching beyond Harvard is essentially doing what William Monroe Trotter did over a century ago with social justice challenges of the day through The Guardian newspaper in Boston. He used the newspaper to teach people about the social justice challenges of the day: lynching, voting rights, and segregation. What we're trying to do in 2021 is create a kind of digital platform for teaching well beyond Harvard: voting rights, police brutality, racialized violence, environmental racism, and healthcare disparities.

Q: You were the executive producer for a recent CNN documentary, "The People v. the Klan." How have you incorporated that experience into the work of Trotter?

What we did with the documentary is create a teaching syllabus and reading list, curated by Harvard students. The documentary is about a lynching that was covered up by a police department. If you watch the documentary and you want to learn more about the relationship between policing and lynching, we have an exhaustive resource list, organized chronologically and linked to original sources. As an example, Americans can learn that southern police departments came into being as a consequence of southern slave patrols. We show a sheriff’s badge from South Carolina in 1843. It’s a sheriff star, but it says “slave patrol.” This is an example of the institutional origins of policing.

"The People v. The Klan" is a great teaching opportunity, and I am proud of the syllabus our students pulled together.

Q: What is next for the Trotter Collaborative?

In the next few weeks faculty member Linda Bilmes and I will be releasing a research paper on restorative justice and the history of reparations in our country. This came about as a consequence of the inspiration of her students in class as well some of my students who took on the creation of a reparations commission in New Jersey as a class project. They, along with students from Harvard Law School, asked Bilmes about a governmental, budgetary, and fiscal response to reparations.

In the fall, we have 60 students enrolled in an HKS class on race and advocacy, followed by a clinical offering in the spring. And in April 2022, we're looking at a major convening in honor of William Monroe Trotter’s 150th birthday. We plan to use an online and in person conference. We will look at him as a historical figure who figures prominently in the present moment.  We are harkening back to the past, speaking to the present, looking to the future. Young practitioners of democracy, activists, artists, advocates, in current social justice struggles and challenges all across the country in this moment of generationally unprecedented activism, can look to him as the patron saint of activism in Boston. We are proud that he is part of Harvard’s activist advocacy legacy.