Equity Investor: Tania Del Rio MPP 2016 is working on issues of inequality and working to effect change for women in all levels of the workforce | Harvard Kennedy School Skip to main content

Equity Investor: Tania Del Rio MPP 2016 is working on issues of inequality and working to effect change for women in all levels of the workforce

FOR TANIA DEL RIO MPP 2016, the passion she brings to her current work began, in a sense, with a Policy Analysis Exercise (pae). Del Rio enrolled at Harvard Kennedy School after serving in Mexico’s Foreign Service. Once on campus, she delved into research being conducted by Albert Pratt Professor of Business and Government Iris Bohnet—co-director of the Women and Public Policy Program and now academic dean—on how to combat implicit gender biases in the workforce by improving decision making within organizations.

Then her old employer, Mexico’s Ministry of Foreign Affairs, came knocking. Both Mexico’s senate and the UN had recommended that the ministry investigate why the number of female ambassadors it appointed had plateaued at 27 percent, and Del Rio was enlisted to analyze possible reasons. The resulting pae project earned accolades—the Outstanding Policy Analysis Exercise Award and the Jane Mansbridge Award for research on gender issues—and was deeply rewarding for Del Rio.

“The work was academically fascinating,” she says, “and it was done for  an organization whose people I knew, so the recommendations I made had a human face.” Today, Del Rio is the executive director of the Mayor’s Office of Women’s Advancement for Boston, and the faces of the people touched by her work are all around her.

Highlighting issues of inequality and working to effect change for women in all levels of the workforce is Del Rio’s overarching focus. Her remit from Mayor Martin J. Walsh includes continuing the efforts of a pay equity program that has garnered national acclaim, developing workforce support programs and addressing affordability issues within the childcare sector, and expanding efforts to combat sex trafficking through a corporate alliance initiative. 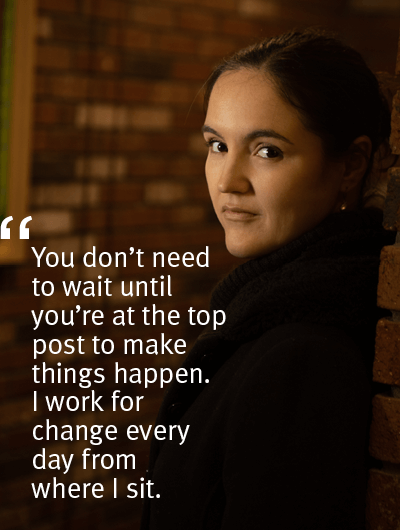 For the past four years, the Office of Women’s Advancement (where Del Rio was preceded by Megan Costello MC/MPA 2019) has had a laser focus on tackling pay equity issues, and the results have been impressive. The model involves a three-pronged approach—helping individual women navigate more successfully through an already biased system while simultaneously working with employers and legislators to change unfair aspects of that system.

“We’ve trained more than 8,000 women in our salary negotiation workshops, and nearly 90 percent of those participants take some sort of action, whether that be researching if they’re being paid fairly or actually making the ask and hopefully getting a raise or a better job,” says Del Rio. “Women have to use different strategies than men, and it’s important that they learn how to mitigate social backlash.”

At the same time, Boston has brought together almost 250 companies that convene regularly to discuss ways to advance women in leadership and close the pay gap, but that have also signed the mayor’s 100% Talent Compact, agreeing to supply wage data so that the city can produce an aggregate picture of current pay gap statistics. “We are the only city doing this,” says Del Rio, noting that the group includes Putnam Investments and State Street, among others. “We get calls from cities, states, even some foreign governments, asking us how they can follow suit. We caution them that you can’t do it without engaging individuals and employers, and doing that alongside advocating for equal pay legislation at the state level.”

Del Rio—who grew up in Mexico and the United States—started her work with the city with the Diversity Team, helping to implement the mayor’s goal that the city’s 20,000-strong workforce reflect its population. Boston is 23 percent black and 19 percent Latino, and the city actually employs about 27 percent black but only 12 percent Latino workers. “Those are gaps we would like to close, from entry-level jobs up through senior leadership,” admits Del Rio. “We’re getting closer to our goal, but we’re not there yet.”

Indeed, revealing the need for change in the process of working on a problem is not something Del Rio shies away from. She is proud of the launch of a user-friendly public dashboard that reflects the city’s workforce broken down by ethnicity, gender, and earnings, and notes this is something most organizations are too scared to do. “But our information has to be public,” she says, “and when you share your information freely and solicit feedback on how to improve, antagonists become collaborators!”

This perspective will serve Del Rio well as she shifts her focus to the issue of affordable child care (Massachusetts is the most expensive state in the country for child care) and supporting the child care workforce—90 percent female, 61 percent women of color, 44 percent immigrant women—of whom more than 30 percent are living under the poverty line.

She knows she has her work cut out for her, but she’s focused and committed. “You have to have an open mind to different ways of attacking problems, and sometimes we really need to look beyond,” she says. “I work for change every day from where I sit.”
—

Honorable Charge: Rye Barcott MPA 2009 has set out to change the political culture in Congress by helping elect veterans