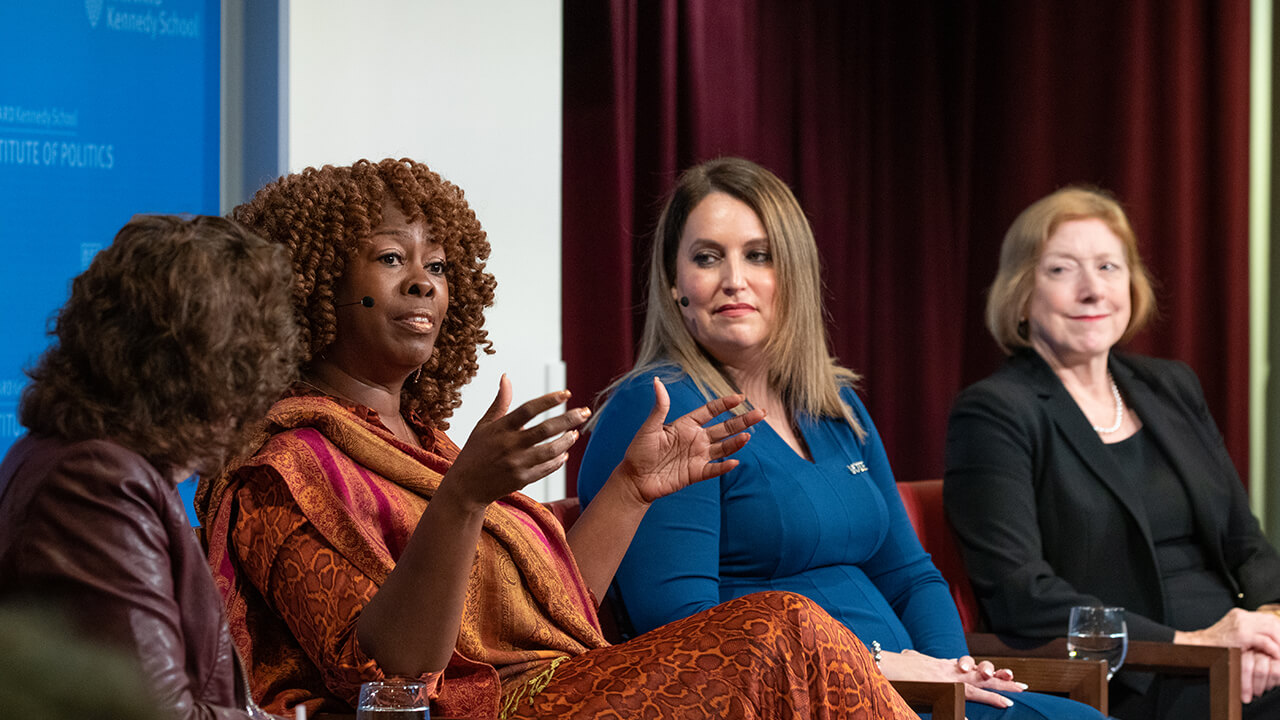 Following Through on the 19th Amendment’s Promise

The 19th Amendment’s guarantee of American women’s right to vote was an important step forward, but much work remains for its promise to be completely fulfilled almost 100 years on, a panel of experts and activists said at the John F. Kennedy Jr. Forum this week.

“When we’re talking about suffrage it’s one thing to secure the idea of this right, but it’s another to make sure it’s respected and implemented,” said Institute of Politics Resident Fellow LaTosha Brown, the co-founder of the Black Voters Matter Fund. “We’ve seen that just from 2016 up to now there have been 16 million people dropped from the voting rolls, so as we celebrate this history … it’s really important for us to know that the fight isn’t over.”

Sullivan explored the history of women’s suffrage movement leading up to the 19th Amendment, which was the first time that the word “women” was added to the Constitution. Even the 14th Amendment, which broadened citizenship and equal protection under the law, she said, mentioned neither gender nor race when it was ratified in 1868, and the U.S. Supreme Court ruled explicitly in 1874 that it did not apply to women voting.

Wald said that half a century later, the 19th Amendment was supported by organized labor and supporters of the temperance and abolitionist movements. “You can tell a lot about a movement ... by their enemies and by their allies,” she said.

Opponents included mill owners concerned about stricter child labor laws, brewers and distillers, and even the New York Times, which editorialized that suffrage could lead women to want to be police officers, firefighters, soldiers, sailors, and even “elected officials and judges.”

“So that’s something to celebrate,” said Wald, the former president of the Massachusetts Women’s Bar Association and an HKS adjunct lecturer in public policy.

But Brown said she believes the fact that the suffrage movement “was actually built out of the abolitionist movement” has largely been forgotten and that African-American women who were instrumental to the movement, such as Sojourner Truth and Ida B. Wells, have been marginalized by historians.

“And even though black women were instrumental in the suffrage movement, it wasn’t until 40 years later that our right to vote was secured with the passage of the Voting Rights Act,” she said.

Any discussion of suffrage that does not delve into white patriarchy and its broader effects is incomplete, Brown said. “For us somehow to not have this conversation [in the context of] race and how it all comes out of white patriarchy—it’s not just hurting black people and people of color, it hurts all of us,” she said.

“We are seeing voter suppression at an all-time high,” said Kase, who in her first few months on the job was arrested during an act of civil disobedience on Capitol Hill over the confirmation process for Supreme Court Justice Brett Kavanaugh. “We are seeing attacks on our democracy in ways we’ve never seen them before.”

Kase said the League is pushing for passage of a federal bill called the Voting Rights Advancement Act, which would restore safeguards for equal access to voting and polling places that were stripped from the Voting Rights Act of 1965 by the Supreme Court in 2013. That decision, she said, has opened the way for state and local officials in some areas to adopt laws and practices that make it more difficult for people of color and naturalized immigrants to vote.

Sullivan said that even with the inclusion of the 19th Amendment, the Constitution is still incomplete when it comes to a broad protection of equal rights for women.

“The United States is the only industrialized democracy with a bill of rights in the world that doesn’t have a gender equity provision in its constitution,” she said. “If you look at France or Germany or Canada, they all have provisions that say men and women shall have equal rights.”

Panelists at the forum discussed what's changed—and what hasn't—in the century since the 19th Amendment removed barriers to a woman's right to vote in the U.S. Left to right: Sarah Wald, LaTosha Brown, Virginia Kase, Kathleen Sullivan

All three panelists stressed the importance of passing of the Equal Rights Amendment, which since it was introduced in 1971 has been ratified by 37 of the 38 states needed to amend the Constitution. An attempt to make Virginia the 38th state failed by one vote in the state’s House of Delegates earlier this year.

“The Equal Rights Amendment,” Sullivan said, “would finish the job in the Constitution.”

Thickening the culture of participation: Archon Fung on why tinkering around the edges of voting won’t get us to a truly participatory democracy