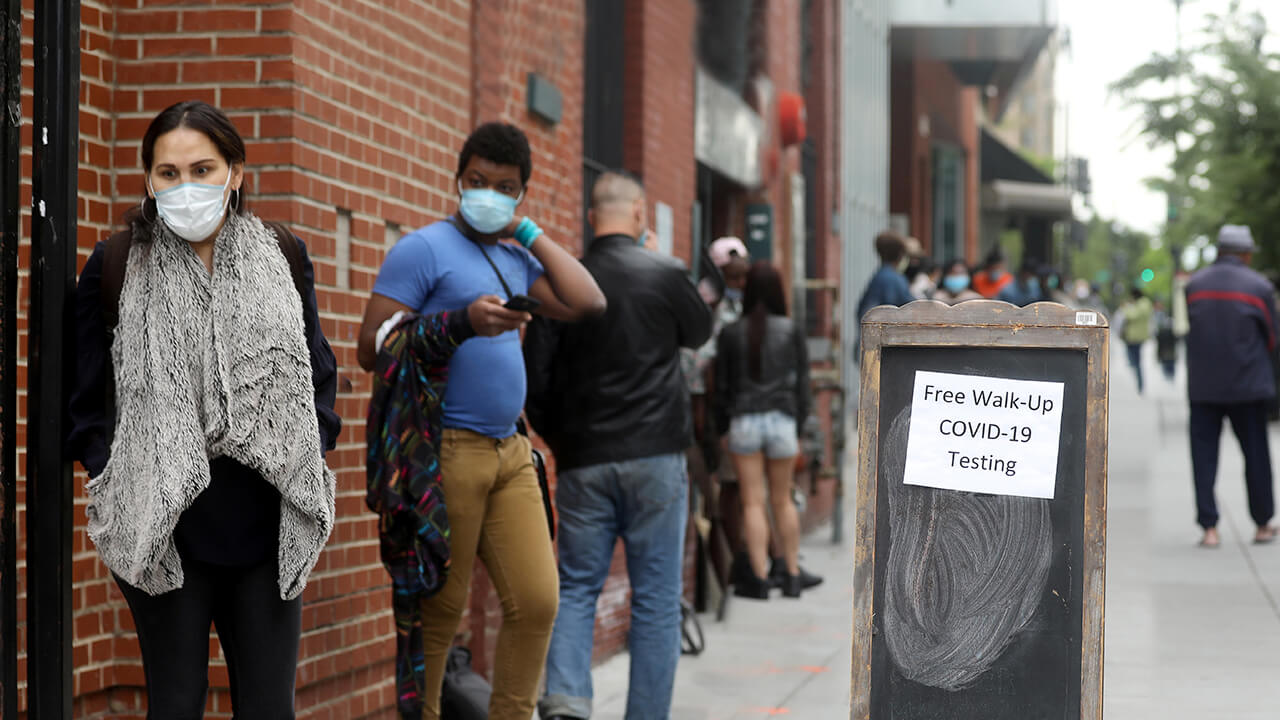 The latest survey by a consortium of researchers on public attitudes about COVID-19 policies finds that most testing results are coming too late to help slow the coronavirus’ spread.

Reported delays in COVID-19 test results mean the U.S. testing program has bogged down to the point where it is mostly a non-factor in fighting the pandemic’s spread. That’s the finding of the seventh in a series of surveys conducted by the COVID-19 Consortium for Understanding the Public’s Policy Preferences Across States. Public health experts say testing (and especially testing asymptomatic individuals) is a cornerstone of containing the spread of COVID-19 and should ideally involve testing higher risk and asymptomatic individuals, isolating positive cases, tracing and testing the contacts of those positive cases, and repeating this cycle. But slow test results make contact tracing impractical.

The consortium, which includes researchers from Harvard Kennedy School, Harvard Medical School, Northeastern University, Northwestern University, and Rutgers University, has been conducting a large, 50-state examination of attitudes and behaviors regarding COVID-19 in the United States since April. The latest survey asked 19,058 individuals across all 50 states and the District of Columbia about their experiences with testing, and was conducted from July 10 to 26. We asked Matthew Baum, the Marvin Kalb Professor of Global Communications and Professor of Public Policy at Harvard Kennedy School, to summarize the latest findings.

(You can find previous reports online at www.covidstates.org.)

Q: This latest survey by the consortium found that most people (63 percent) are not receiving their test results within the optimal one-to-two-day time frame and that the average waiting time for a test result is a little over four days. What do those numbers and the other survey findings say about how effective America's testing program is right now?

The main takeaway from our survey is that in the United States, turnaround times on COVID tests are not fast enough to support effective contact tracing, which, in turn, makes containing the spread of the disease extremely difficult. Moreover, we find no evidence that the testing turnaround times are improving over time. Rather they seem to be more-or-less stagnant at a little over four days on average. We as a nation need to do better.

Q: A substantial minority (21 percent) of individuals are receiving test results that are essentially useless (five+ days old) in helping to control the spread of COVID-19. Given that we've been living with COVID-19 for nearly half a year now, how did that happen?

The prevailing view appears to be that the absence of a clear national strategy focused on expanding the nation’s testing capacity has created a situation in which the states compete for supplies as basic as cotton swabs, while also relying upon the same limited set of commercial laboratories to conduct the actual tests. The commercial labs have expanded their capacity since March, and so the U.S. has been able to substantially increase the number of tests being conducted. But as the numbers of cases have surged, demand has increased at a rate that has outstripped the corresponding increase in capacities, ranging from supplies of test materials, to available machines for processing tests, to human beings trained to operate the machines. The result is a continued inability to achieve sufficient testing or sufficiently rapid test results to facilitate containing the virus.

“The single biggest lesson that comes through from our work is that political polarization has handicapped our nation’s response to the COVID pandemic at virtually every level.”

Q: Waiting times appear to be following the pattern of other aspects of the pandemic in that they are disproportionately affecting Black Americans (five-day average) and Hispanic Americans (4.6-day average) compared to whites. What factors could contribute to the test result time disparities?

The unfortunate truth is that we don’t entirely know the answer to this question. We do have some insights though. These differences almost certainly result in part from the, mostly localized, acute imbalances between supply and demand across numerous states. On the supply side, you have wide variation in state public health infrastructure/capacity, particularly in less-affluent communities and disproportionately in areas proximate to communities of color. On the demand side, many of the largest surges in COVID infections have occurred in large cities, like Los Angeles, Miami and Houston, with relatively large African American and Hispanic populations. The rapid surges in cases have resulted, in some of these locales, in demand for tests that greatly exceeds the available supply, again, disproportionately in areas with relatively limited capacities to begin with. The results are long waits for tests on the front end and for test results on the back end. Finally, while a minority of states with relatively robust public health infrastructures, like New York, have stood up their own in-state testing and reporting regimes, many states rely on a limited number of national and regional laboratories for their test results. These labs face supply shortages and are overwhelmed by the nationwide surge in cases, further delaying results.

Q: This is now the seventh in a series of surveys by the consortium. What overarching themes have you identified about how Americans are reacting to the pandemic?

I think the single biggest lesson that comes through from our work is that political polarization has handicapped our nation’s response to the COVID pandemic at virtually every level. It starts with the vacuum created by a national leadership that deferred to the states rather than developing and implementing a coherent national strategy. But it extends to virtually all aspects of the national response, from acknowledging the seriousness of the crisis, to cooperating across party lines in response to it, to the politicizing of basic public health initiatives, like mask-wearing. In virtually every case we see large effects of political polarization. The other lesson is that the pandemic has ripped wide open many of the tears in the nation's social fabric and public infrastructure caused by decades of rising socio-economic inequalities. The result is wide disparities across racial and socio-economic groups in health and economic impacts, and wide variations in the willingness and capacities of different states, and different groups within states, to respond to the many challenges posed by the pandemic and its effects.

What our public response says about public management