Tracking attitudes and behavior on COVID in all 50 states, week by week | Harvard Kennedy School
Skip to main content 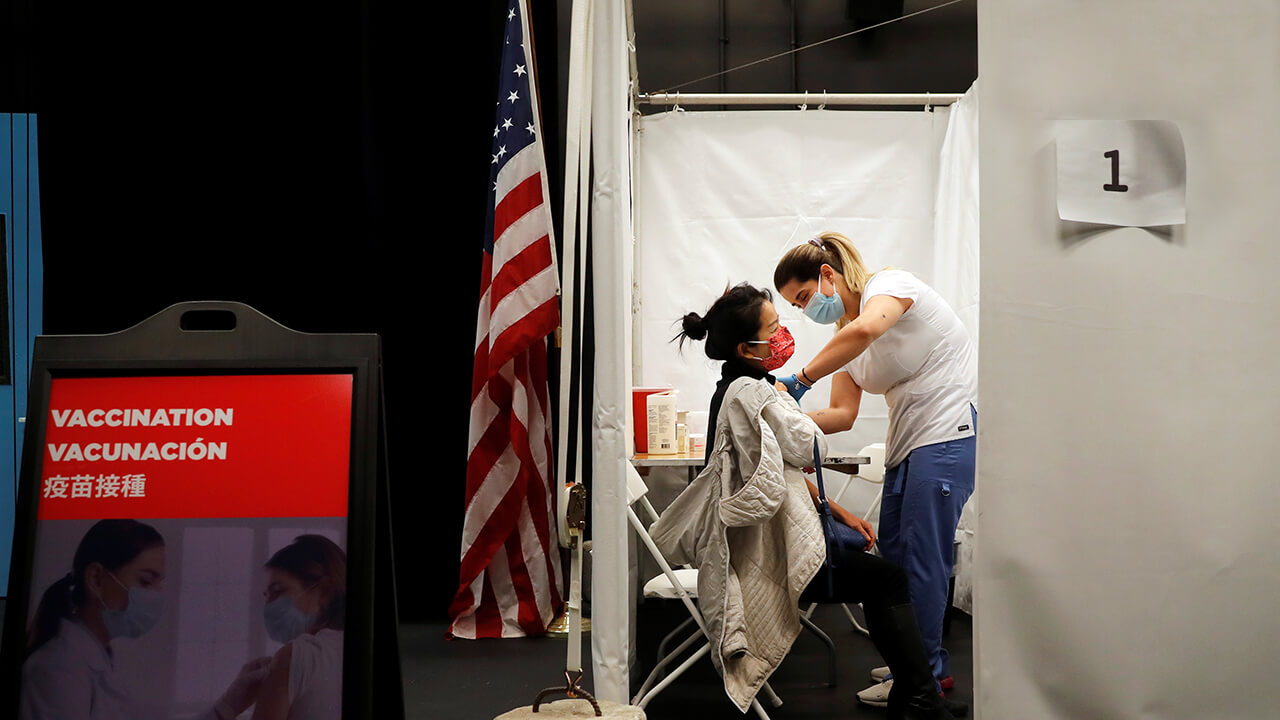 Researchers from Harvard help drive far-reaching project gauging how people view the pandemic and the tumult of the past year.

In a far-reaching project measuring American attitudes and behavior during the pandemic, researchers from Harvard and three other universities have polled people in all 50 states  for nearly a year, reporting each week not just on evolving views toward the virus but on how the tumultuous political events helped shape the public response.

Among the surprises: the surveys have documented strong bipartisan support for tough state-level lockdown measures and found deep, ongoing public trust in science, despite media narratives to the contrary. At the same time, the polling has confirmed differences based on party, race, region, and education level on many issues, such as willingness to be vaccinated.

The research team has examined the relationship between the pandemic and the Black Lives Matter protests of the spring and summer, the divisive election campaign of the fall, and the persistent “misinfodemic” of false information online. The team’s goal is to keep investigating public attitudes and actions for the duration of the vaccine phase and through the hoped-for return to something like normal over the course of this year.

Along the way, the COVID States Project is building a deep reservoir of data on one of the most eventful years of the last century that should serve scholars for many years to come, gathering a quarter of a million survey points. The researchers have polled 18,000 to 25,000 people in every state each month since last April to generate the raw material. These findings, released in weekly themed reports, have been shared with policymakers struggling to figure out how and when to reopen schools and stores and how to get people vaccinated.

The three lead researchers are political scientists Matthew Baum, the Marvin Kalb Professor of Global Communications at Harvard Kennedy School, David Lazer, a professor at Northeastern University who also runs the Lazer Lab, and Katherine Ognyanova, an assistant professor of communications at Rutgers.

While a number of national surveys explore aspects of COVID, few if any are in the field so often and with such reach to be able to delineate differences in regions, states, and even counties. The project has the added ability of including new questions based on news developments through the year—such as gun sales, election fairness, and the Jan. 6 attack on the Capitol, which became fodder for a survey report just days after it happened.

“I don’t think anything like this has been attempted before by academics, at least not without resources far in excess of what is typically available to social scientists,” said Baum, who studies the intersection of information, media, and politics from his base in the Shorenstein Center on Media, Politics and Public Policy. “We have built quite a rich and diverse database of public responses to some of the most dramatic and unique crises in the nation's history.”

One strength of the approach is that each survey wave can generate granular snapshots of aspects of the pandemic. Take, for example, report No. 40, issued last week. The research team drew data from its latest 50-state poll on attitudes of 1,797 healthcare workers toward the vaccine. The goal was to better understand vaccine hesitancy and resistance, and to dissect it based on income, gender, education level, political view, and much more—and then to compare those views to the general population. 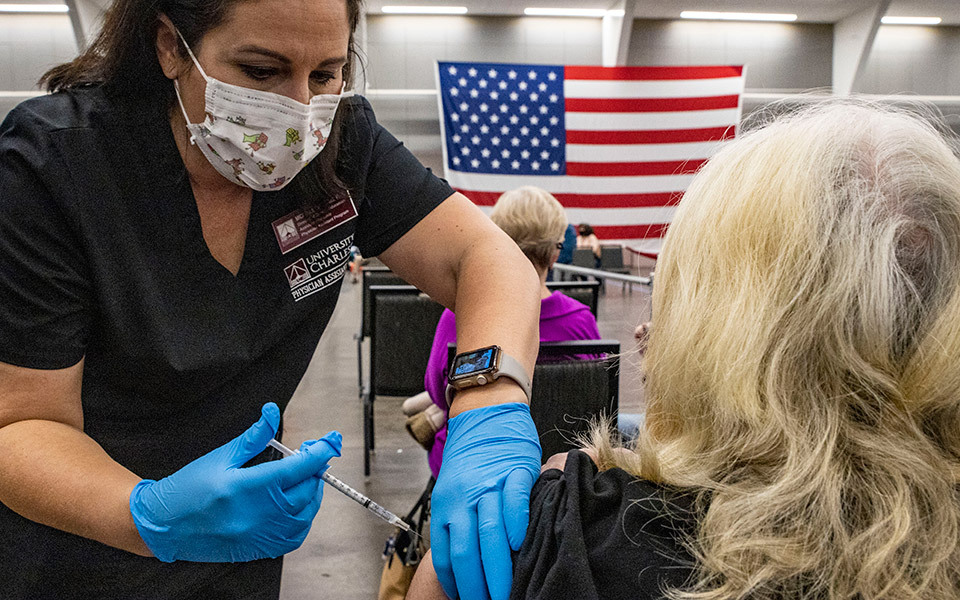 The results: those who earn more and have more years of schooling are less resistant to getting the vaccine jab. And health workers who have already received the shot tend to be the most privileged, best paid, and highest educated.

Lazer said that report covered “the first large, diverse population receiving access to the vaccines. The question is: do we find that our concerns regarding inequality and vaccination rates manifest in this group? The answer is an unambiguous yes, with large inequalities in all of the expected directions with respect to gender, race, education, and income. So, it's distressing, like a lot of our reports, but really good to get out there in the public conversation.”

“We have built quite a rich and diverse database of public responses to some of the most dramatic and unique crises in the nation's history.”

An earlier report documented some of the political, regional, and racial differences in overall public attitudes toward COVID-19 vaccination. Data from late December and early January showed important differences between vaccine hesitancy (wanting to take the vaccine eventually but not right away) versus vaccine resistance (not wanting to take the vaccine). Democrats reported higher enthusiasm and less resistance toward vaccination than Republicans and independents. Seniors reported the least resistance by age. African Americans and other racial minorities reported greater resistance, “likely attributable to longstanding and persistent inequalities in access to health care and institutions.”

Ognyanova said the project came together quickly last spring, at a time when the three professors were fretting separately about the huge immediate impact the pandemic caused. Coming together in the project “was a way of channeling our anxieties about the environment into trying to do something productive,” she said. “We launched the project to help policy makers design better solutions.”

For example, she said, the survey results on mental health consequences of the pandemic have been especially important: “Once we started looking into it, we realized it was going to be an enormous challenge, especially among young people who seem to be the most vulnerable to increased anxiety and depression.”

The project relies on a relatively new online polling methodology. The scholars work with Pure Spectrum, a company that loops together polling firms with operations in all 50 states to create a relatively affordable nationwide sampling system to engage statistically valid groups of people via the internet. The scholars rely on a couple of dozen graduate students and post-docs to carry out the detailed processing and analysis to generate the published reports.

The numbered reports are issued soon after the field work, so the information is nearly current for policymakers as they try to make judgments about issues such as school and business reopenings. President Biden’s transition team drew on some of the reports when it was shaping approaches to vaccine communication strategies.

Baum said that among the key contributions was documenting the extensive public support, across party lines, for some of the lockdown measures at a time when much of the media coverage suggested far more partisan division.

“We had really timely information on the way citizens were responding to governors who were or were not taking proactive pandemic mitigation measures,” Baum said. “This provided supportive evidence for leaders who wanted to implement aggressive policy measures to counter the pandemic. We were able to discern nuances in public opinion that nobody else was able to show in such detail—that across parties, across ideologies, across all the states, there was much more support among the population than was reflected in the popular discourse,” Baum said.

He pointed to a related insight from the survey with clear policy implications: “Trust in science around COVID-19 has generally been extremely high, which runs counter to the prevailing public narrative about public skepticism toward science.”

Lazer said that while the initial focus was on near real-time reports on COVID that could assist policymakers and journalists, the researchers also were thinking longer term—toward in-depth research. And the project team has indeed begun to produce a batch of research papers; three have been published on the site (two of them have already been accepted for publication by peer-reviewed journals), while another half-dozen papers are underway and over a dozen are in the planning stage.

He noted that the geographic twists of the pandemic in the United States—first attacking the Northeast and the West Coast, then hitting the South, the Dakotas, and then synchronizing and hitting the entire country in December and January—made the state-by-state aspect of the research data especially valuable. “While these behaviors in mask-wearing and social distancing are grounded in political identities, that’s not something that is typically looked at in the epidemiological work, so the fact that we could zoom in on that and link it to attitudes, economics, and politics, is really a unique combination.”

The team also has been gathering Twitter content from those who have been surveyed, giving the project an additional social media database for further study.

The project was initially funded by the National Science Foundation, and later won funding from the Russell Sage and Knight Foundations and Amazon as well as direct support from Harvard, Northeastern, Rutgers, and Northwestern. The team will seek additional support to evaluate the recovery period and beyond. "How will our country have permanently changed due to the pandemic, economically, socially, politically? And how does this vary state by state, family by family?" said Lazar. "We will not be the same country after this crisis has passed."

Ognyanova said the combination of immediate and in-depth research was central to the project’s impact. “Beyond the real-time state of affairs right now, we want to also understand the long-term impact—how the pandemic disrupts social life, how it affects politics, how we can deal with a crisis of that magnitude in a better way in the future,” she said. “We want to know how it impacts institutions, how it affects people’s trust in political actors, in scientists and medical professionals. The big picture is dramatic and fascinating.”

—
Banner image: A healthcare worker administers a shot of the Moderna COVID-19 Vaccine to a woman at a pop-up vaccination site in New York City. Photo by Mike Segar/Reuters

Inline image: A woman from the University of Charleston gives a senior citizen a COVID-19 vaccine. Photo by Stephen Zenner/SOPA Images/Sipa USA

Survey finds majority in U.S. believe it is unsafe for schools to reopen in fall