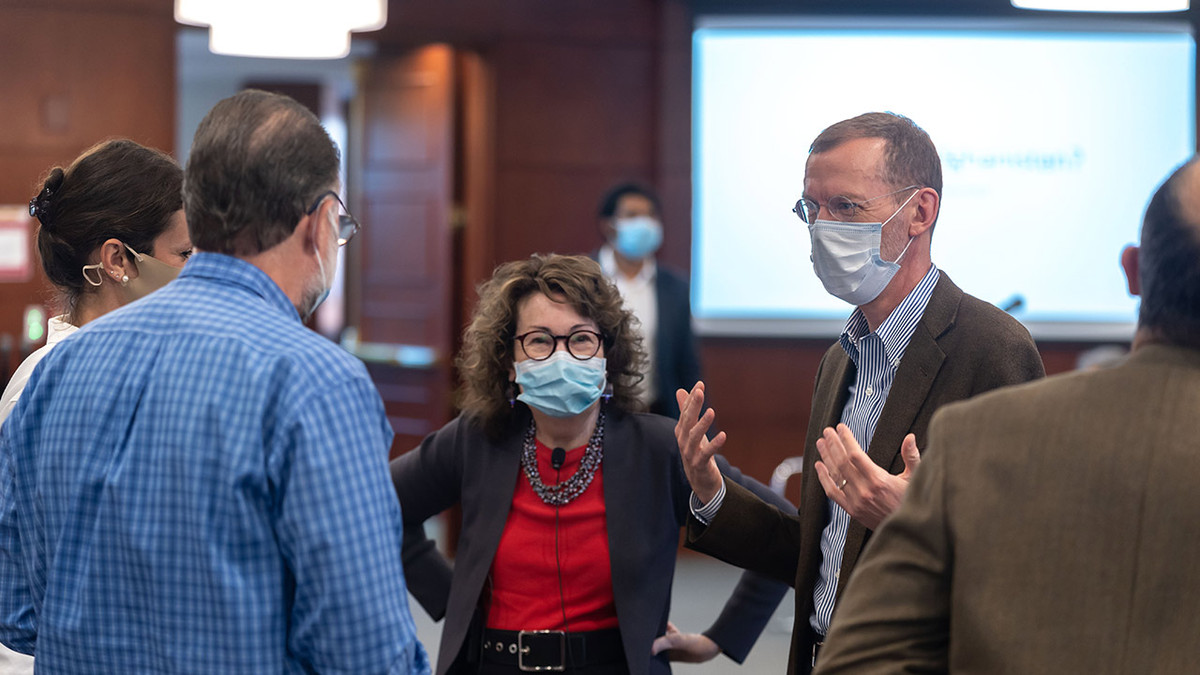 In a discussion as varied as the panelists, a few hopeful themes emerged from an evaluation of how Afghanistan might move forward.

The second Dean’s Discussion of the semester explored Afghanistan's complicated future following the end of the U.S. military presence. Moderator Sarah Wald, the dean’s chief of staff and an adjunct lecturer in public policy, began with a broad question: What’s next for Afghanistan? Three HKS faculty members provided perspectives on what it would take to develop a safer and more prosperous country.

Economist Ricardo Hausmann, the Rafik Hariri Professor of the Practice of International Political Economy, said his focus was “on the numbers,” which led him to a startling conclusion. “We, the economists, lost Afghanistan,” he declared. He detailed the massive amount of military spending the United States devoted to the country, equivalent to almost 600% of GDP in 2012, down to 200% of GDP in 2020. Unfortunately, as military spending went down, aid was also cut, triggering a decline in GDP per capita of 14% between those two dates and an increase in poverty.  “From a macro-economic view, if the cutback in military spending had been combined with a major increase in aid, it would have probably helped the society to move towards prosperity and the Afghan government to win more hearts and minds,” he said.

Lecturer in Public Policy Zoe Marks drew on her expertise in political violence to discuss conflict, humanitarianism, and peacebuilding prospects. She pointed out that escaping the conflict trap – the 30-60% likelihood of civil war relapsing – is the greatest challenge facing the country and its deeply patriarchal new regime. “The Taliban is the only violent movement in the past 20 years that completely excludes women, and the largest movement to do so in history; that is what makes it unique,” she said. “They are building a coalition of men, designed to leave women out of organizational power. It is so hard to get out of conflict,” Marks said.  A new government will need to earn the trust of the communities they occupy.  “Local relationships and social ties will be key to rebuilding society.”

While all the panelists recognized the continued toll of the violence in Afghanistan, Asim Khwaja also pointed to a strong community structure and recognized the sheer resiliency of the Afghan people. Khwaja, who is the Sumitomo-Foundation for Advanced Studies on International Development Professor of International Finance and Development, gave examples of crises faced by the Afghan people throughout their history.  He also said nations facing challenges sometimes can help build large civil society responses. He mentioned the success Bangladesh had with nongovernmental organizations  created following natural disasters and political upheavals. “During crisis, NGOs can help create models of governance that create more local responsibility,” Khwaja said. He leaned on his work as a micro-economist, arguing for the long view for Afghanistan's recovery.

This was the second of three events focused on Afghanistan. The third and final Dean’s Discussion of the fall term will take place on November 8 and will examine what’s next for international relations now that the United States has withdrawn from Afghanistan. Faculty speakers will be Graham Allison, Kathryn Sikkink and Stephen Walt.