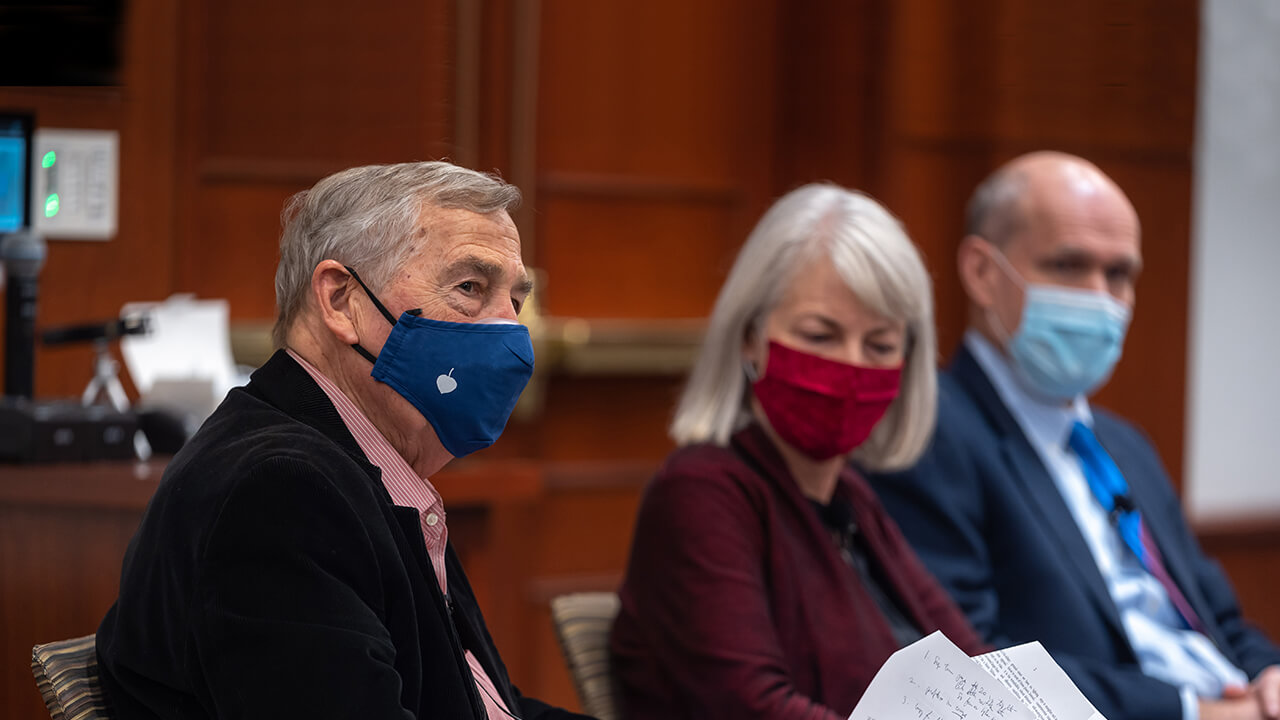 A prevailing view in the American foreign policy establishment is that the hurried U.S. military departure from Afghanistan badly damaged American credibility by abandoning allies and accepting the Afghan government’s defeat at the hands of the surging Taliban forces.

Some of the most senior international relations professors at Harvard Kennedy School disagree.

At the third and final Dean’s Discussion on Afghanistan issues this fall hosted by Dean Douglas Elmendorf, moderator Sarah Wald, the dean's senior policy advisor and chief of staff, asked the faculty panel about media commentaries that the messy withdrawal spelled the end of the United States' reputation as a foreign policy leader.

Former HKS Dean Graham Allison, the Douglas Dillon Professor of Government, said the foreign policy failure for the United States was in having U.S. troops fighting for 20 years in Afghanistan, not the final withdrawal in August. “The anomaly was that we were there, not that we left.”

Allison described President Biden’s decision to stick with his campaign pledge to withdraw as “a profile in political courage, because he knowingly accepted the risk of being held accountable should there be another major terrorist attack on the American homeland. And he had an easy alternative, which was to follow his two predecessors and kick the can down the road.”

Stephen Walt, the Robert and Renee Belfer Professor of International Affairs, noted that at the time of the withdrawal in August, “there was a rather hysterical chorus of voices insisting that the end game had done enormous damage to American credibility... I want to try to convince you that all this doom and gloom is nonsense.”

Walt said that “ending an unwinnable war in a peripheral area tells you absolutely nothing about America’s willingness or ability to defend more vital interests.” He said the key is what the United States would do regarding Taiwan or the Baltic states or South Korea, not what it did in Afghanistan. And the U.S. ability to act in those vital areas may now increase “if we’re no longer bogged down in squandering resources in the middle of central Asia.”

“So, our allies elsewhere actually ought to be reassured by this rather than upset,” he said. Regarding the exit from Kabul, Walt said “there was no way to get out of Afghanistan neatly. The Afghan government was a house of cards despite 20 years of American help.”

Kathryn Sikkink, the Ryan Professor of Human Rights Policy, said the larger policy mistake was carrying on the war even after the Taliban and Al Qaeda were quickly routed in December 2001. She said the 223,000 war deaths in Afghanistan and millions of displaced people since then bear out the argument from human rights scholars that warfare itself is the worst source of human rights abuses.

Sikkink blamed every actor in Afghanistan for these rights violations, from the Taliban and Al Qaeda to the Afghan Army and the U.S. military.

“So, if one of the defining characteristics of this period was human rights violations, it calls into even more question the power of military intervention to prevent human rights violations,” Sikkink said. “I think it exacerbated the cycle of conflict. It led to more recruitment for the insurgents. It made it more difficult for the government to carry out its other goals of stability and governance.”

Allison responded that while he had advocated withdrawal much earlier once Osama bin Laden and Al Qaeda had been defeated, and applauded Biden’s decision to withdraw from what was not a vital interest for the United States, the inconvenient truth we should not minimize is that many human rights Afghans were exercising during the U.S. intervention are now being quashed by the Taliban regime.

He cited evidence about improvements in Afghans’ incomes and health, the dramatic rise in the number of girls in schools and universities, and women's rights. “Many millions of Afghans began to live lives like normal human beings…. And now all this was crushed.”

Allison added that U.S. withdrawal in December 2001 would likely have ended in some version of a civil war.  But Walt disagreed, arguing that if the United States had pulled out then, Afghan political players would have sorted out their own future, perhaps with ugly results, but “what wouldn’t have happened would have been the intervening 20 years of war in which a quarter of a million people died.”

(The Dean’s Discussions are a series of faculty conversations held each term for the HKS community on topics of broad interest.).