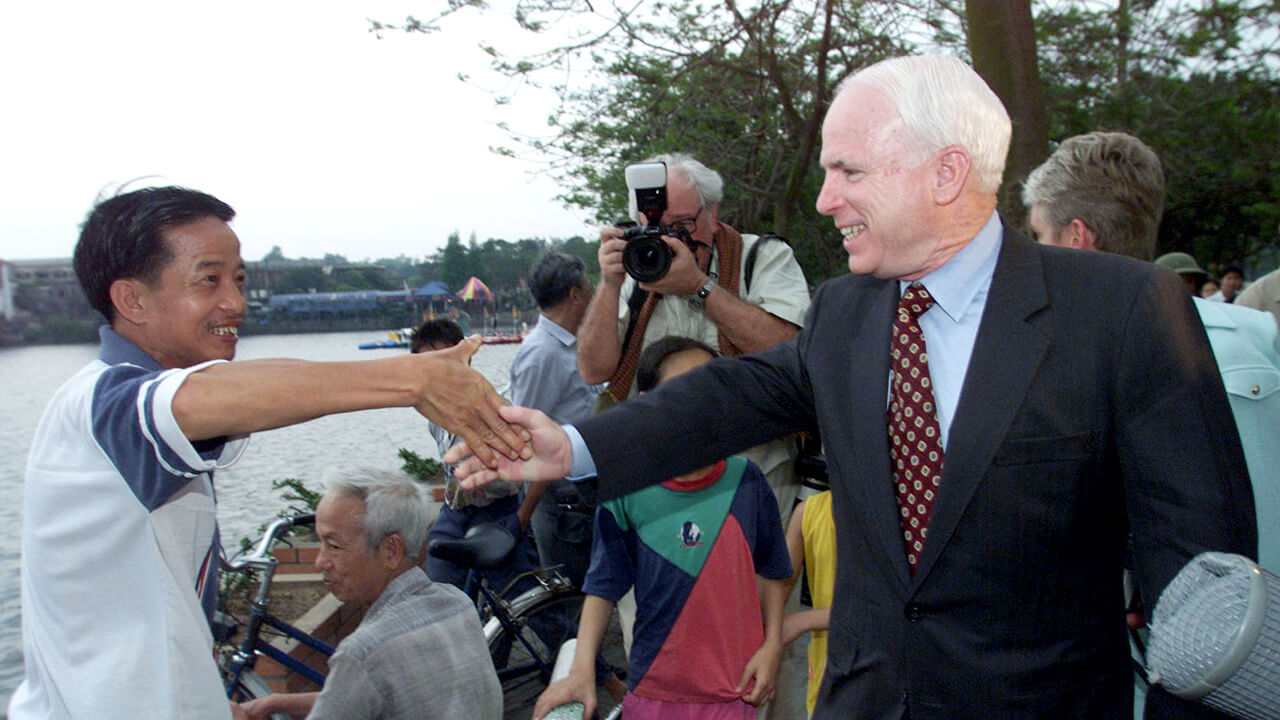 As much of official Washington gathered in the cavernous nave of the Washington National Cathedral earlier this month to pay their final respects to the late Senator John McCain, Harvard’s Thomas Vallely MC/MPA 1983 stood among former presidents, cabinet secretaries, members of Congress, and military service members to say goodbye to a friend of 30 years with whom he had worked to reshape U.S. policy in Southeast Asia.

Vallely, senior advisor for mainland Southeast Asia at Harvard Kennedy School’s Ash Center for Democratic Governance and Innovation, was like McCain, a decorated veteran of the Vietnam War who later led an effort to heal the wounds of that conflict by working to restore relations between Hanoi and Washington. At an Ash Center event last week (September 7) to commemorate McCain and his role in that reconciliation, Vallely harked back to the mid-1980s, when, barely a decade after the fall of Saigon, “people were beginning to think, ‘Should the United States re-establish some connection to Vietnam?’”, Vallely said. “John was the first significant person to go to Vietnam to explore that idea.”

Elected to Congress in 1982 as an Arizona Republican, McCain quickly went to work advocating for the establishment of a U.S. interest section inside the French Embassy in Hanoi. He was pilloried for the idea, but Vallely was intrigued by the proposal. “McCain didn't have a lot of people defending him, but I did,” Vallely said. “Because I defended John, we became friends. That's how we started.”

Vallely visited Vietnam for the first time since the end of the war not long after McCain had done so. “John and I were both exploring and learning about Vietnam, both seeking to understand how the two countries could achieve closure from the war and move forward,” he said. Vallely’s path took him to Harvard, where after a career in politics in the Massachusetts State House, he was recruited to join the former Harvard Institute of International Development by its then director Dwight Perkins, the Harold Hitchings Burbank Research Professor of Political Economy.

“With Dwight, we started to think about Vietnam in the context of what HIID had been doing in countries like Indonesia and Malaysia and began to ask ourselves, ‘How would Vietnam emerge?’” Vallely helped plant the seeds for what eventually would become the Harvard Vietnam Program, and started developing a firmer understanding of Vietnam’s political landscape. “At the time there were no diplomatic relations between the United States and Vietnam—so there was no embassy, and no political officers or people on the ground in Vietnam who had a knowledge of contemporary Vietnamese politics. We helped fill that void.”

As Vallely worked to build the Vietnam Program at Harvard and expand contacts with the senior government leaders there, McCain was elected to the U.S. Senate, where he, along with fellow Vietnam veterans John Kerry, Chuck Hagel, and Bob Kerrey, helped shape the national conversation over normalizing relations with Vietnam. McCain pushed the government in Hanoi to shut down its “reeducation camps” housing prisoners from South Vietnam, give a full accounting of U.S. service members still listed as missing in action or prisoner of war, and take steps to secure a political settlement in neighboring Cambodia.

“It's hugely important, the work the Senator McCain, along with these other senators and the administration, did in the 1990s to normalize relations, to put to rest what I think is a kind of pernicious notion, which is that Americans were left behind on purpose after the war,” noted Fredrik Logevall, the  Laurence D. Belfer Professor of International Affairs and co-panelist at the Ash Center event. “He poked, prodded, and cajoled presidents, party secretaries, members of Congress, and war veterans to put history behind them and help rewrite a new chapter in U.S.-Vietnam relations,” said Vallely, looking back at the nearly decade-long effort to restore ties.

With full normalization between the two countries achieved in 1995, McCain and his allies in the Senate worked to help strengthen the educational ties between the U.S. and Vietnam. “He was a great supporter of our work here at Harvard training the emerging generation of Vietnamese public leaders,” Vallely said. In the Senate, McCain worked to help pass legislation to fund academic cooperation and exchanges between the two countries, including the Fulbright Economics Teaching Program (FETP), an independent school of public policy in Ho Chi Minh City that was administered by the Kennedy School’s Vietnam Program.

Vallely, who has spent the last five years working to transform FETP into Fulbright University Vietnam, the country’s first independent not-for-profit institution of higher education, sees this institution as a testament to McCain’s legacy and commitment to the free expression of thought and ideas. “Fulbright University encapsulates many of the things that John McCain stood for,” Vallely explains. “It represents the idea of an open society and an open set of ideas without having to say you need to be exactly like the United States.”